All things considered, reinvention isn’t a new concept. Some like to call it a reboot. Some prefer to live in nostalgia and hope that no one screws that up (including or at the time) For example, many like to think the original is always better. I learned a long time ago that we have preferences and someone will always complain. I always like to complement those who take on such an endeavor. It brings light to the fact that whether or not you liked or didn’t like it, you watched, read, or participated in it.

The Teenage Mutant Ninja Turtles are no exemption to a reboot (if you will), reinvention was just what the doctor ordered. Roughly 19 months ago, IDW did just that. They took the comic rights and have done something I didn’t think was possible. I know that many turtle fans stick to the cartoons, and if it wasn’t for this series, I think I would have been one of those fans.

Tom Waltz, Kevin Eastman and Dan Duncan took on the turtles in a way that I now adore. Waltz and Eastman seem to have an amazing talent for flashbacks leaving the reader wanting more. Eastman doing a variety of plot, and layouts with Waltz doing script, I still find it hard to believe that I can hold an issue of the turtles and knowing that it will continue. Bonus, it took me literally 5 seconds before I fell in love with Dan Duncan’s art style presenting the turtles in a manner that fits IDW and the current feel of comics in general. The trio does a bang-up job of intertwining the current timeline, with past events that help the reader piece together how they end up where they are.

It reads relatively slowly (due to backstory), but after issue 5, Splinter leaves the reader with an understanding of reincarnation and a desire to follow the turtles to unknown adventures (which aren’t limited to origins, newly re-spun turtle tales, and a variety of other breath-catching action!). In keeping with the original series, many of the key characters are the same: the brothers, Splinter, Casey, April, Shredder, Baxter, and a few others who tie this new series to a level that keeps it fresh.

I figured I’d take the time to give my opinion and mention my quirks with the series. So if you’re looking for helpful hints of who knows what, you might want to stop. More than likely, I’ll be spoiling things for certain individuals who failed at their fandom. Epically.

The best way to catch up to its current run would be via trade paperbacks due to the rise of the current Nickelodeon Television series and the rumor mill of a new movie. Currently, IDW has four trades.

Issue one was such a surprise for me due to the fact that I was late to the party. I found out literally days before and without a subscription or box, it made it difficult to obtain such a piece and it’s many, and I mean many covers. Reprints aren’t always the same, but nonetheless, victory was mine along with issue two. Compliments to the editor, Bobby Curnow, for allowing Eastman and Waltz to comprise the story in a fashion that many didn’t expect; unless, you are April and somehow become omniscient (Wouldn’t that be neat? Like Deadpool but from a girl’s perspective? Lady Deadpool?). Good for us, that doesn’t happen in issue one.

The first panel is half a page and presents a battle between Hob, a catlike mutant, and Splinter with three of his sons. Banter of peace leaves the reader to page two. A full two page panel depicting a-first- blood- battle initiating and leads the reader with the expectation we all come to follow; ninja-kicking butt. Following the battle of goons and heroes, the story unfolds explaining their fighting style, training and witty banter that follows more the Mirage universe than the Cartoon.

By the end of the fight panels (page 7), we find that Raphael is missing and we flashback to a laboratory, where we are introduced to April, Stockman and Dr. Allen. Each plays a piece to the music foreshadowing an orchestration that is still played out in the current issues. I have to say that each panel is done beautifully by Dan Duncan and colored eloquently by Ronda Pattison that goes well for the series and IDW. Not a lot of over sketching, or an abundance of digital paint. It flows well and for that alone I feel helps glue the story to make it a great book. The final pages leave us with Raphael’s perspective, being alone, rummaging and unsure who he is. Then, all of a sudden, we move to Casey and his dad beating on him, drunk-and-all; Raph busts in and boom. 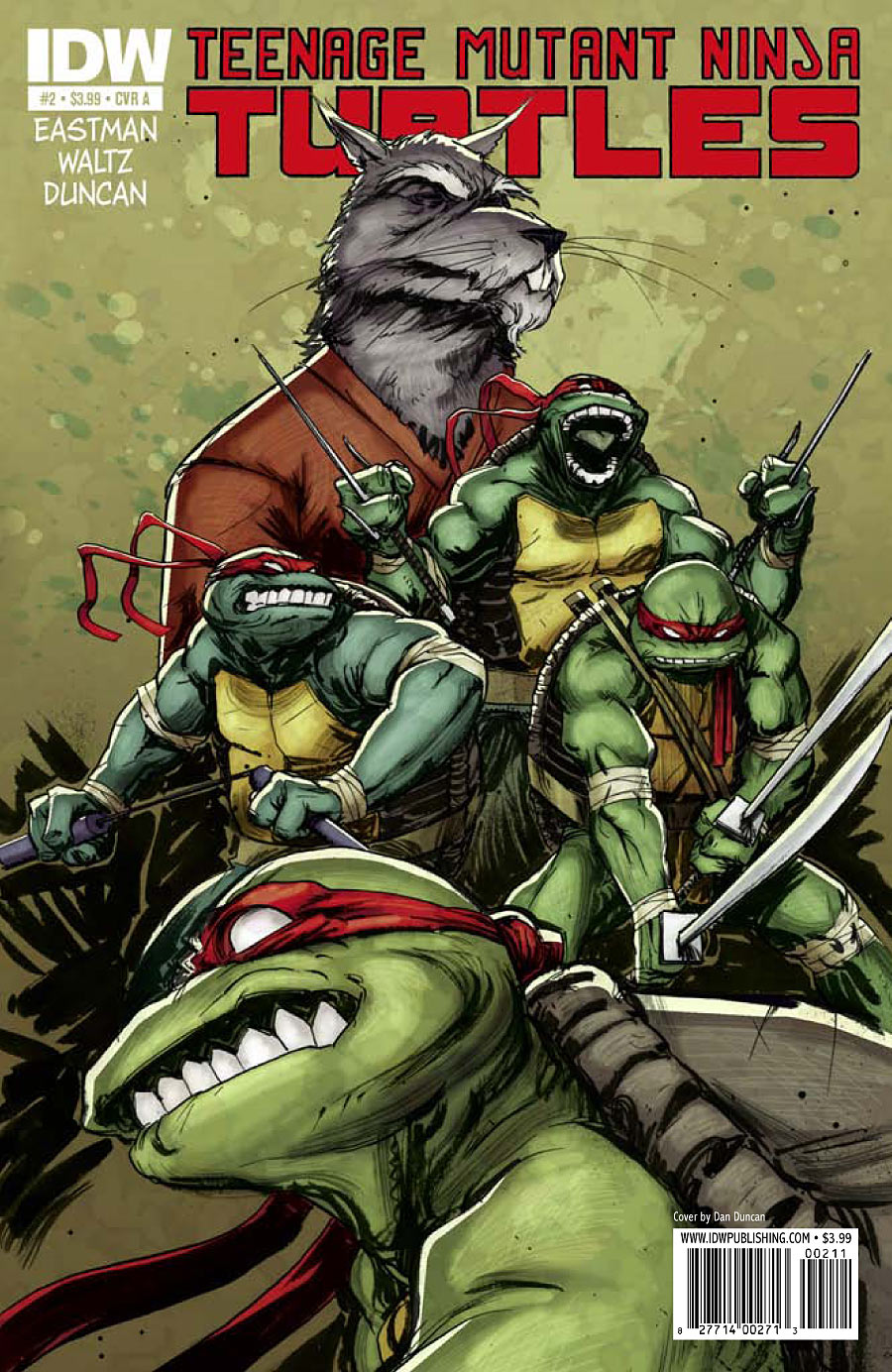 Issue two for me was something to be desired since I missed out on the epic issue one, it was nice to hold in my hand the bare-minimum cover A. Now I have to mention that already being a cover whore, it pains me even more so to find that there are at least three covers per issue. Two covers that run 75/25 % and one that’s 10%: do the math, it sucked for a long time trying to capture them. Almost as bad as Pokemon. I said almost.

Issue two picks up immediately after issue one with a gnarly battle between Raph and Casey’s dad, not in a hero/villain, but more of someone standing up to Bullies and being in education, it makes my heart smile to know that the genuine nature of comic books still exists, but another topic for another time. Another flashback to the lab that April works at leaves us with Splinter in rat form (with mind alterations) helping guide April to protect “secret” information of all the lab tests that are being done by Baxter and the “hand known” General (because at this point, we’ve only seen a hand).

Ninjas are a funny pop culture reference that I’m not sure I understand, simply because they aren’t mutant turtles, but that aside, Splinter helps April dodge them, and he helps recapture the material but gets knocked down into, wait for it, ooze. Again, we meet the future Hob, who had captured the baby turtles (presumably for dinner).They all scrounge around in the ooze, while Hob gets beaten by Splinter (which ties in from page 1 of the first issue). Finally back to present day, the turtles are gathered around listening to Splinter talk about the importance of finding their brother. I have to say that the dialogue is relatively short up until now. Don’t worry though, the next page we don’t become as lost as Splinter says we are them out to be (Great writing technique; Omniscient, yeah!). Raphael is busting up some hoodlums with Casey and apparently old ladies are not to be trifled with. Handbags must be a lethal weapon somewhere.

Issue three starts with the above mentioned old lady ungrateful for a mutant turtle and a hockey player saving the day. It is slower due to more backstory and soul searching on the part of Raph. We do however get to know Casey more and all the stories intertwine fantastically. I am thankful that we do get to learn about the relationship between the two, and more sincerity in the turtles training. I have to say that I like the dramatic effect that Eastman lays out and with Duncan’s style filling in the pages make it easy to read, follow and desire more.

I have to interject here and say that as a teacher, I find it rare in current literature to find subtle foreshadowing. It took me years to figure out how to piece together something before it was presented, even if you enjoy saying, “My dear Watson, I got it!” The story telling is one that I haven’t seen in ages. Now there are other series from different companies that are just as spectacular but being a turtle fan, it’s nice to see this kind of storytelling (at least in a comic). Due to this series, I wouldn’t have had the desire to go back and read/collect the original series. 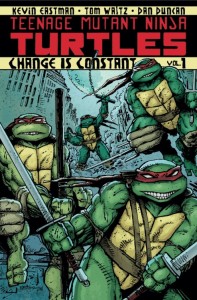 In the original series, I find that Laird seemed to have been a better story teller, but over the years I have noticed that Eastman has become a greater talent than he had been. He’s an interesting man, very friendly and polite. I’m still curious if he actually read the Journey into Mystery that he picked up a while ago, or if he did it just to pop into the shop. Either way, it was nice to meet a man outside of the comic realm and talk to him as a customer rather than an artist. If I distracted the reader’s interested in knowing more about issue four, well I have to leave something to be desired. Side stories are always a fun anecdote. Otherwise I doubt you’d pick up the trade (or single issue). I do have to say that the turtles are reunited and the initial story arc finished with some minor plot points that get unveiled the next trade.

It is a great ride and I’ve loaned out my unsigned trade to about 6 different people now and half of them have subscriptions with another two picking up just the trades. I only recommend a few comic series over the years and with Marvel NOW and DC New 52, it can get overwhelming with the massive explosion of new launches, but I will always say that it’s nice to know that I have a constant in the comic universe. If you’re a fan of the original cartoon, you might be disappointed. It’s not as slap happy. If you’re a fan of the new cartoon, you might be impressed. No way to know for sure, but pick it up, you’re your US$17.99 will not go to waste.