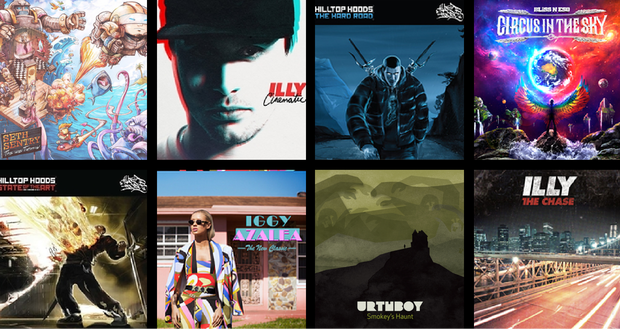 Everyone is talking about Iggy Azalea. She’s a big deal. Iggy is the first female rapper to top the US Billboard chart since 1998 (when Lauryn Hill’s classic ‘Doo Wop (That Thing)’ had us enthralled). While ‘Fancy’, featuring the awesome Charli XCX, has been at number one, the Aussie rapper’s effort with pop princess Ariana Grande has propelled to number 2. Azalea’s position at number 1 and 2 on the Billboard Hot 100 is something previously only achieved by The Beatles. Like I said, she’s a big deal.

But is she really an Australian rapper? While Azalea (born Amethyst Amelia Kelly) was born and raised in Australia, she felt an incredible pull towards the US. Wanting to be a rapper, she decided she had to be where the genre had begun. She ran away from home at the age of 16, flying herself to the US. During her time there, she has perfected the copycat sound of deep-south rappers. Listening to her music, you would never know where she came from (apart from her references to Australian summers, etc). Even Azalea’s video for ‘Fancy’ is an appropriation – remaking the successful film Clueless in a music video. Her pop-infused, ego-heavy, over-produced rapping makes Iggy Azalea an American rapper who happens to be from Australia.

If Azalea had bothered to look around her, she would have found a thriving hip-hop community alive and well in Australia. Of course, the Australian hip-hop industry has been heavily influenced by America. With the Internet age, the exposure of US artists, TV, and film is unprecedented. It would be hard for Aussies to avoid it. And why should they? Appropriation of other’s styles is as old as music itself (the King did it, why shouldn’t everyone else? As Eminem put it, ‘I’m the worst thing since Elvis Presley to do black music so selfishly’.). But as hip-hop in the US has moved into the more mainstream, merging itself with pop music, Australia has held onto influences from an older generation of American hip-hop.

My first experience with Australian hip-hop came in 2002 with the 1200 Technique’s single ‘Karma’ from their album Chosen One. Two years later, they released Consistency Theory, with my favourite single from that album being ‘Eye of the Storm’. But it was between these two albums that Aussie hip-hop really blew up onto my radar (and the rest of Australia’s). In 2003, the Hilltop Hoods released their third album, The Calling. ‘The Nosebleed Section’ was the lead single, making it onto the Triple J Hottest 100 of 2003, as well as being no. 17 in the Hottest 100 of all time (as voted for by listeners in 2009).

But what is the identity associated with Australian hip-hop? Has it really defined itself as separate to the traditional ideas of hip-hop? Much of Australian popular culture encourages the Aussie battler myth, focusing on hardships of the working class as they beat adversity. Australian hip-hop is no different. But is this really original for hip-hop? Think of the Notorious B.I.G.’s classic hit ‘Juicy’, the opening of the song is dedicated to his hardships before making it big (‘Yeah, this album is dedicated to all the teachers that told me / I’d never amount to nothin’, to all the people that lived above the / buildings that I was hustlin’ in front of that called the police on / me when I was just tryin’ to make some money to feed my daughter, / and all the niggas in the struggle, you know what I’m sayin’?’). This is a common theme throughout hip-hop music, no matter the country of origin or the style it is delivered in.

Another Australian cultural tradition popular in all forms of Australian creative culture is the larrikin. For those of you unfamiliar with the term, it means a hooligan, hoodlum, or generally rough urban youth. While the term larrikin might be unique to Australian, hooligans are no strangers to topics of hip-hop songs. Partying hard with a disregard for societal conventions is endemic of hip-hop from the US. It also goes hand in hand with the ‘battler’ vision – once the hardships have been overcome, these wild young people have the resources and inclination to stop giving a fuck.

So what, if anything, sets Australian hip-hop apart from its influential big brother (US hip-hop)? Even with more mainstream success achieved, Australian hip-hop has continued to embrace a sound (and an attitude) of an underground musical movement. The samples used and the general embrace of more serious political topics and psychological insights rather than turning the focus of the songs into something that Lorde’s ‘Royals’ might poke fun at, ensures that Aussie hip-hop retains a kind of credibility that American hip-hop has been lacking since the early nineties.

Will Iggy Azalea’s chart-topping reign prompt Australian hip-hop to change drastically, incorporating more mainstream pop sounds and over-produced sounds? I hope not. While America’s influence is important and not to be dismissed, I hope that Australian hip-hop artists can continue to carve Australia’s own hip-hop identity.

Previous: Lies my TV told me
Next: The Name of the Wind: You have to be a bit of a liar to tell a story the right way