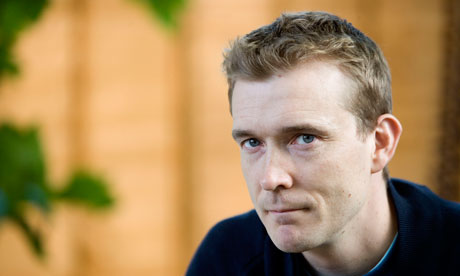 Following in the footsteps of other authors who have used Twitter as a storytelling medium (such as Neil Gaiman, Philip Pullman, and Jennifer Egan), Mitchell has begun publishing a 6,000 word story on Twitter. The story will play out over 280 tweets, published in the next 7 days, with 20 published at 7am and 5pm each day. You can follow the story at his Twitter account @david_mitchell. The story follows a 14-year-old boy who discovers his mother’s Valium prescription. The enforced succinctness of the tweets is meant to reflect the thought process of the character on a Valium high.

The short story, while a story in itself, is linked to his new novel, being set in the same universe. It’s an interesting marketing ploy – giving readers a taster of what they might expect in his new novel in short, easy-to-read snippets and on a free medium. When talking to The Guardian, Mitchell mentioned he hoped to fit in the 140 character limits of Twitter’s system into the story so that it didn’t feel gimmicky. I’m not sure how he’ll manage that. It stinks of gimmicks – and yet, I’m hooked.

My hope is then that the rationale for deploying Twitter comes from inside the story, rather than it being imposed by me, from outside, as a gimmick.

I think it will be very interesting to see how a story plays out this way. Writing long-form prose tends to get authors in the habit of feeling the freedom of length. They can make the content as short or long as what works for the story, and individual sentences/sections? Well, they can be completely varied. Long, complex sentences or rolling description won’t work for a story depicted over a series of tweets. How will these restrictions alter Mitchell’s writing style?

This is yet another example of how the modern writer has to be somewhat more than a writer – they have to be savvy marketers too, engaging their readers in new ways to retain their readership.

News via The Guardian and Bookseller

Previous: Teen pop stars: Where are they now?
Next: Is it art or is it pornography?