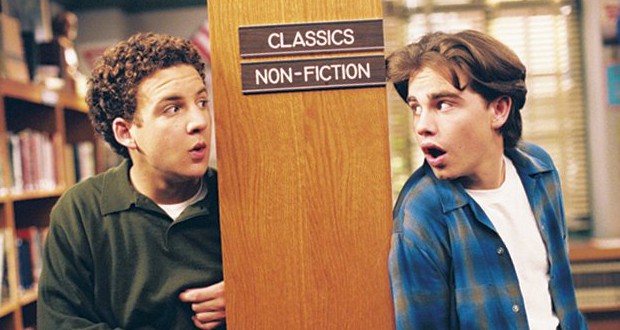 Friendships are the back bone of every great TV series, as well as every lasting romantic relationship. While the 90s gave us one of the most iconic sitcoms of all time, Friends, it was the friendships in other 90s TV shows that have really stuck with me over the years. Of course, everyone will have their favourites, but here are my top 10.

10) Sabrina and Salem in Sabrina the Teenage Witch

What was not to love about a power hungry warlock sentenced to thousands of years as a house cat? If Salem weren’t already brilliant, his relationship with the titular Sabrina made him even better. There was a strange companionship between the two, each going to the other for advice, even on the most trivial (teenage boy trouble) or outrageous (how to take over the world) issues. And even if they didn’t always see eye to eye, they could always put aside their issues for a good kitty cuddle. Can you blame them?

These two were truly incredible. While never overtly stated, it was obvious to everyone who paid attention that these two badass women were more than just best friends (trust the Kiwis to be well ahead of the curve, they’ve always been wonderfully progressive!). As lovers, maybe they don’t belong in this list, but I say they do. They always had each other’s backs and were always challenging one another. Finding a friend who keeps you on your toes can be difficult, but when you find them, keep them close. Whether they were just friends, travelling companions, adventurers, or lovers, anyone would be lucky to have a friendship like Xena and Gabrielle.

Science fiction wins the award… all the awards… for pushing the boundaries of what is socially acceptable and normal. With each new incarnation of Star Trek, more politically charged areas were covered. For Deep Space Nine, one of the issues they tackled was gender in the form of Dax.

Dax is the symbiont living within the trill woman Jadzia. In his previous incarnation, Dax was a good friend of Sisko’s, who continues their friendship during the Dax symbiont’s joining with Jadzia and later Ezri. I always loved that Sisko referred to his friend as ‘old man’, even while in the incarnation of a hot young woman. But even better, Dax was able to bring many lifetimes of wisdom to any situation. She could reflect on living a life as a man or a woman (and Dax’s sexual orientation was far from pigeonholed), as well as enjoying more outlandish tastes than most humanoids on the space station tended to.

Tommy and Chuckie are the ultimate complementary pair. Tommy is all action (total braun over brains, that one), while Chuckie is timid and self-conscious. Tommy encourages Chuckie to come out of his shell and live life to the full, while Chuckie keeps his pal Tommy from getting into too much trouble. And hey, how great is it that they don’t mind the age difference either (I mean clearly there’s a bit of a gap there, Tommy is a baby in diapers while Chuckie is a proper kid in a killer outfit and sneakers)? I was always more of a Chuckie than a Tommy, but oh how I wished I could kick off my trousers, hang out in just a diaper, and throw my cares to the wind… or something to that effect.

From the very first episode of Kenan and Kel, ‘The Tainting of the Screw’, we are introduced to a set of devoted, though larger than life, friends. Kenan is the initiator of action, finding new schemes every day, while Kel’s hapless nature gets him into trouble time and again. Over the course of four seasons and even a made for TV movie, these two rascals had us in stitches. Kenan Thompson went on to be the longest serving African American member of the SNL cast as well as the cast member to have performed the most impersonations. I think teen Kenan would be very proud.

These two are cousins, but just because you’re family, doesn’t mean you have to like each other. Right? Well, there’s plenty of good natured ribbing going on with these two but they always look out for each other in the end. It’s another one of those tropes where the ‘good’ kid finds that the ‘bad’ kid has a more positive impact on him than the other way around. Yes, that’s right kids, being an uptight clean freak all the time is not good for your health. Relax a little! Why not let the Fresh Prince help you with that?

4) Daria and Jane in Daria

I’m not sure any show has ever commented on the teenage experience quite so aptly as Daria. Or maybe it was just my teenage experience? Both outsiders, Daria and Jane find comfort in one another, never trying to force the other to conform to stereotypes. While Daria is introverted, Jane is more open and creative. Like all the best friendships, they complement each other perfectly.

3) Jack McFarland and Karen Walker in Will and Grace

For a show that was called Will and Grace, it was always Jack and Karen that made it interesting. I don’t think there was ever a scene with these two characters where I didn’t laugh. Usually, the laughter was so violent I was left doubled over and out of breath. If they weren’t slapping each other, they were being horrendously politically incorrect, touching their tummies together (…for some reason?!), and generally getting each other into trouble. On paper, both Jack and Karen are terrible people, and together as friends? They’re worse. But that’s why we love them.

2) The Scooby Gang in Buffy the Vampire Slayer

Where do I begin? When we first meet Buffy, Willow, and Xander, all three of them are awkward in their own ways. Over seven seasons we have the pleasure of watching them grow and change, welcoming new faces to the group and sadly saying goodbye to some we love along the way. While the ‘superhero’ aspect of Buffy drives the show’s premise and the overall purpose of her and her friends’ actions, what makes Buffy so strong is her friends. They keep her grounded in reality while demons constantly try to murder her. It’s no wonder Buffy succeeded where so many slayers before her failed.

When it comes to the greatest friendship in 90s TV… Oh, who am I kidding? The greatest TV friendship of ALL TIME… there is no other choice than Cory and Shawn. While contemporary shows like The Big Bang Theory like to make fun of Raj and Howard for their close relationship, Boy Meets World welcomed this close friendship. BMW recognised the beauty in a relationship as close and devoted as Cory and Shawn’s. Yes, Cory and Topanga were important, but it was Cory and Shawn that could truly never be torn apart. There’s no shame expressed by either of them when it comes to how they feel for each other, and why should there be? They are two heterosexual men who love each other. Tell me, what’s wrong with that?

A special mention also has to go out to Eric Matthews and George Feeny, also from Boy Meets World, cause those two were seriously cute. I mean, who wouldn’t want to experience the joy of Eric’s Feeny call?

What were some of your favourite friendships on 90s TV?

Previous: Theatre Review: Titus Andronicus
Next: Pass the whiskey and my laser pistol: Why we need more science fiction Westerns