Home / Film / Trumbo: What the imagination can’t conjure, reality delivers with a shrug 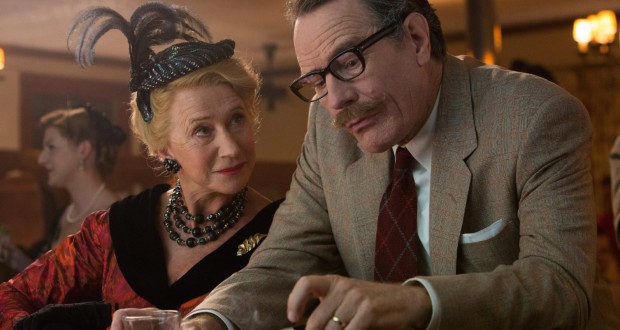 I find myself more and more disappointed with the standards of film advertising. If I have to be exposed to minute upon minute of trailers prior to ever feature, they could at least give me a fair idea of what else is on offer. Trumbo is magnificently ill-served by its advertising campaign. It looks every bit the Hollywood schmaltz-fest that would pander to lazy critics and passive audiences. And it’s not. I was genuinely surprised at how enjoyable the film was after the trailer set such low expectations. It’s nice to be caught off-guard once in a while.

Trumbo is about the American screenwriter Dalton Trumbo (Bryan Cranston). It follows the story of the communist witch-hunts in Hollywood from the late 40s through to the end of 60s. It’s about the cultural blight of the blacklist, which Trumbo was subjected to along with many of his friends, and how he attempted to undermine and overcome this oppression. It’s meaty subject matter and it does well to get the audience on side. Whilst not without some laboured attempts at heart-string-pulling, Trumbo is far more witty and substantive than it is being sold as.

Cranston is on form conveying Trumbo’s ticks and idiosyncrasies 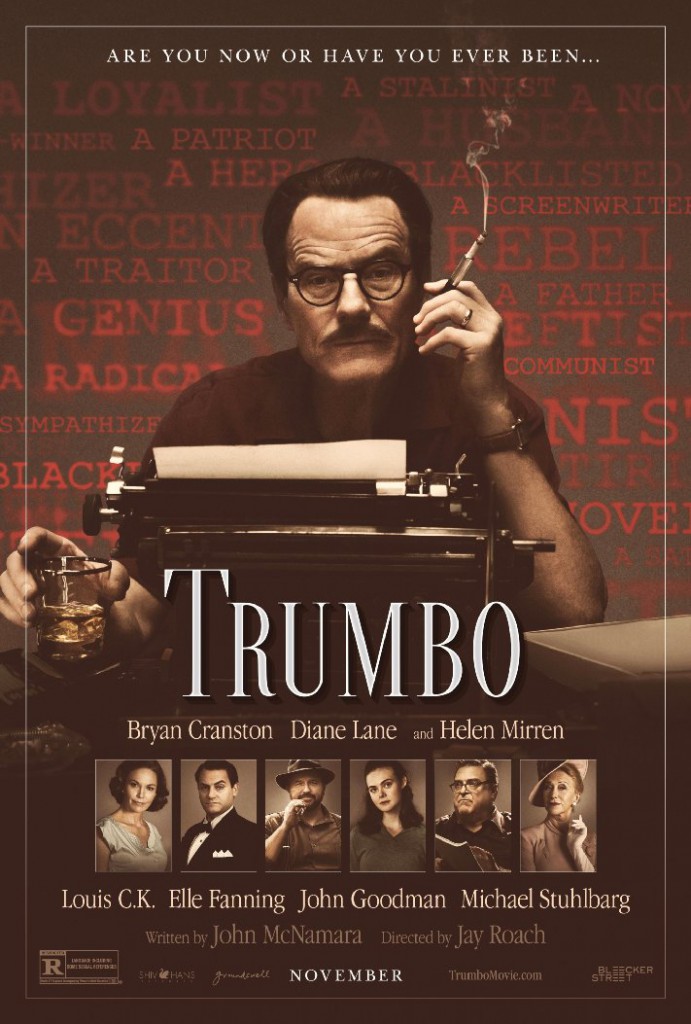 Fair warning, I am immediately susceptible to the subject matter. American political hysteria and the history of film are standing interests of mine so any take on them is gonna be of some import to me. There is a relish I think all audiences can take from the recreations of archive footage spliced in with the real stuff. It’s often held against a film if its performances come across more as impressions but I think part of the fun here is seeing some really uncanny impersonations of big names. Cranston is on form conveying Trumbo’s ticks and idiosyncrasies but it’s the more familiar stars in supporting roles that shine: Dean O’Gorman as Kirk Douglas and David James Elliot as John Wayne stand out.

Even if you didn’t have a predilection for the fare or the novelty value, Trumbo has a cast and performances sufficient to charm you. Trumbo is portrayed as the notorious (and admittedly at times insufferable) wit that he was, and the supporting cast are there to set up his punch lines and grandstanding. A good many of them deliver a great deal of quippage themselves. John Goodman can be relied upon to be entertaining in anything, Alan Tudyk knows how to score a laugh in a line, and Helen Mirren is on hand to deliver some much needed venom into proceedings. 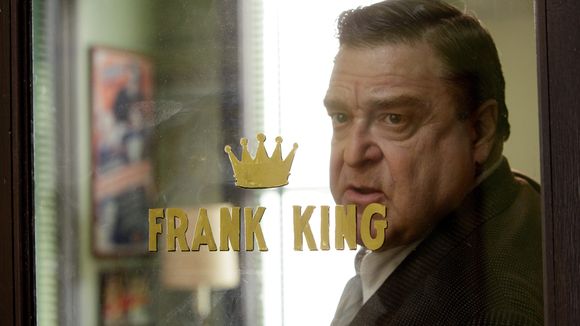 I really, really could have done without the maudlin efforts made to show the difficulties of Trumbo’s home life 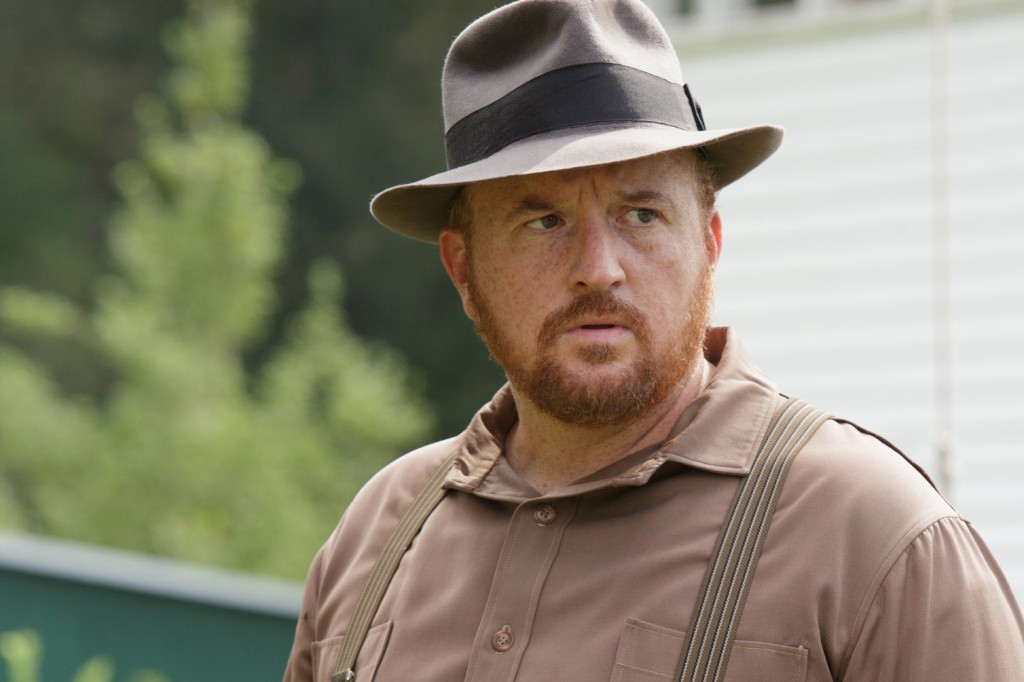 What weaknesses occur in the performances I think are less down to acting and more down to concept. Some of the cast, like Louis C K’s Arlen Hird, are composite characters and unfortunately show some of the conventional undercurrents of the film in their stereotypical role and arcs. They are there to hit the tired old story notes and form events around a neater movie narrative which we could do without. The main culprits here are, alas, the family.

I really, really could have done without the maudlin efforts made to show the difficulties of Trumbo’s home life once he was out of prison and on the black list. Not that the subject or the deterioration of his behaviour with a diet of booze and Benzedrine is unfit for coverage but it is treated as a theme nearly entirely divorced in its consequences to his efforts to overthrow the censors. And whilst the film industry narrative has interesting character conflict, witty remarks, and cinematic history to chew over, the family narrative is about as humdrum an all-American-nuclear-family morality tale as they come.

Woe betides any film that has to call upon Spartacus 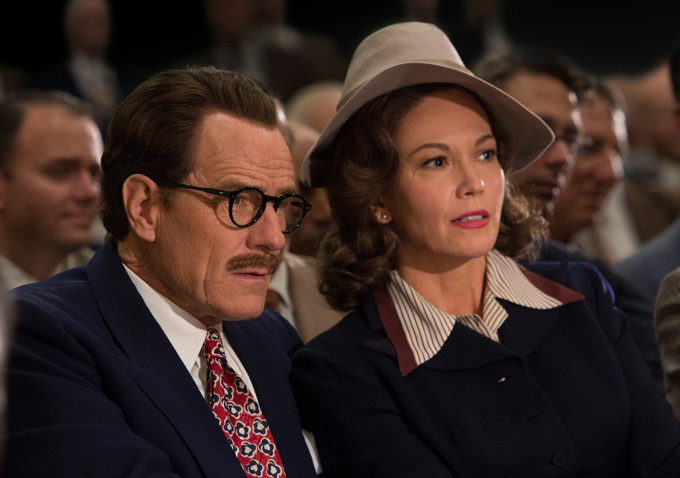 So the film has plenty of steam for the bulk of its narrative but there’s no doubt one part of its content is flabby and simply less interesting. The problem is that the criticism of Trumbo himself feels so disingenuous. The ‘difficult father’ arc feels impersonal because it is clichéd and the filmmakers pay no attention to plenty of his other flaws. As far as the film is concerned, he was simply a persecuted liberal leftie. No mention is made of Trumbo’s support for violent and oppressive communist regimes. It’s a hagiography with a tokenistic and half-hearted effort to add balance.

Uncritical shouldn’t be taken as bad though: it’s entertaining. It’s not that sophisticated but its rousing and funny, and effective at getting its point across. Darker and more vitriolic elements bubble away but never quite get out. It is something of a pity that the story of a lauded and ambitious screenwriter does not have a more laudable and ambitious screenplay. Of course the film refers Trumbo’s greatest work; and woe betides any film that has to call upon Spartacus. It is honestly good, but unlike the works of the great writer, it is never great.

Verdict: Trumbo is a damn fine outing but never quite reaches the standards of the man himself.

Previous: Pride and Prejudice and Zombies… and heaving bosoms
Next: Gianluco Pisano: DWAM at the Underdog Gallery