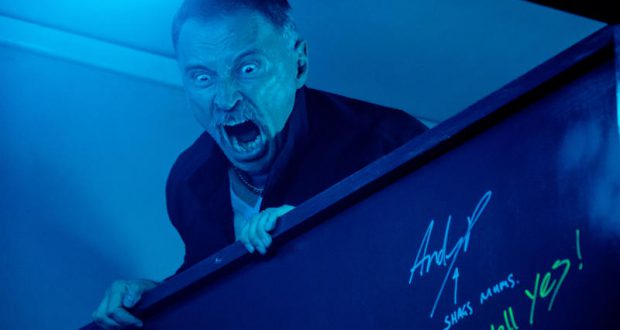 The unwanted sequel is a scourge upon our culture. We’re treated to washed-out rehashes of beloved originals that, at best, try our patience and, at worst, diminish the legacy of the original. It’s endemic of an industry chasing a dollar sign rather than having the courage or artistic wherewithal to invest in something new and innovative. My expectations going into Danny Boyle’s sequel to his seminal Trainspotting were low. I like being surprised.

T2 Trainspotting picks up with the remnants of the gang 20 years later, when Mark ‘Rent Boy’ Renton (Ewan McGregor) returns to Edinburgh. A web of circumstance and grievance draws the circle of former friends back together on his return. And if nothing else is apparent from the opening segments when we are reintroduced to Daniel ‘Spud’ Murphy (Ewen Bremner), Francis ‘Franco’ Begbie (Robert Carlyle) and Simon ‘Sickboy’ Williamson (Jonny Lee Miller), these people have not moved on with their lives. 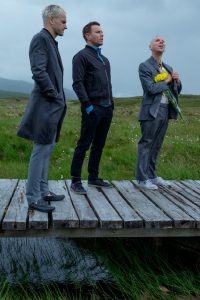 The reason I think Boyle’s outing works is because it is an anti-sequel of sorts. The whole thing is riddled with the sense that times have changed but these four men have ceased to progress from the squalid heyday of their youth. It’s an indictment of delusional nostalgia. The film overtly plays upon the legacy and style of the original but it does so in a way to suggest that there is nothing good about this atrophy. Whereas other directors are simply content to regurgitate the same product at you, Boyle actually has something to say about the folly of this endeavour.

Take the music, for example. Trainspotting was an icon for its soundtrack, its engagement with and championing of the contemporary music scene. What do we have here? T2 Trainspotting riffs on the same tracks, not a modern classic to be heard. And when we come to the diegetic music, it gets even more ridiculous. The only nightclub that is featured is playing ‘Radio Gaga’, brimming with youngsters nostalgic for a time that is not their own. In another segment, Simon and Mark sneak into a Protestant Unionist club where the boozy locals sing Catholic-bashing hymns to commemorate the Battle of the Boyne. Mark and Simon might sneer at these people, arrested in their development and resisting all the change of progress, but Boyle is clear. Mark and Simon are just as bad, and if we want to keep riffing on the same tunes and movies to appease our cloying nostalgia, so are we.

It is a strong film by any standards in its acting, directing and editing 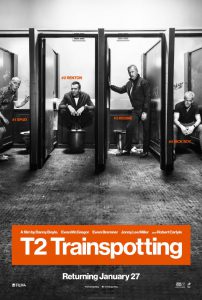 Boyle’s output may have its ups and downs but when he’s at the height of his powers, he can draw you in like no one else. His striking visual style and affected (at one time subversive) editing techniques recall the original without being too slavish, perfectly fitting his purposes. And let it not be said there is nothing new here. Kelly MacDonald gets a cameo but it is Anjela Nedyalkova who makes up the fifth wheel of this outing and she’s a very strong addition to the cast. I did worry at the halfway point that her character Veronika had little to do but ultimately she turns out to have more ambition and agency than the mopes that surround her. MacGregor is actually very restrained in his role, partly as a result of Renton losing his place as the audience surrogate and narrator. If you take nothing else away from the great acting chops of this film though, it is that it’s a travesty that Ewen Bremner isn’t on our screens more.

T2 Trainspotting has stuck with me longer than a lot of the films I have seen recently. Its calibre is not to be underestimated. Do I think it is as iconic or revolutionary as the original? No. But it’s a fitting follow-up and on its own merits has damn good reason to exist. If only we could expect all such sequels to be so rich.

Verdict: A genuinely satisfying and intelligent sequel to an icon of modern cinema.

Previous: Nostalgic Impulse: Ghost in the Shell
Next: The Stars Are Legion by Kameron Hurley