Home / Books / River of Teeth by Sarah Gailey: Always have a backup plan 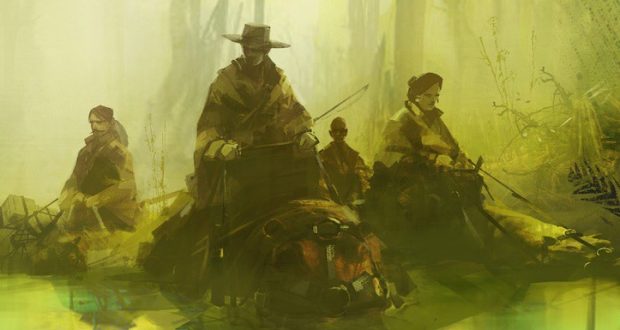 I have been looking forward to this novella since I interviewed Sarah Gailey almost six months ago (listen to the interview here). How could you hear this premise and not immediately want to read it? Hippo cowboys! I say again: HIPPO COWBOYS. Right?

The novella was just as fun as the premise suggested. When people talk about ‘the perfect holiday reads’, this is the kind of thing that comes to mind for me. It’s fun, tongue in cheek, action-packed. I just wish it wasn’t over so quickly.

‘Are they finally just comparing cocks and ’aving done with it?’ 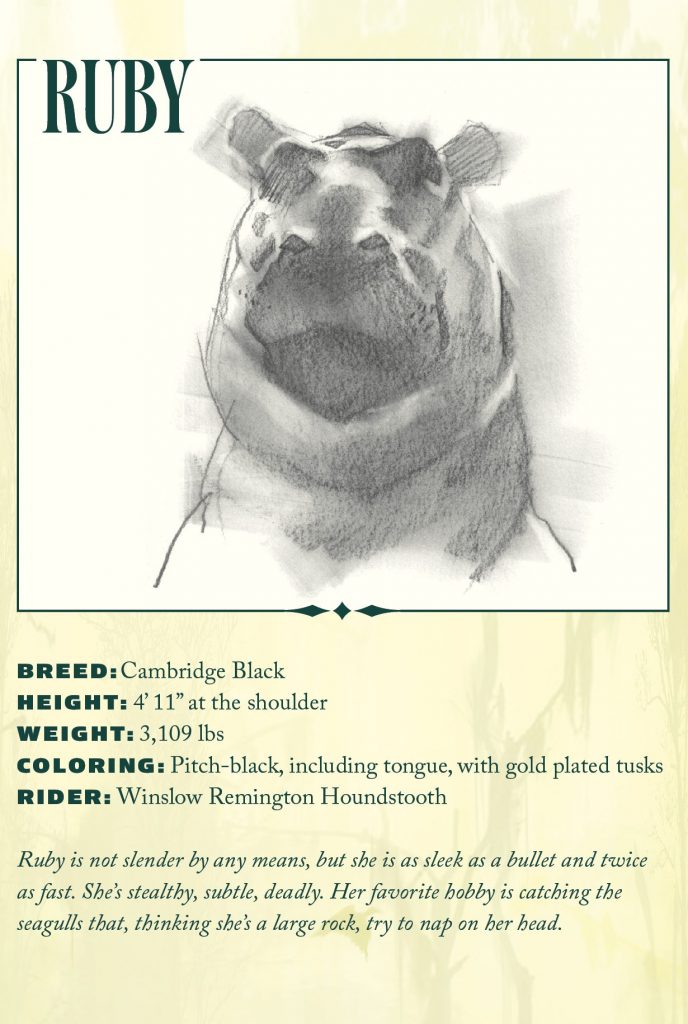 The novella extrapolates on a real-life event. When the US was facing a food shortage, the government floated the idea of importing hippos for farming. Of course, the idea was squashed – hippos are feral, dangerous, and HUGE. Sure, they would have provided a good deal of meat, but the infrastructure needed to farm them safely would have required an enormous investment. But Gailey runs with this idea and asks ‘what if’…

River of Teeth follows a group of criminal characters taking on a lucrative job for the government. No, this isn’t a tale of bad guys going straight – this is all about them using the opportunity to make some cash while enacting revenge. Leader of the group, Winslow Houndstooth, is after revenge on those who burned down his ranch and stole his livelihood. Each of the characters have their own motivations, from relieving the boredom of retirement to backstabbing and betrayal. The operation – not a caper – involves ridding a stretch of the river of feral hippos in order to open up a free trade route. But in-fighting, betrayals, and the blinkers of a mind set on revenge might be too much for this operation to get off the ground.

‘…I am determined to live. And determination is everything, is it not?’ 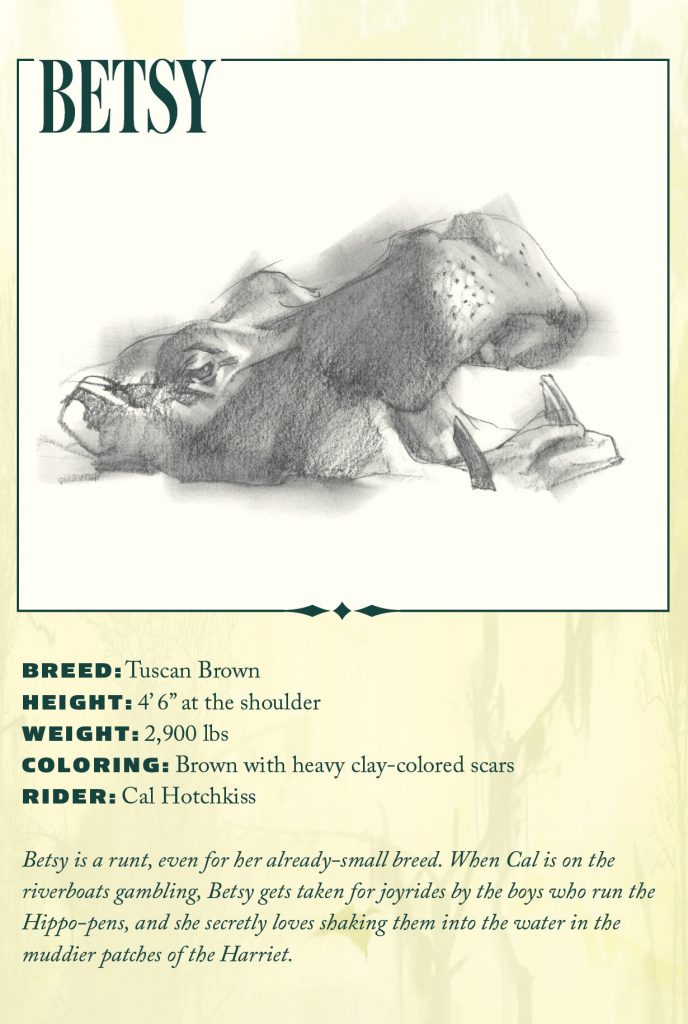 I’ve seen some people decry the levity of the novella, as though Sarah were trying too hard to be fun. I disagree. This is a fun story, it is not meant to be taken too seriously. Though the tone does vary quite dramatically in parts, from having the characters laughing about relationships to a brutal killing of an innocent child in the blink of an eye. But it works in much the same way as it does for Joss Whedon. These scenes feel real. Real life tragedy doesn’t wait for an appropriately ominous time to strike and neither should it in fiction.

At times, the characters do feel a bit like caricatures, but this didn’t bother me too much. To me, it seemed that this was what she was going for, so I accepted it and ran with it. They are all obvious archetypes given the OTT treatment. I mean, why not? It’s a story about hippo cowboys after all, it is hardly going to be a particularly nuanced affair, is it?

‘If he had a first name, nobody seemed to know it. If he had a soul, Houndstooth had certainly never glimpsed it.’ 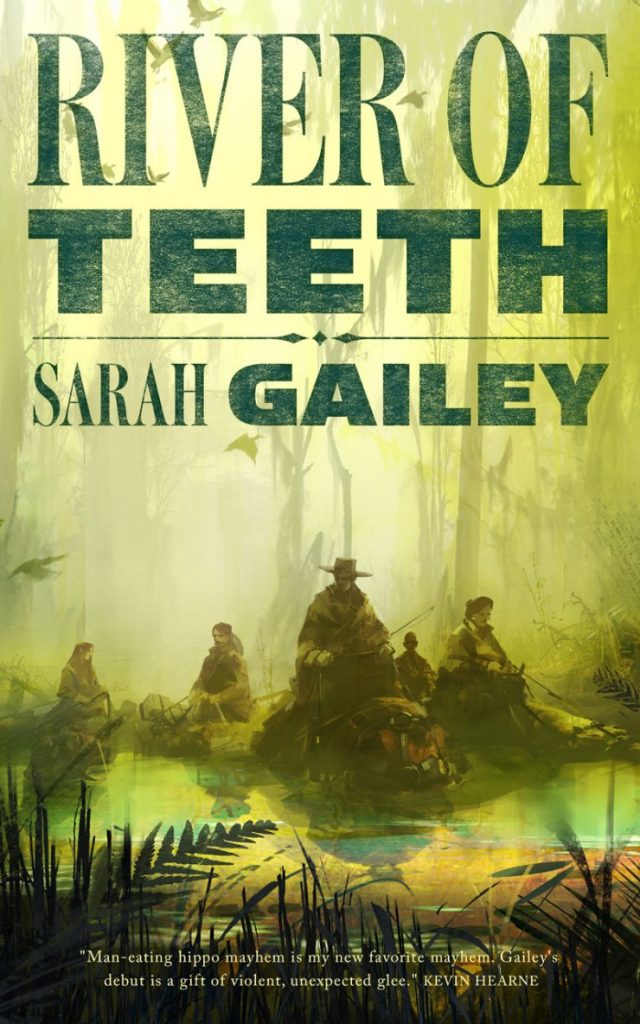 This is, at its core, an entertaining story. It isn’t trying to explore heavy philosophical questions. As Gail Carriger says, there’s nothing wrong with just wanting to entertain your readers and make them laugh. River of Teeth is a very quick and easy read, and while it isn’t aiming for literary greatness, it could use some polish. This is the first longer publication for the author and it shows. Having said that, there are also hints of greatness to come, with some beautiful descriptive prose slipping in every now and then (for example, ‘…his voice as silky as a snake’s belly sliding over a bed of marsh grass.’). While I appreciate the inclusion of non-binary characters, I still struggle with ‘their/they’ as the preferred usage – I find it confusing to read at times and would much prefer it if Spivak became the more popular non-gendered language option.

If I were to have on major complaint it is that the story is far too truncated. Instead of feeling like a story that really suited a novella format, it instead felt like a novel cut off at the end of the first third. While this works to leave the reader wanting more it was also frustrating, leaving me feeling a tad cheated. The story just starts to get going when we’re told it’s all over.

Verdict: Fun debut that embraces the action-adventure spirit. Show’s a lot of promise for things to come, Gailey is an author to watch.

Rivers of Teeth is published by Tor.com. The second novella in the series, Taste of Marrow, will be published in September.

Previous: Wonder Woman: She’s a very good secretary
Next: Star Trek teaches us to embrace our past