Home / Features / Nostalgic Impulse: The Man Who Could Cheat Death (1959) 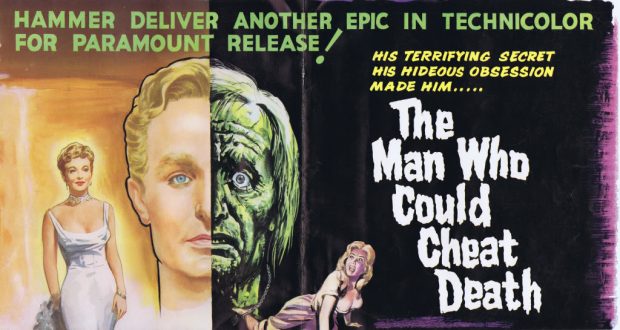 I am woefully underexposed to the cult collection of Hammer Horror films. While at university, I saw my first Hammer film – a restored cinematic re-release of Dracula (1958). Suddenly I understood why these films are so beloved – over the top, silly, and endlessly quotable, there was never any question that these films would become cult classics.

But what about some of the lesser-known titles? A year after the success of Dracula, Hammer Productions began working on another horror film, The Man Who Could Cheat Death, adapted from a play by Barré Lyndon, The Man in Half Moon Street. Hoping to capitalize on the success of arguably their most iconic film, the studio attempted to reunite director Terence Fisher with the films leading actors. However, just days before filming begun, Peter Cushing backed out of the lead role. In stepped Anton Diffring as the crazed scientist clinging to his extended life as the foil for the serious – and very dapper – Christopher Lee.

While The Man Who Could Cheat Death is by no means the most popular or accomplished Hammer Horror title, it is still entertaining all these years later.

‘I can see death staring me in the face.’ 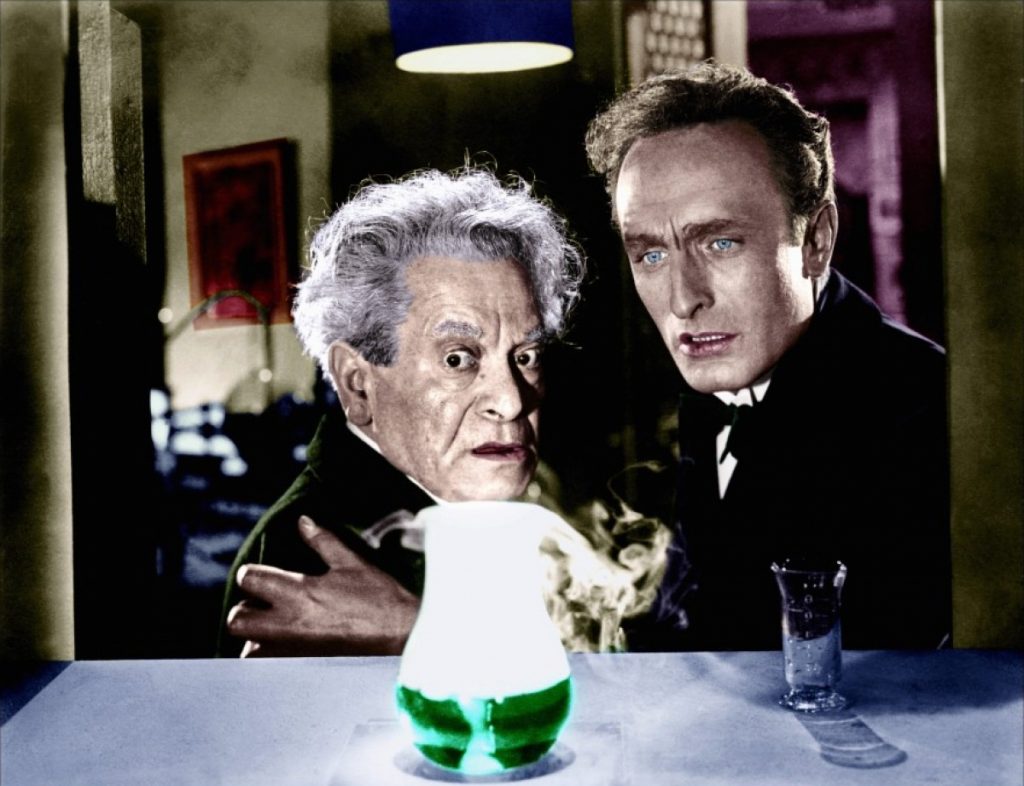 The film follows Dr. Georges Bonnet (Diffring) in his latest attempt to cheat death. Every ten years he undergoes surgery to not only retain his youth, but to have perpetual good health. To do so, he must have a new parathyroid gland implanted – but where does one find a good parathyroid gland just sitting around?

Trouble strikes when Georges’ oldest friend and surgeon, Prof. Ludwig Weiss (Arnold Marlé), is delayed, cutting the procedure very fine. Left physically impaired after a stroke, Weiss entreats Dr. Pierre Gerard (Lee) to perform the surgery. But matters are complicated when yet another of Georges’ models goes missing, Weiss begins to question Georges’ actions. And he’s not the only one.

And the tension doesn’t end there – oh no! – Bonnet and Gerard also find themselves fighting over the same woman, the headstrong Janine Dubois (Hazel Court).

‘What is death that it should be feared so much?’ 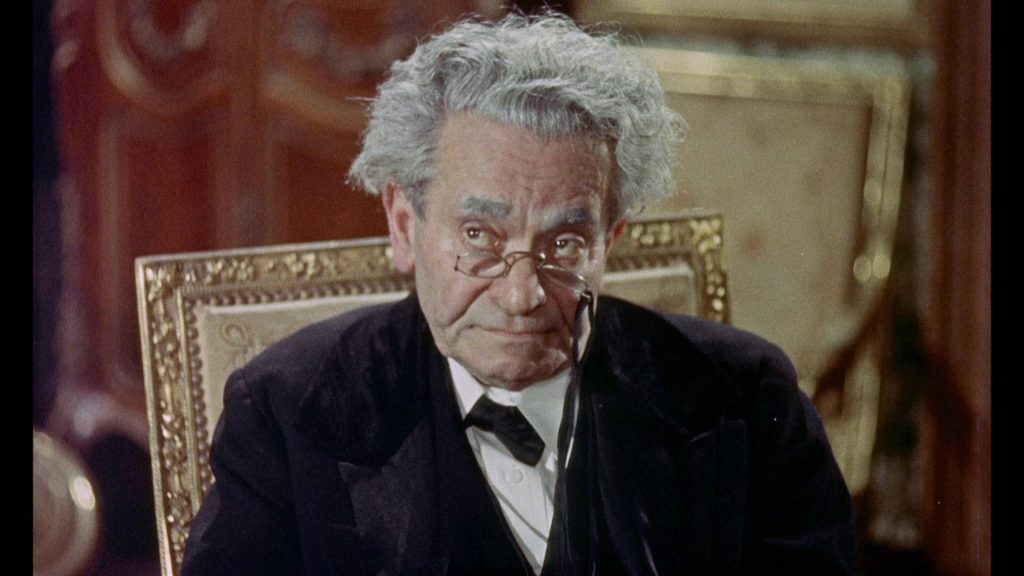 The acting in this film is as over the top and melodramatic as the frothy dialogue. ‘Hammer’ films were great proponents of hammy acting, it seems. In fairness to Lee, he does very well, but he is barely on screen compared to Anton Diffring. Diffring’s approach to looking upset involves squinting his eyes and delivering lines while staring off into the middle distance in the opposite direction to whomever he is speaking. And if that weren’t enough to make us roll our eyes, he also likes to arch his eyebrow in an exaggerated fashion while the filmmakers swell the intense music.

I shouldn’t be too harsh to Diffring, as much of the delivery style is common across all the actors, leading me to think this is a stylistic and directorial choice. There is an awful lot of dramatic dialogue in this film. Almost all of which is said immediately following a sharp head turn. If this film taught me anything, it’s that nothing is dramatic enough without a theatrical head turn. Like all mainstream films of the era, The Man Who Could Cheat Death gives the impression that couples in the 50s thought kissing involved smooshing their faces together and standing there uncomfortably for 20 seconds. Diffring and Hazel Court could not have had any less chemistry. 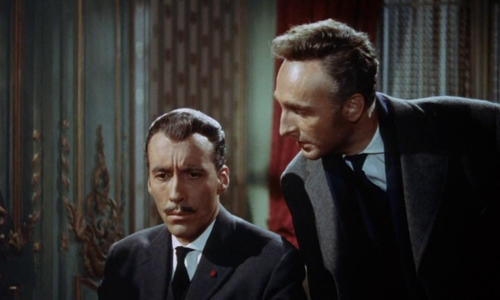 Hammer Productions were incredibly influential on later horror films, something that can be seen squarely on display in The Man Who Could Cheat Death. The director, Fisher, often plays with strange angles and lighting. When the power dynamic between Weiss and Georges plays out intensely, the angles from which the camera views each of them as they speak is from very low for Georges and way up high on Weiss. The film also features some of the earliest ‘point of view’ shots I’ve seen. There are plenty of other horror staples in evidence: the screeching cat in the dark alley, the use of shadows, the dumb blonde who walks straight into danger despite multiple warnings (and danger being unbelievably obvious)… and who could forget that glorious green concoction kept in Georges’ safe that is constantly bubbling. 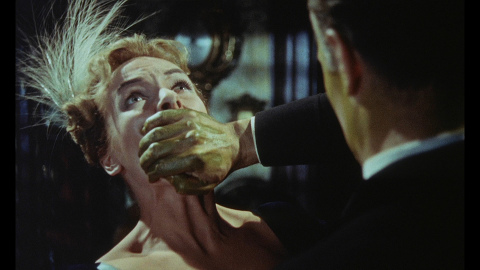 But for all its cliché and trope-establishing work, the film also addresses some interesting philosophical questions that could easily be overlooked amongst the overbearing ‘ham’. The quest for immortality driving scientists to commit appalling acts is nothing knew – and wasn’t then either. Though The Man Who Could Cheat Death takes an interesting approach to a well-trodden subject area. Firstly, it isn’t just eternal youth that they were after, but perpetual health. Which is, sadly, something that is not often touched on in similar stories, despite being an admirable discovery to strive for. The process for immortality explored in the film was developed jointly by Georges and Weiss. Georges offered to be the guinea pig as a supposedly selfless act – he was doing it ‘for humanity’. Where it becomes interesting is the arguments for not sharing the discovery… an imperfect solution to the problem, if everyone had ‘immortality’, how would they get hold of the new glands required to rejuvenate the process every ten years? Why, that would create a cruel and almost cannibalistic world, not to mention an overcrowded one!

This film is great fun. Perhaps laughing throughout was not the intention of the original production crew, but that doesn’t detract from the experience. I’m only sad that Netflix hasn’t given us the European cut featuring a scene with a topless Hazel Court. Who doesn’t love a bit of titillation with their hammy horror?

The Man Who Could Cheat Death is currently streaming on Netflix.

Previous: All Good Things by Emma Newman
Next: The Asylum of Dr. Caligari by James Morrow