Home / Film / Justice League: What did you expect? 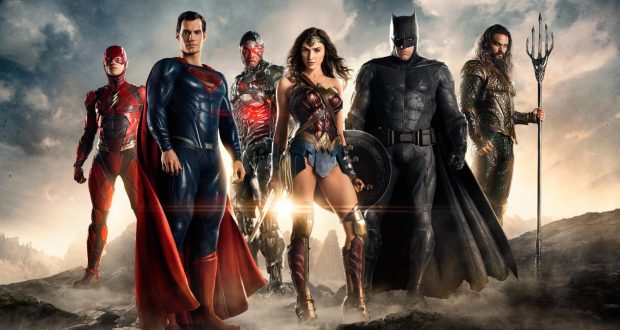 Something was wrong with Superman’s face. I was watching this film and in the first scene something was amiss with Superman’s face. It was almost as if he were on the brink of developing a harelip. Since then, I have learned that Henry Cavill was forced to return for reshoots and had a moustache that he was contractually obliged to keep for another film. His supposedly iconic mug is therefore embellished with a bad CGI upper lip. So terrible is Justice League on a granular level – and it really is terrible – that they can’t even get Superman’s upper lip right.

Do you remember The Avengers? Defining superhero team-up film? Decent action sequences, good setup for having heroes from different backgrounds work together, about the only time Marvel has had a solid villain? You may have thought those would be the elements to copy if you were going to just ape the film FIVE YEARS AFTER THE FACT. But no. No, Warner Brothers decided that they didn’t want satisfying action, a cohesive setup, or an interesting antagonist. They did however decide to roll with an interdimensional alien invasion with a cube-based superweapon. Appropriately, you can hear the bottom of a barrel being scraped in the terrible sound design.

Professionals may not, in fact, have been involved in the making of this film 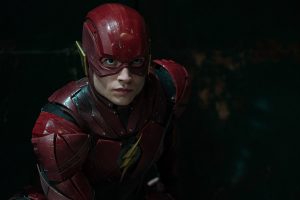 This is objectively a terrible costume. It hurts my eyes.

So the “plot” on its most basic level, involves Batman bringing together a bunch of heroes to stop alien invader Steppenwolf and his Parademon army from acquiring a MacGuffin and destroying the world. To give any more details would involve paragraph upon paragraph of listing poorly-thought-through developments and plot holes. This is an A-to-B plot and yet it is buried in a miasma of over-complicated nonsense. Backstories of irrelevant drivel that are meant to forge absent character arcs with meaningless pay off. Sub-LOTR cosmic fantasy crap to establish the baddies and the ropey foundations for further god-awful films. Speaking as someone who reads a lot of the material this film is based on, they did not do it any favours.

All of this garbage is then delivered through some of the most painfully misjudged visual design I have ever seen. The costumes are vulgar and overdesigned, and yet for all the attention lavished on them to provide a gritty interpretation of the superheroes’ look, they look like bad fancy dress outfits. In a world with some terrific cosplayers, there is simply no excuse. But it does not end there. Wedged into this club sandwich of shit is rushed CGI. Backgrounds appear cartoonish and unreal, physical actors seem to be on a different plane of reality from the greenscreen sets they are standing in. And then, even then, we must contend with Zack Snyder’s by turns gaudy and miserable cinematography. His efforts to make this a gritty and dark outing for a bunch of brightly coloured costumed heroes oozes from every frame at the start: as with Batman vs Superman, the hack seems to think Schindler’s List is an appropriate visual reference. Then we progress into the bright and excessive glow of the Wonder Woman film and ultimately have our sanity blasted as we flip-flop between the maudlin grey and rainbow-spectacular colour schemes that Justice League is trying to simultaneously ship for the whole runtime. 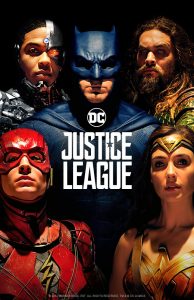 Is this… meant to be a real poster? Really?

This stems from the biggest flaw of the film, and believe me there were many to choose from: tone. I can well imagine that this is the result of the studio backing out of Snyder’s ridiculous grimdark take-me-seriously affection that Batman vs Superman was criticised for, but the result is a film that is all over the place (Lord above, I just complimented BvS for tonal consistency). We vacillate wildly between po-faced determination, apocalyptic angst, energetic fantasy action, ‘quirky’ (read: insufferable) humour, board-room-meeting levels of excitement planning, and even cheesy one-liners. There’s not even an attempt to naturally or logical move between tones. When the MacGuffin is stolen prior to the finale (because the heroes forget about it…) we do not move to tension, despair, or urgency, but a protracted scene about reunion. This to lead into our huge stakes closer?

It doesn’t matter on what scale you analyse this film, Justice League sucks. I don’t know if I hate it as much as Batman vs Superman. Certainly the attempt to reconcile a joyless Zack Snyder film with a chirpy bright Whedon-reshot extravaganza is original… Sort of. But for the fact that all the elements are hackneyed rip-offs and lame imitations of other better material. Elements have been shameless plugged in to soften the tone and make it more like a Marvel film, most obviously the obnoxious quippy Flash who feels like he is in another film. Alongside the irritating drunken-biker version of Aquaman, who they have tried to rescue from ridicule by casting as Jason Momoa, this sums up the insurmountable contradiction of the film. It is a jarring mash-up of irreconcilable tones and story pieces. It does not work.

Verdict: There are probably more of these coming… My God…

Previous: Call Me By Your Name
Next: Mythbusting eBook piracy