I love discovering a fantasy series on my own – one that I come to without the influence of hype or expectations. It is rare these days, but it does happen. For me, this was Hounsom’s Worldmaker Trilogy, which has finally come to a close. The final installment, Firestorm, was published yesterday.

While I love to ‘discover’ a series no one is really talking about, it breaks my heart a little when I fall in love with the series and realise that still very few people are talking about it. Well, I’ve been shouting about Starborn and Hounsom’s stories for years now. Hopefully some of you have had the sense to listen. If not, there’s still time. For the rest of December, Starborn is on sale on Kindle. What’s stopping you? 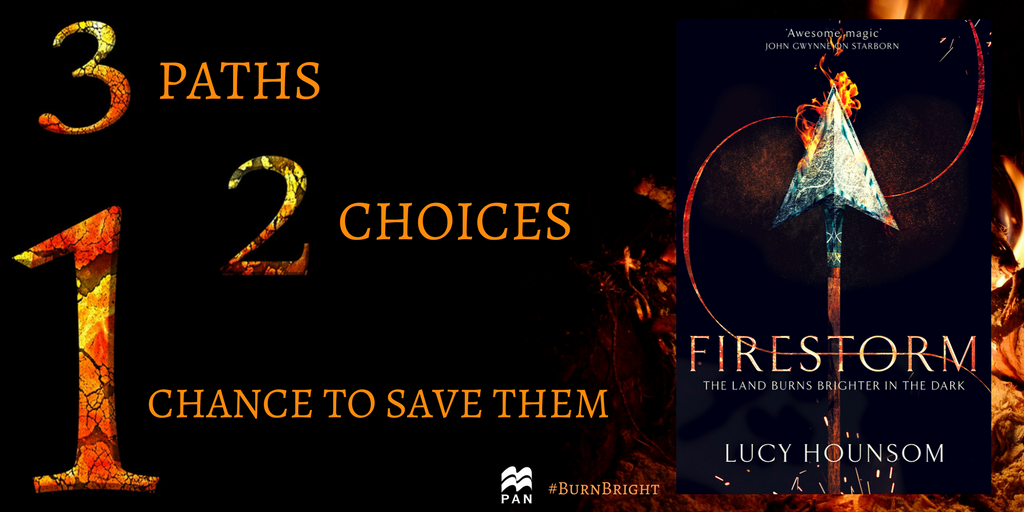 If you’ve been keeping up with the Worldmaker Trilogy, you might be wondering what on Earth Hounsom has in store for you now? In the first novel, Kyndra both broke and remade the world, and in the second, we encountered insane time travellers. The series is the absolute best kind of batshit crazy. But… where to next?

‘They were both changed and there was no going back.’

The budding rebellion has a long way to go. Their numbers are limited, positively insignificant compared to Sartya’s mighty Fist. While Kyndra’s attention is occupied with the Khronostian eldest’s mad plans to change hundreds of years of history, General Hagdon looks to increasing the strength of the rebellion in order to protect Rairam from Iresonté’s encroaching forces. Kul’Gareth is yet to reunite the terrifying gauntlets… and when he does, will it save him or destroy them all?

Needless to say, there’s a lot going on. As with the previous two installments, Firestorm is a rollicking ride. I found myself churning through it at an incredible speed. There’s so much going on, so many plot threads, that it is a miracle Hounsom manages to keep them spinning and never lets any of them slip too far out of sight. It’s a solid and thoroughly enjoyable conclusion to a great debut series.

‘The Starborn do not choose their allies lightly.’

That’s not to say it isn’t without its flaws (come on, it’s me…). The first third of the novel is hampered by retreading events of the previous two novels. I understand that publishers often put pressure on their authors to include recaps and so on in their next novels. But really, these are fantasy readers we’re talking about. We aren’t lazy readers. We thrive on knowing these worlds inside out. There’s no need for these repetitious passages, they only serve to slow things down.

I admit that I was a little worried as Part One came to a close. But what seemed like a let-down of a culmination to a major story arc was just a bluff. Hounsom was playing with me. What I worried would be a disappointment just reminded me of how the author likes to play with and surprise the reader. While the trajectory of the novel’s plot is obvious, how the characters reach the end is always an interesting, and surprising journey.

Verdict: A solid conclusion to Hounsom’s trilogy. Not quite as astonishingly brilliant as Starborn but certainly an accomplished and entertaining final installment to a truly epic fantasy series.

The Bands of Mourning: If ever someone should have taken a hint, it was you
Book epic fantasy Fantasy Firestorm Heartland Lucy Hounsom magic Review Starborn trilogy Worldmaker trilogy 2017-12-15
Megan Leigh

Previous: A Cult of Deception: Romance in Hollywood
Next: Star Wars: The Last Jedi