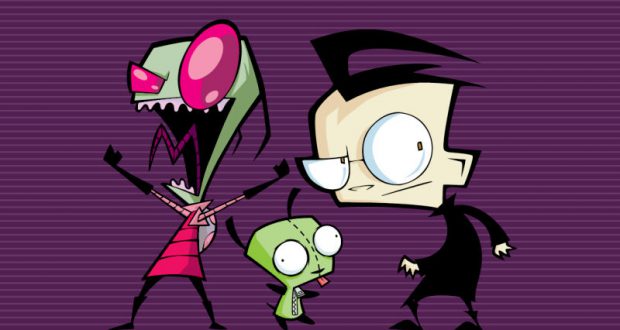 In 1999, comic book writer Jhonen Vasquez pitched his idea for a cartoon to Nickelodeon. That wacky little idea became Invader Zim, a series that began airing in 2001. The network had no idea what a gem Vasquez had produced for them, cancelling the series shortly into the second season. Despite the series being a critical darling, Nickelodeon’s viewers didn’t click with the show. Since it has been off the air, however, the show has remained in the public consciousness, firmly establishing itself as a cult classic.

‘You dare agree with me? Prepare to meet your horrible doom!’ 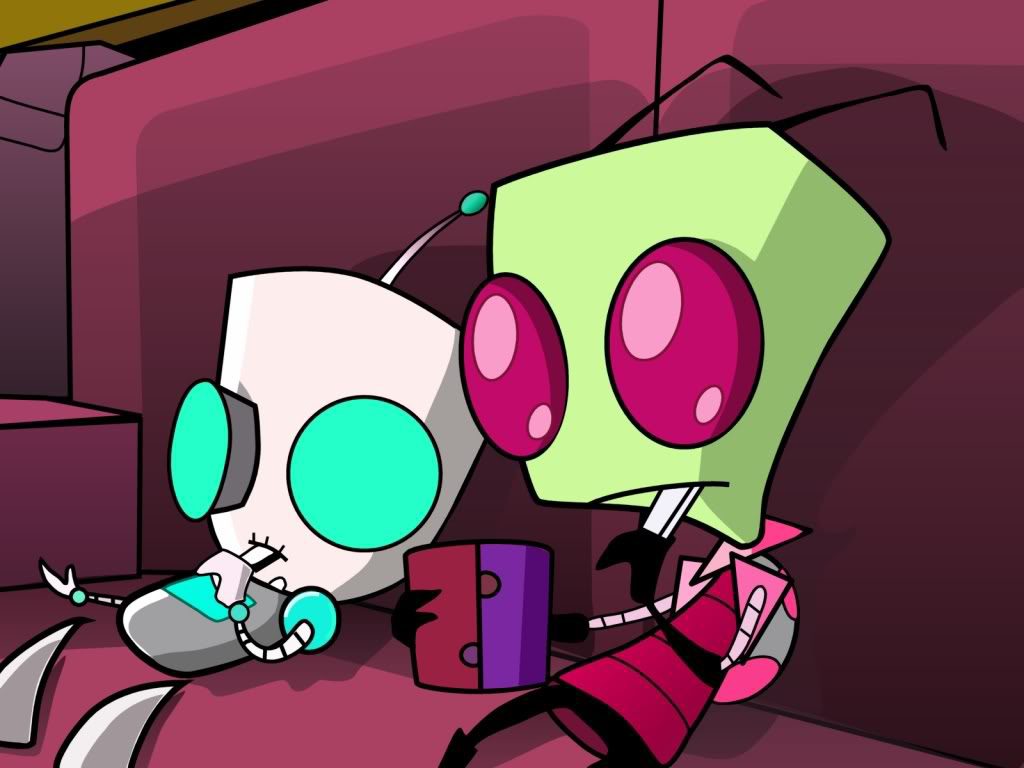 It’s not hard to see why the show struck a chord and has continued to find an audience. This show is all about outsiders, in all walks of life. An alien on Earth who doesn’t fit in with his own people let alone the filthy humans he must blend in with, a young boy obsessed with the supernatural, his sister who would happily avoid all human contact, a robot assistant made of junk parts, leaders of an alien race determined entirely by height… Even those of us who have managed to walk through life being popular and adored will have, at one time or another, felt left out. Being an outsider of some kind is a universal experience – for both children and adults – and as a concept, will never date.

Invader Zim not only appeals to adults as well as children, but is quality TV outside of the intended audience (children) and medium (animation). If you haven’t seen the series before, I highly recommend you get hold of a copy. You will find you are unable to stop watching and discover numerous amusing one-liners that you never knew you were missing in your life.

‘Prepare your bladder for imminent release!’ 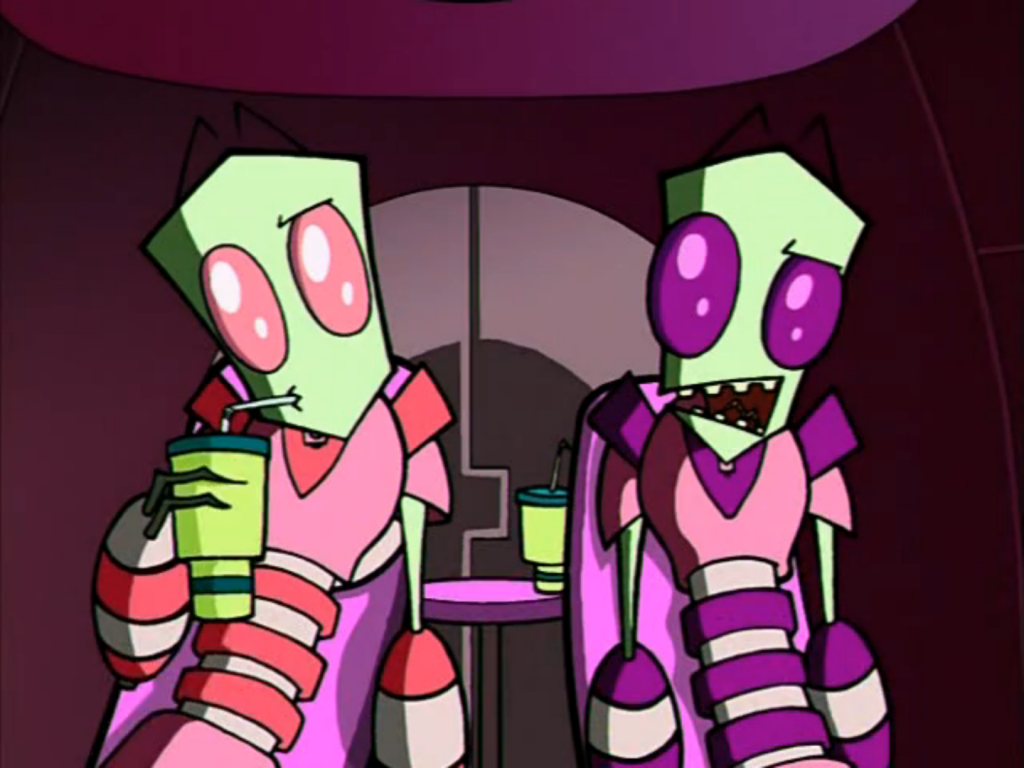 I’m not sure how Vasquez pitched Invader Zim to a bunch of executives – granted, children’s TV – the premise is both completely batty and utterly genius. The title character of the series is part of an alien race that expands by invading other planets/civilisations. They’ve tried exiling him and forcing him to do manual labour, but the ‘Tallest’ (yes, his race elevates their leaders based on their height… because, well, why not?!) have been unable to adequately rid themselves of Zim. More hindrance than help, Zim is motivated and well meaning (from his society’s perspective, not so much the poor Earth vermin he hopes to conquer). The Tallest give in to Zim’s demands for an assignment and send him to the very out-of-the-way and insignificant planet, Earth.

This premise is already ripe for stories, but Vasquez doesn’t stop there with developing a rich situation for the narrative. When Zim lands on Earth, he realizes that he needs to blend in with the humans while also learning as much as he possibly can about them – and where better to learn than school?! The inept, impetuous invading alien is thrown into the world of primary school.

‘Oh, I know all kinds of things about you. Pretty creepy, huh?’

Zim is my idol, my fear, and my life. Perhaps you think it is strange for an adult to relate so well to a children’s cartoon about a hapless alien determined to conquer Earth, but such thoughts simply go to show that you have not watched the genius that is Invader Zim. While being thoroughly entertained, the series managed to create characters that are so bizarrely ‘out there’ that they are utterly believable. I saw myself and all my friends in these fictional characters, reminding me of everything there is to love about the people in my life (yes, soppy, I know). 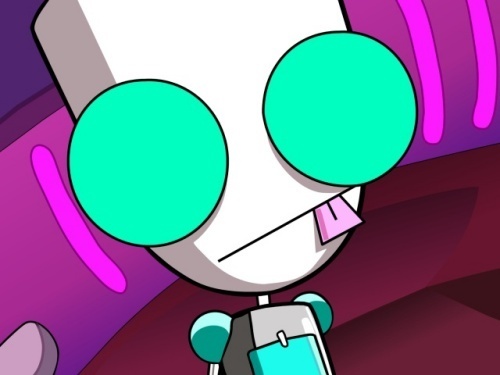 The foil for the titular character is two-fold. First is Gir, Zim’s malfunctioning, adorable robot. Gir is excitable and friendly, often throwing spanners in Zim’s plans without meaning to; for instance, taking out his GPS chip to make room for a cupcake – because cupcake, duh. While Gir wants to be helpful, he also can’t seem to get the hang of this ‘destruction’ thing. He’s far too busy making friends to be any good as a soldier of invasion (which, incidentally, Zim isn’t good at either).

Dib is Zim’s schoolmate foil, similar inept in his own ways and the focus of much of Zim’s ire. A self-appointed ‘paranormal investigator’, Dib is the butt of most school jokes. No one believes his crazy ideas, even the ones that are true – that Zim is an alien, there to collect data on humanity in order to conquer the Earth. Zim, Gir, and Dib all have two things in common: they are looking for validation and respect (Zim with the tallest, Gir with Zim, and Dib with his father and, well, everyone else) and struggling to overcome their inadequacies. They are each relatable, endearing, and infuriating. What’s not to love?

‘Lemony fresh victory shall be mine!’

More than fifteen years later, whether you are returning to this series as a previous fan or coming to it fresh, you’ll find it has lost none of its appeal. The series is endlessly quotable and continues to feel ‘lemony fresh’ and inventive.

Previous: Santa Clarita Diet: I know we have to kill somebody today, but we have to be parents every day.
Next: The LEGO Batman Movie: All important movies start with a dark screen