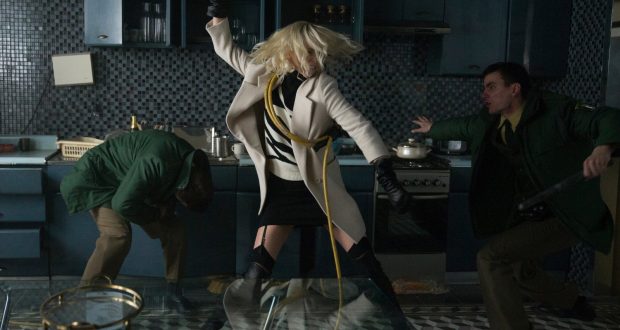 Lorraine Broughton (Charlize Theron) is headed to Berlin, a hornet’s’ nest of intrigue, just as the Wall comes down in 1989. She has been sent by her MI6 taskmasters to recover that most easily misplaced of national secrets in the movies, a list of active operatives. She has to navigate an arena of international spies from the major powers, all circling as the Iron Curtain falls and all after that list. Not least of her rivals is the British station chief in Berlin, wild man David Percival (James McAvoy), who is nominally supposed to help her.

Atomic Blonde follows in the wake of several films that have sold themselves on their poppy soundtracks. Here we get the classics of 80s rock and pop, overlaid on the vibrant neon of the countercultural German clubbing scene. It is a touch disappointing that we only get 99 Red Balloons as the sole entry of iconic German pop music but the soundtrack as it is does prove effective and evocative of the era.

A strong period soundtrack but one that lacks any surprises 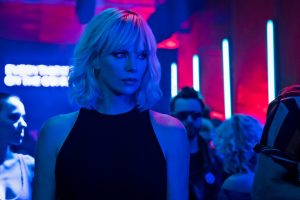 In all things, Atomic Blonde is aiming to inject a sleek and icey late 80s aesthetic. Garish clashing colours from graffiti and neon lights are injected wantonly into the visuals. Much effort has been taken to cultivate the right feel to the wardrobe to further embellish the period. We’re taken on a grand tour of Berlin during some of the most televised footage of a popular revolution, which will no doubt induce recall for some. Above all though, the action is edited with such a precise hand. Theron (and a squad of stunt doubles, one does not doubt) have to perform some remarkably impressive and fast-paced action sequences and not once does the direction opt for the lazy use of shaky cam and choppy editing to cover up for inadequacies of the production. Much like John Wick, this is all in the sharp choreography.

The weakest element is easily the plot. Functionally, it is a MacGuffin hunt and this serves its purpose in providing a framework for the action sequences. There’s certainly nothing problematic and, beyond a predictable propensity for a series of twists in the final act (this is a spy thriller, after all), does not have pretensions to being particularly deep or complex. This is not Tinker, Tailor, Soldier, Spy. It has far more in common with the silly and sexy spy antics of James Bond than a hard-boiled Cold War thriller. 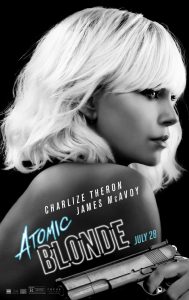 In fact, Atomic Blonde puts paid to the idea that we couldn’t have a female Bond. Theron’s Lorraine spends the film looking like an immaculate fashion model, every bit the stylish fantasy figure as Bond in his tuxedo. She’s a capable and vigorous seductress on top of that. And above all, she is a bloody and inventive combatant. The action sequences have a great deal more Bourne than Bond in their DNA in their sheer brutality. Theron’s poised beauty could be seen as simple eye candy where it not for the fact that the film sees her accumulative a withering amount of damage. It’s a point of contrast between Lorraine as a hyper-stylish femme fatale and as a canvas for lacerations and blunt force trauma by the end.

There are no highly sophisticated pleasures to be found here. Atomic Blonde depicts a world in which unreasonably attractive spies seduce each other between pulping DDR police and KGB hitmen, all to the tune of David Bowie or New Order. The action sequences are executed with a startling mastery with particular attention to viscera, and the filmmakers clearly had fun recreating the setting. Nothing wrong with that at all.

Verdict: A sleek and stylist, if a touch unapologetically shallow, spy thriller.

Previous: The art of the trailer: A marketing soundtrack
Next: Age of Assassins by RJ Barker