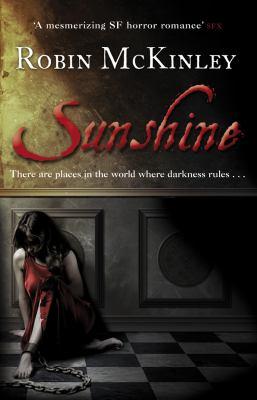 One of my favourite books of all time, that book that I reread every year whenever I need a pick me up, is Robin McKinley’s Newberry Award winning The Hero and the Crown. If you haven’t read it, and get along with children’s literature, read it – read it now!

If I had seen Sunshine in a book store and actually bothered to read the blurb (as the cover already shouts at me as something I would hate), I’m sure I would have put it straight back on the shelf it came from. However, it was written by one of my favourite authors, so I thought, ‘Why not?’ The blurb – and the endorsements from people like Neil Gaiman and Charlaine Harris – make the book sound like standard vampire horror-romance fare. The kind of thing that is all the rage at the moment (die, die Stephanie Meyer, learn to write!), and makes the Buffy lover in me want to cry out in despair.

And in some ways they are right. The heroine, the titular Sunshine, is a sun-loving magic-handler. Everything about her craves heat and the sun. She is a baker – and fair warning, all you will want to do is eat baked goods while reading this, I was even driven to making my own cinnamon rolls (this recipe worked well if you want to try it yourself: http://allrecipes.com/recipe/ninety-minute-cinnamon-rolls/). We immediately have the set up of light-loving, ‘good’ human against the night-dwelling, ‘evil’ vampire. Standard.

The set-up is fairly standard as well. Female human is kidnapped and chained up with a vampire – she is to be his meal – but in true ‘broody, good vampire’ fashion, he doesn’t eat her. The blurb, however, only covers this part of the story, and with all the hints at romance, readers can make their own assumptions about the arc of the story. But their guesses, I would imagine, would turn out to be wrong.

The romance, while hinted at, is not central to the book (I don’t think). Instead, she creates an action-packed horror-thriller, with a detailed world full of magical creatures and fun characters. While not making the world too far removed from our own, she introduces enough to make it distinct: the Voodoo Wars, the acceptance of demons, vampires, and were-creatures, and a government bureaucracy to deal with them. The technology is familiar as well, with some minor adjustments: combox (computer), cosmail (email), globenet (internet).

Where the book falls down is in the few places McKinley does try to bring in the horror-romance, or horror-erotica. It is possible that I hold McKinley too firmly in my childhood to allow her to write such things, as I don’t usually have an issue with the word ‘cunt’ (I use it far too regularly to have an issue with it), but when she used it in the novel (only once), I cringed. It was completely out of place and didn’t match the tone of the rest of the book. Occasionally some of her sentences felt clunky, overdone, or clichéd, but I have the same complaint with F. Scott Fitzgerald (another of my favourite authors), so there are worse criticisms I could lay on McKinley.

The book is incredibly easy to read and moves at a great pace. You want to keep reading, even after the book ends – it seems perfect fodder for a series. I would definitely recommend Sunshine to readers who enjoy supernatural themes but want to steer clear of the teenage drivel doing the rounds at the moment.

Verdict: Thoroughly enjoyable, but don’t approach this one unless you are open to vampire stories.

Previous: The Guild: Graphic Novels, volumes 1 and 2
Next: Cabin in the Woods