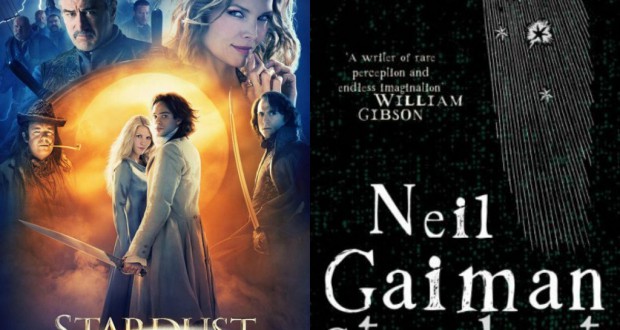 In 2007, long before I had read any Neil Gaiman, my university flat mate dragged me along to see a film called Stardust. She had nothing but praise for the novel and couldn’t wait to see the film. I remember being underwhelmed by the film, finding the casting of big names for silly roles a little trite and it never quite came together for me. 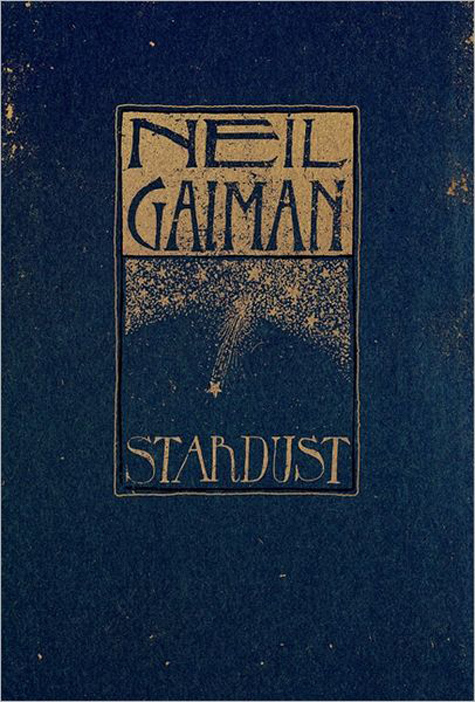 More than seven years on, I am now a fan of much of Neil Gaiman’s work (though not all of it, I think American Gods is horrendously overrated and don’t particularly like it when he is trying too hard to be funny). When Amazon randomly sent me a link to a free download of a selection of books in the post-Christmas period, I was surprised to find a title I was actually interested in reading (honestly, I’m so sick of Kindle daily deals and sales having the same shitty books on offer that I never, ever want to read). I ‘bought’ Neil Gaiman’s Stardust for £0.00. Bargain!

Like most of his work, the prose is incredibly easy to read and I found myself lapping it up, finishing the novel in just two days. Once I read the novel, I found I wanted to go back and revisit Matthew Vaughn’s screen adaptation. And here are a few thoughts on both…

Tristran Thorn (Tristan in the film) was born as the result of his father having a spur of the moment dalliance with a faerie woman while visiting the fantastical market beyond the wall. When Tristran is on the cusp of manhood, he finds himself desperately trying to win the affections of the most beautiful girl in the village, Victoria Forester. He promises her anything in return for his heart’s desire. As they talk, they see a star fall beyond the wall. Victoria, playfully, says that if he returns with the fallen star she will give him what he wants. 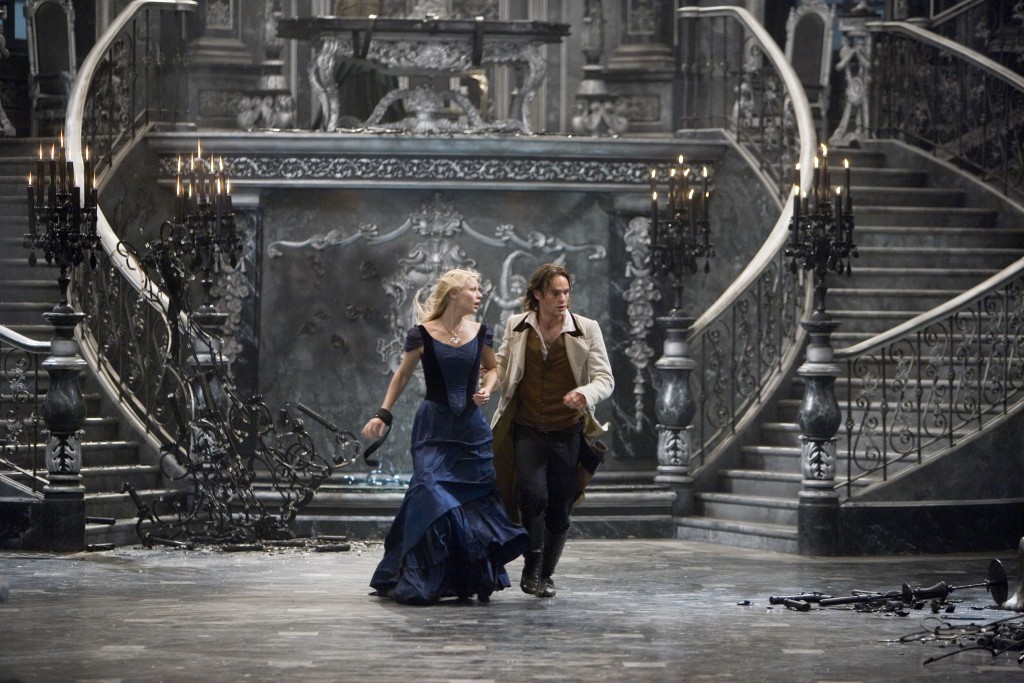 Unaware of his fae origins, Tristran heads out into the unknown with singular purpose. Along the way he encounters many strange creatures and has the kinds of adventures the straight-laced village boy he once was would never even have dreamed of. When he does find the star, it is not a hard lump of rock as he had assumed it would be, but a foul-tempered young woman with a broken leg.

Yvaine, the star in question, is chained against her will and taken as Tristran’s prize and prisoner. Before they can get back to the village of Wall, however, they must outrun the power-hungry heirs to the Stormhold throne and the powerful witches who want to cut out Yvaine’s heart and use it for the everlasting youth it can provide. 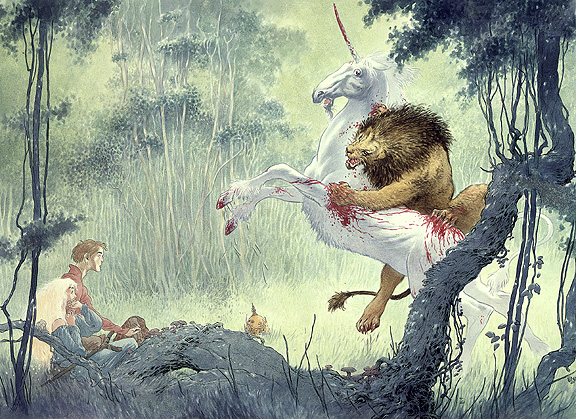 Calling Stardust a novel is sort of misleading. First of all, it is really quite short, barely more than a novella. Secondly, it was originally published as a four-part comic book mini series with illustrations by Charles Vess. A year later the illustrations were removed and it was published as a novel. Finally, it is written very much in a style emulating fairy tales, while trying to inject a touch of Douglas Adams’ style humour into the telling.

Part of the fairy tale style in the telling of the story comes into play with the condensing of time. The first chapter sets up the entirety of the story, happening 17 years before the rest of the novel. However, during the ‘action sequences’ of the novel, time is sped up and slowed down in an almost random way. The speeding up of it makes sure the narrative focuses only on parts of the story that are relevant, but it does, at times, take away from the character development for the reader as well as valuable time that could have been devoted to crafting a more three dimensional relationship between Tristran and Yvaine. 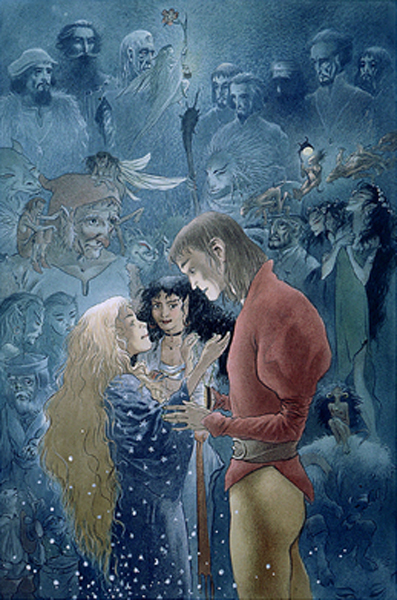 What is particularly unique, refreshingly so, about Stardust compared to many modern stories dealing with the fae is the lack of awe the characters have in the face of extraordinary events. It is the world they are in and that’s that. There’s not too much description or explanation given to the creatures, magic, or general happenings. Things are as they are and that’s that.

The novel is fast and easy to read, and on the whole enjoyable. Unfortunately, the stylistic choices often end up in caricatures rather than fleshed out characters. This might have worked more in the context of a picture book, but as a novel it doesn’t deliver. When Gaiman is really trying to be amusing or ‘edgy’ he instead comes off as an out of touch English dork doing a whole lot of trying and not a lot of succeeding. By the time you get to the end of the ‘novel’, you are left wanting a whole lot more. Yes, I enjoyed reading it, but it was disappointing in that it could have been much better. 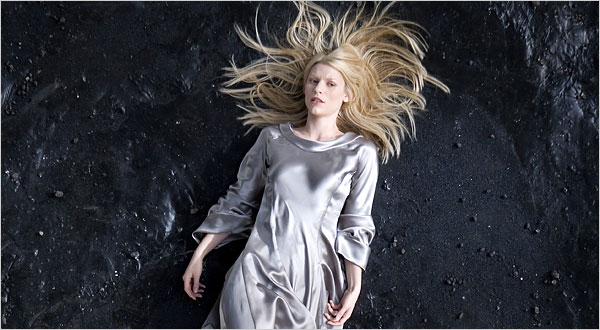 Like many adaptations, the film changes quite a bit of the story. It doesn’t have the issue that is often the case, where there is far too much crammed into the book to possibly convey in a conventional length feature film. Instead, the film opts to take the easier way out with some of the more strange and dark aspects of the original story, and at other times tries to add colour and excitement for bit roles with big name actors.

For instance, instead of Victoria Forester actually having her own depth – falling in love with someone else – she is presented, in the film, as simply a shallow, attractive girl. The inclusion of Henry Cavill as a foppish suitor in competition with Tristran does nothing for the story other than make it more predictable. Without the complication of Dunstan marrying Daisy, Tristran having a half sister and the mother he assumed was his biological mother all his life turns out not to be (despite the rest of the village knowing the truth), also makes Tristran a less interesting character. 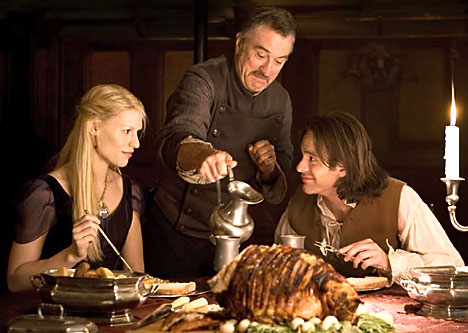 I suppose they felt that audiences wouldn’t be able to get behind the idea of a loving husband with the man who ran off with a fae slave girl during the courtship of his future wife, or of a wife who would accept a son as her own and continue to love her husband. I’m not sure why they made the captain of the lightning ship a gay cross-dresser other than to give De Niro something more interesting to do and the way they gloss over the ideas of power and slavery inherent in the tale is downright depressing. And this from the same envelope-pushing director that gave us Kick-Ass a few years later.

Charlie Cox as the film’s Tristan and Claire Danes as Yvaine save the film from what is otherwise childish, shallow stupidity. Every moment that it has where it could potentially have something interesting to say about fairy tales or the moral issues at play within the story it prefers showy appearances from well-known actors or tired fantasy clichés.

While Stardust as a piece of writing is definitely worth your while when read alongside Charlie Vess’s beautiful illustrations, it loses some of it’s charm read as a novel. The film is disappointingly lacking in depth, though can be fun if you want something fluffy and predictable. This is one adaptation that does not live up to the source material and definitely not one of Matthew Vaughn’s best films.

Previous: Outlander: Not only was I a bigamist and an adulteress but I had enjoyed it.
Next: Binge watching: Hemlock Grove