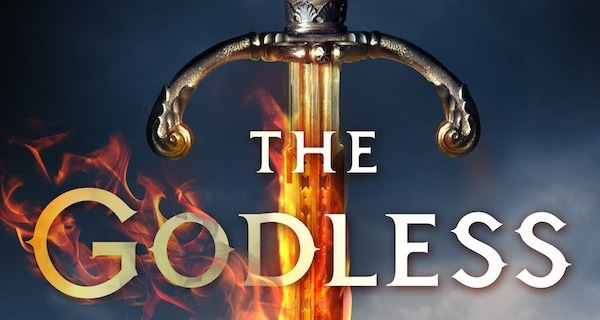 The Gods are dying. Fifteen thousand years after the end of their war, their bodies can still be found across the world. They kneel in forests, lie beneath mountains, and rest at the bottom of the world’s ocean. For thousands of years, men and women have awoken with strange powers that are derived from their bodies.

The city Mireea is built against a huge stone wall that stretches across a vast mountain range, following the massive fallen body of the god, Ger. Ayae, a young cartographer’s apprentice, is attacked and discovers she cannot be harmed by fire. Her new power makes her a target for an army that is marching on Mireea. With the help of Zaifyr, a strange man adorned with charms, she is taught the awful history of ‘cursed’ men and women, coming to grips with her new powers and the enemies they make. Meanwhile, the saboteur Bueralan infiltrates the army that is approaching her home to learn its terrible secret. 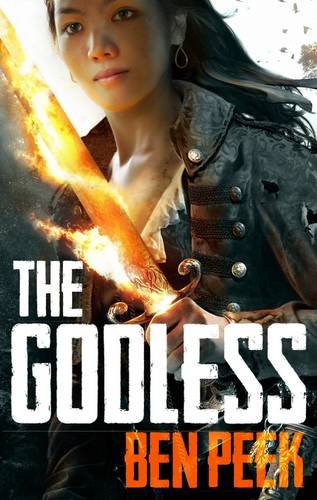 I should know better than to judge a book by its cover but I am apparently a slow learner. The first cover I saw for Ben Peek’s The Godless had me expecting a rather straightforward YA fantasy novel. That was partly my fault, making a snap judgment, but also goes to show just how important cover design is. Whoever made the call on that particular cover needs a good thrashing – it misrepresents the novel. Then there is also the name of the series The Godless, which begins the Children Trilogy. The name makes sense once you read the book, but again it implies a more YA bent than the novel contains.

The Godless was entirely unexpected – in content, writing style, and its flouting of genre conventions. Peek creates an extremely rich and complex world to set his narrative, one that has far more depths than are ever revealed in the first novel of the series. It bodes well for the trilogy, with clearly enough content to delve into in future installments. However, while the novel is interesting in its structure (semi non-linear), it is often confusing, jumping in and out of flashbacks as well as different times and characters without warning. As a reader, I constantly felt like I was trying to catch up – ‘Where am I now?’ ‘What’s going on?’ ‘Are we in the past, the future, the present?’ ‘Whose point of view are we in now?’ This confusion could often have been avoided by simply adding a line break before the shift in narrative focus.

The novel also suffers somewhat from the sheer scope it covers – from the perspective of the rich world as well as the number of protagonists we’re given. I felt that it needed more breathing space. While this kind of epic storytelling has been done so well by Sanderson in his Stormlight Archive, his novels are more than twice the size of The Godless. The characters get lost amongst the wow factor of the world they inhabit, with not enough time given to exploring who they are when they aren’t simply reacting to crisis after crisis. 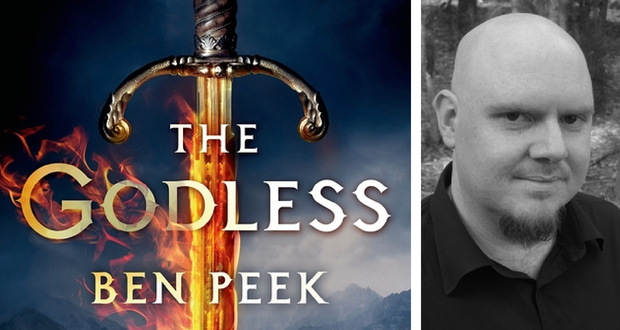 This is particularly the case with Ayae. Given the novel follows her narrative the most, she is our central protagonist – but from beginning to end I felt she didn’t have a particularly strong character. She is almost entirely reactionary and any moments of agency she has are terrible ideas where she acts before thinking (if she bothers to think at all). She wallows in what she perceives as lost, which grows ever more tiresome as the novel continues. What she wants is only to have things be normal – to have her home back – but it isn’t a particularly interesting goal for the reader to follow.

Despite its flaws, The Godless gets its hooks in quick and deep. You can’t help but keep reading. While there are so many questions, more and more as you go on, many of which are left unanswered, the pace and complexity of the narrative rushes you towards the end. There are nods to many epic fantasy writers while avoiding falling into too many conventional, cliché story arcs. The number of strong women – from the head of their community, to Mireea’s healer, the head of a band of mercenaries, to the ‘big bad’ – are a welcome addition to a genre that is filled with powerful men. The richness of the world also takes up any slack in the characterization, ensuring that there is always something present to hold the reader’s attention.

Verdict: Thoroughly immersive fantasy world with fast paced action and epic scope let down by often confusing p.o.v. and time shifts, as well as a lack of characterization. But the world is so captivating the novel’s faults are worth putting up with.

You can read the first five chapters of The Godless on Tor.com. The second novel in the Children Trilogy, Leviathan’s Blood, is due out in April 2016.

Previous: Gender representation in Heinlein’s The Moon is a Harsh Mistress
Next: Made to Kill by Adam Christopher