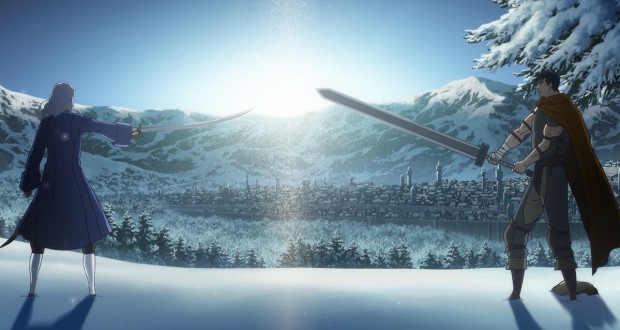 In this world, is the destiny of mankind controlled by some transcendental entity or law? Is it like the hand of god hovering above? At least it is true… that man has no control even over his own will.

And so opens the dark and miserable world of Berserk.

Born from the corpse of a hanged woman, the unwanted whelp Guts is raised begrudgingly in a mercenary company. A traumatic and violent childhood produces a surly and angry young man unwilling to connect with others, drifting around using his sword-for-hire skills as a meagre form of subsistence living. After a fateful battle, he falls under the influence of the charismatic upstart commander Griffith: leader of the Band of the Hawk. Forming a bizarre relationship with this slight but formidable leader, and a bitter rivalry with Griffith’s lieutenant Casca, Guts finds new meaning to his life in a kingdom torn apart by war. The fraught and twisted path the three warriors will travel is beyond any of their reckoning… 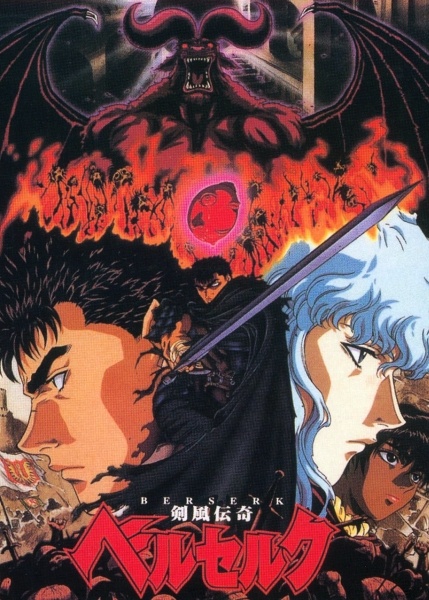 In recent weeks, we have had the exciting announcement (for me) that this notorious manga by Kentaro Miura will be receiving another anime adaptation. The franchise has a turbulent history with adaptation. Both previous attempts have gone unfinished. And it is no easy task to tackle the grizzly monstrosity. The manga currently stands at 37 tankobon (collected manga volumes) and is still ongoing. A new attempt must either curtail the beast with an anime-specific ending like Fullmetal Alchemist (2003), expects the manga to finish whilst episodes are made, or do as Inuyasha did and pad things out with filler to an absurd degree and then temporarily halt the series when that becomes unsustainable. Nonetheless, a new version we are being offered and a new version I will in due course devour (however long it lasts). But why has this franchise proven so hard to keep aloft in the first place? And why is it frequently returned to? Time for a history lesson…

Let’s first travel back in the anime annals to the long forgotten time of 1997 when the first 25 episode series emerged into the daylight. One of the key selling points of many properties in the anime boom of the mid-90s was that they offered a more mature range of subject matter than Western animation, and Berserk certainly fit the bill. It had innate appeal to the geeky potential audience, being a broadly pseudo-European fantasy series with knights and castle sieges – offering less of a cultural barrier than more overtly Japanese fantasy pieces. It was also intensely gory, explicit, and concerned with the harrowing psychological trauma that its characters go through. By no means alone in being a violent and graphic anime, this was uncommon in this specific genre. Competitors like The Vision of Escaflowne and Record of the Lodoss War were much more child-friendly. Berserk was ‘seinen’, anime and manga designed specifically for an older (male) audience than the more adolescent and childish ‘shonen’ (boys) and ‘shojo’ (girls).* 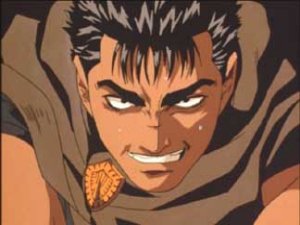 It is always interesting to see what elements of media date as time rolls on. Much of the 90s wave now looks odd with its jaunty drawing styles and renowned poor dubbing – for those who deign to listen to dubs! The unwillingness of newer anime audiences to tolerate these features has seen lots of shows be relegated to the figurative archives. Plenty of quality standards have improved, the industry has grown in size since, and the channels for non-Japanese audiences to access anime have diversified and expanded too. The result is that many series have been culled from popular consciousness and we are left with a handful of classics worth hunting down in spite of their aged features. What about this particular series made it stick around?

It certainly wasn’t the animation. Although well-drawn, the production was so underfunded that cheap efforts to curtail the actual movement of images are abundant in the series. Some scenes brazenly use stills. Occasionally characters move simply by bobbing cells up and down. There is plenty of reverse-and-repeat in the action scenes. This is the main reason the series ends on the mother of all cliff-hangers: there was no more money to produce episodes. That tantalising allusion to a resolution that came at the series end; the promise of the opening that launched us into the flashback that is season 1 (yes, the entire run is simply the flashback material that precedes the main action of the manga) were never delivered upon in that sense. You want closure? Look elsewhere. 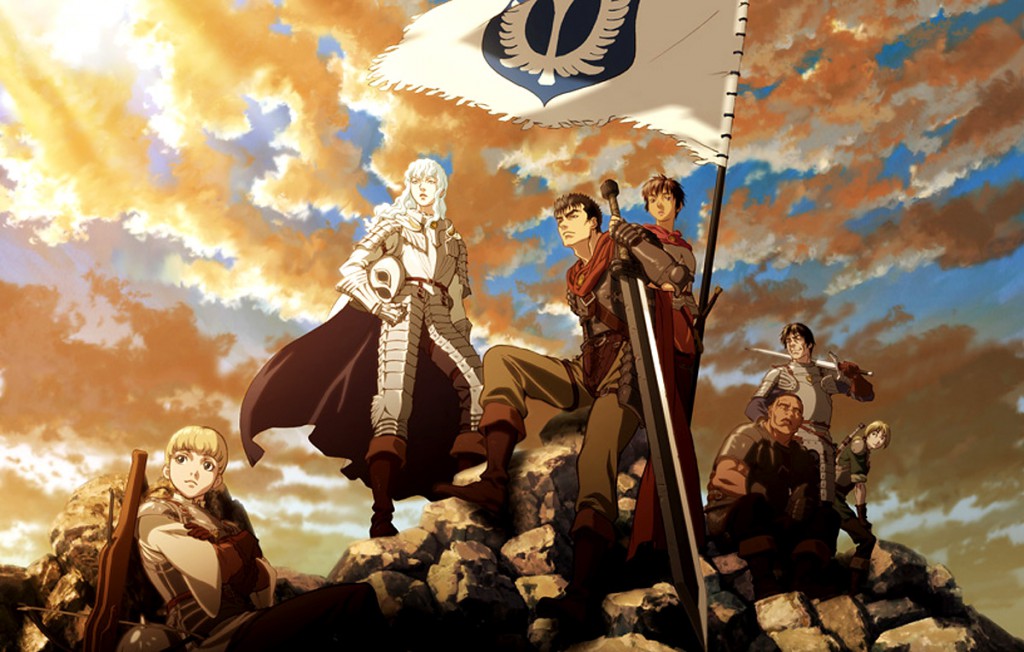 No, what kept Berserk on the radar was simply its quality of story-telling. Whereas other bolshie seinen like Fist of the North Star were content to spew violent action over heavy metal riffs, the bloody world of Berserk had the contemplative and eerie compositions of Susumu Hirasawa. On top of violent combat, it has politics, intrigue, jealousy, lust, unrequited love, ambition, and redemption. There’s a subtlety to the characters missing in a lot of drama where motivations and decisions are meant to be explicit. So much of the drama stems from the dense psychology at work: no matter how removed the characters became from a realistic world, as they were exposed to the otherworldly figures like Zodd the Immortal, they were always grounded in a believable response to their surroundings. Berserk is so often sold as an anime of gratuity and violence but if you strip that away, you still have a compelling interpersonal drama.

Following the end of the series, nothing was heard for years. Well, not quite true. The manga obviously continued and the tale of Guts, Casca and Griffith spiralled out in its pages. Then in 2012, there was a something new on the horizon. Not a series of episodes but a series of films, the first three recapping The Golden Age Arc (the protracted flashback which the original series also covered) with production cues from the last version but with BETTER, digitally enhanced animation, and inclusion of manga elements missed out from the original run. So came about Berserk: The Golden Age, three films which ultimately halted at the same point in the story as its predecessor.

In truth, the films are something of an oddity. Both the anime adaptations cut some of the same content from the manga (often pointless sequences where the main heroine, Casca, conveniently has her armour shed in the course of the action for the titillation of the readers – thank god they cut those) but the latter version sought to address some notably missing content from its predecessor. In the process, it ends up culling some of the other (rather more nuanced) background to the characters and truncating other elements. Some of this makes sense; some of it makes me wonder if the films would be as comprehensible to someone unfamiliar with the property. 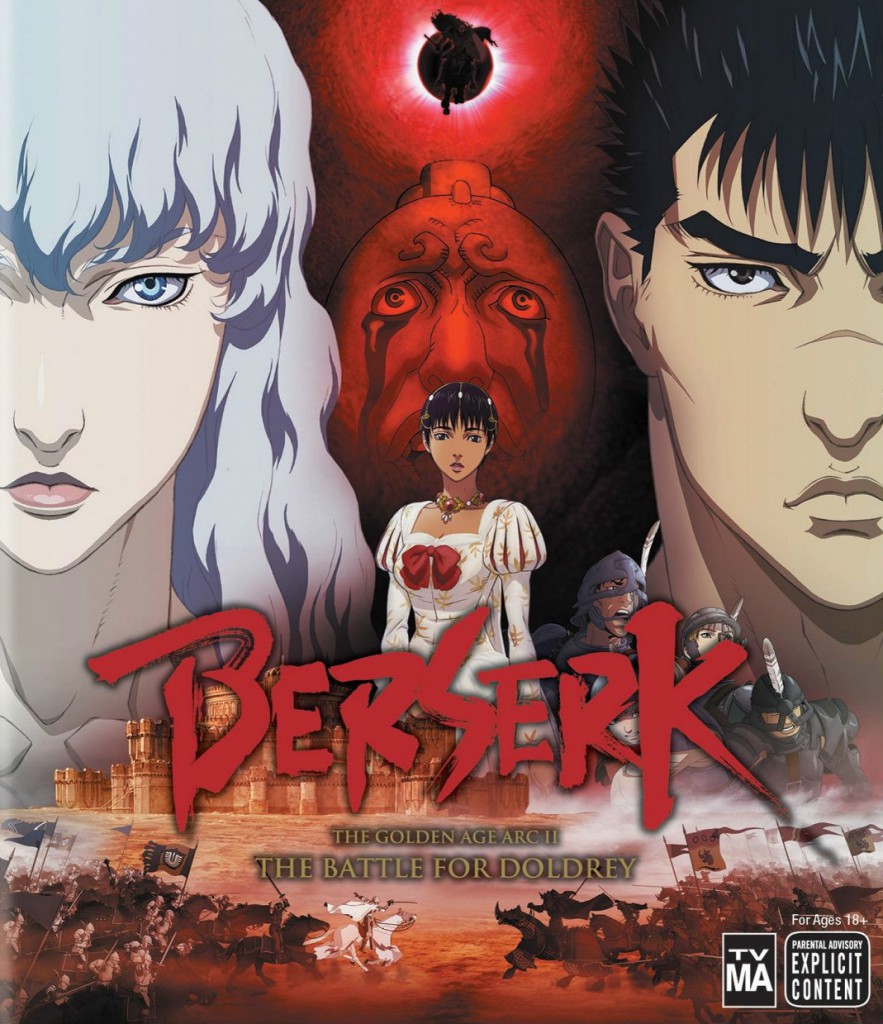 Bizarrely, for all the money poured into it, The Golden Age does still have animation issues. A number of the action scenes are rendered with 3D models of the characters which frankly look clunky and incongruous alongside the traditional animation elements and the contours of the faces for these models are abysmal. Only by the third film had they sussed that drawing over the faces of these models significantly improved the experience. The impression is of a version that is not quite thought through. (And regrettably, the trailer for the new series exhibits some of the same 3D graphical follies…). It might just be my exposure to the older series first and my preference for it, but The Golden Age Arc is a missed opportunity. Still very good, by any measure, as they didn’t spoil the innate quality of the material, but the time afforded to the story by a longer series than the shorter running time of three modest features outdid the flashier and not always superior production values.

And why did this version curtail so abruptly? Was it a slightly inferior product? The reasons are harder to ascertain. The studio behind Berserk had previously announced their intention to proceed further with the material in the films but this gave way to a scarcity of announcements of when the next instalment was coming. Now we learn this has been abandoned in place of the new series. There has always been a certain amount of creative continuity between the versions and much of the work on Berserk (2016) appears to be coming from the same crew as The Golden Age so it may be that the series instead offers a direct continuation of the films rather than another reboot. That has not been confirmed though. The change in format makes sense. The interest and money to be garnered from an ongoing series with its advertising and distribution potential could prove a lot more appealing than a few sporadically released straight-to-DVD films in an obscure market. The films may prove better as advertising – the proverbial mini-series to the main run – to help build up an audience in generations not exposed to the dated older attempt.

Will the new rendition of Berserk prove popular? Its content more than likely prohibits it from the success of goliaths like Attack on Titan and One Piece but it could still do respectably. Will it get further than its predecessors did? In some respects, the crew have circumnavigated the issue as they are starting out with the Black Swordsman Arc rather than another retread of the Golden Age. Will it be any good? There is, of course, no knowing until it is out, but I will say this: with the 1997 series as a forebear, it has a very hard act to follow.

*’Josei’, the demographic of manga and anime pitched at adult women, is hideously under- and misrepresented in the West.

Previous: Midnight Special: A spectacular misfire
Next: Bête: Wait here, the cat had said. Fuck that.