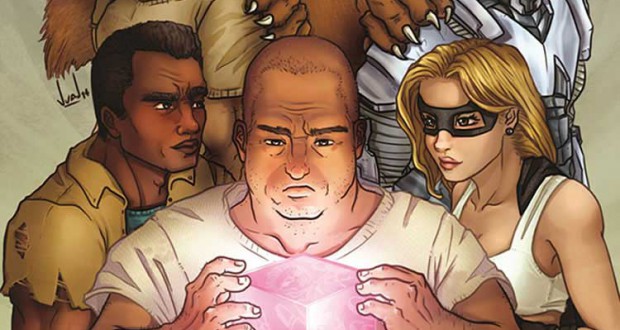 With the popular consciousness of comics so dominated by the BIG TWO and their movie-fodder superhero fare, it is nice to get a chance to dip into the independent alternatives. Life on the fringes comes with all manner of originality and experimentation, particularly on up-and-comers who are just launching material with reputations to forge. But for all the promise of the independent scene, every arena will have dud entries that don’t pass muster. The Almighties is one such comic. 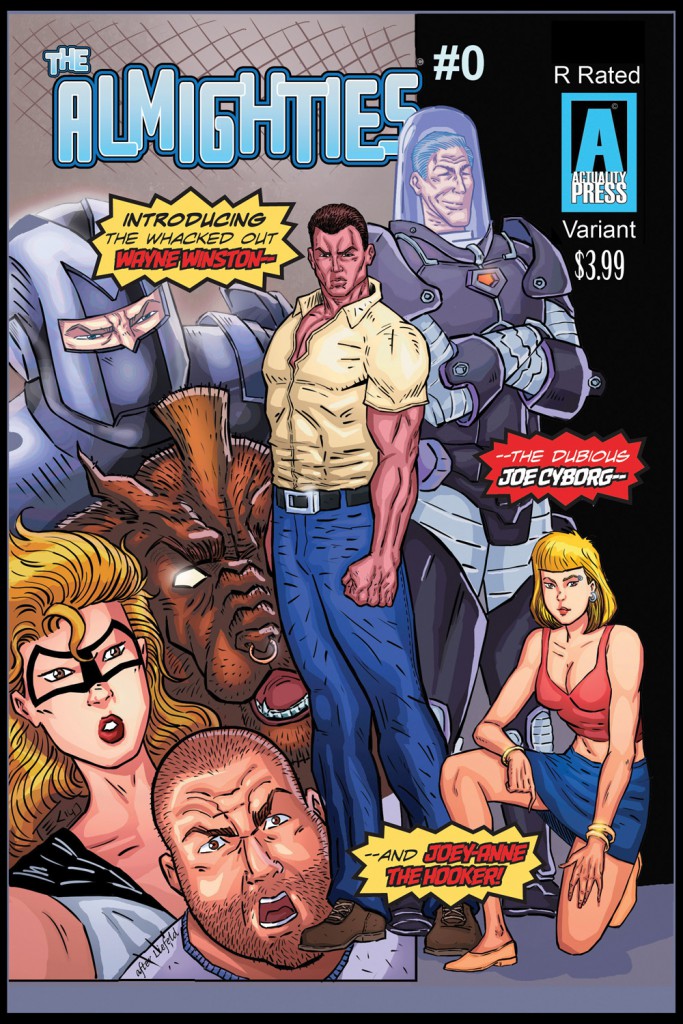 The Almighties pitches itself as a parody of The Avengers but with its bizarrely dated references, muddled content, and rather vacuous attempts at satire, I can’t fathom its angle. The depiction of a superhero team is unrepresentative of modern trends in superhero comics (there’s nothing resembling the zeitgeist of the Marvel and DC comics on the shelves) which suggests it is aimed more at the impression of superheroes created by their film counterparts. The presence of a character called Phil Coleslaw who resembles Phil Coulson from the Avengers films and Agents of SHIELD series (because having his name vaguely resembling a foodstuff is funny, apparently) supports this theory, but the comic had nothing to say about the Marvel Studios product.

The composition of the Almighties themselves doesn’t exhibit any understanding of the vogue for superhero teams. We have a raving mercenary who might have been vaguely parodic in the 90s and is used to make a weak A-Team reference. There is an 80s throwback British hooligan anarchist werewolf. Maybe a spin on Marvel’s Werewolf-by-Night but that’s hardly mainstream enough to be the root, surely. Ms. F is based on Ms. Marvel (one version or another) but has nothing specifically addressing this character. Her one notable sequence in the comic involves the caption ‘She’s insecure, she has anger issues, and needs to be a part of something – something that has someone who can keep her in check’. I sincerely hope this is an attempt to satirically comment on women’s roles in comics, but there is nothing indicating irony in context. I find this worrying. 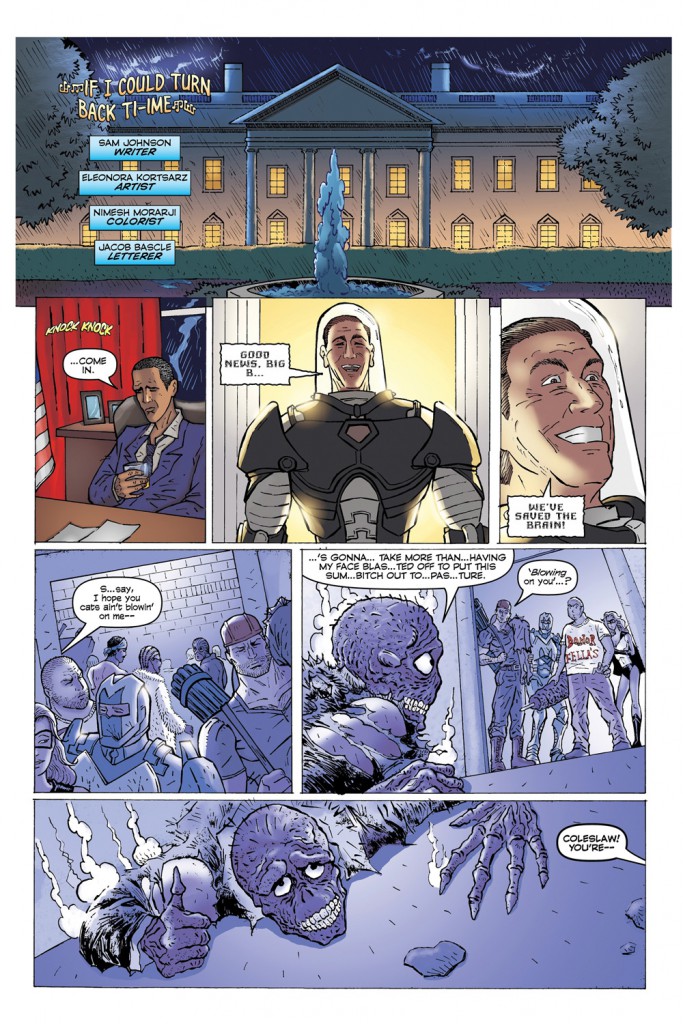 Structurally, the comic is wasteful. There’s a brief intro giving the origin of Maxi-Tron, an Iron Man pastiche, which goes nowhere. A framing narrative then ensues to introduce us to the characters above, which does not lead to anything either. The comic then shifts to deliver a story about the attempted eviction of a super-powered schlub and his mates from an underground lair. This is filled with incomprehensible non-sequiturs trying to masquerade as repartee. Is this baffling segment trying to ape dialogue in superhero comics? The final section returns to the main Almighties team for a time-travel gag plot and a joke about a prostitute performing a blowjob (again, struggling to detect any hints of irony in the depiction of women here). What was meant to be the thrust of this issue? It works neither as an anthology or a cohesive single narrative. I am genuinely confused.

What about this is designed to mock or send up comics as they are right now? 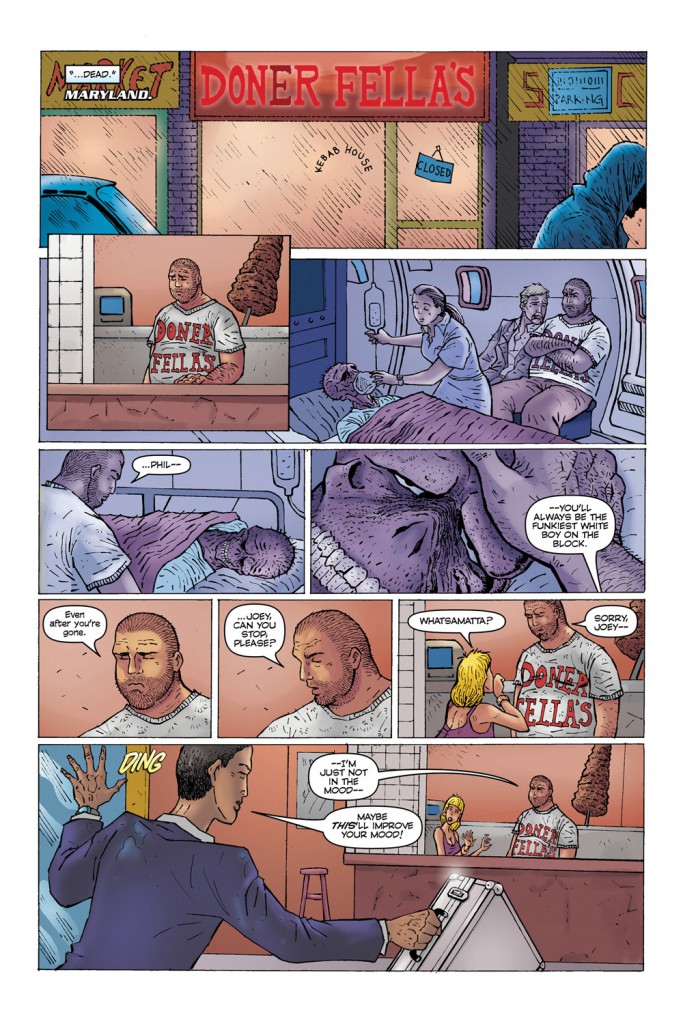 Furthermore, in what era did the writer think this content was topical? There is a George W. Bush gag. When the world’s media is concentrated on Donald Trump being the American rightwing demagogue de jeur, this comic feels it is timely make a joke about a statesman who has been out of office for 8 years. Even if it was politically topical, what about this is designed to mock comics as they are right now? How does this relate to the mission statement of mocking The Avengers and the industry at large? Where’s the griping about Marvel films steadily heading towards the utterly bland or the corporate desperation of DC? Where is the evisceration of the obsession with reboots, relaunches and regurgitation in comic series? This doesn’t even approach the conceptual deconstruction that comics like Alan Moore’s Watchmen or Warren Ellis’ Stormwatch and The Authority offered. Those books are still relevant years and decades later. The Almighties isn’t even relevant now.

With jumbled and eclectic art, I can’t even recommend The Almighties on aesthetic grounds. The rotation of artists exacerbates the not-quite-an-anthology messiness and the style does nothing to relate to Marvel or DC house-styles or any of their big name artists’s foibles. It has a particularly web-comic demeanour. Like the plotting, characters and humour, it is a half-formed effort lacking a clear and unified voice. Sigh… Such a waste…

Verdict: This comic left me exasperated and confused. Just what was the point?

The Almighties #0 is out now and available at www.almightiesamass.com and www.comixology.com

Previous: Breaking the Glass Slipper: Gender inequality in ‘best of’ lists
Next: Miles Ahead: Come at it with some attitude