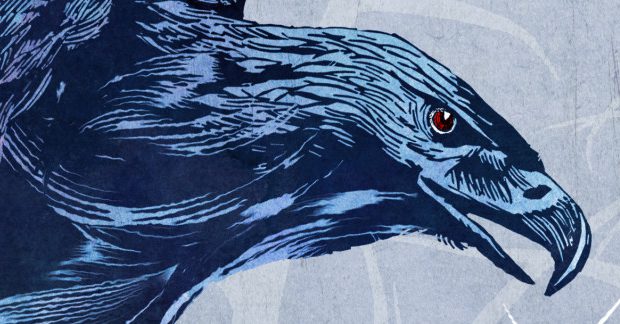 It’s only natural that you end up comparing a writer’s new work to what they’ve previously delivered. Given that Jen Williams’ Copper Cat series was one of the most fun I’ve read in recent years, it was always going to be a hard act to follow. The characters she gave us were so brilliant you wished you were friends with them in real life. But she bowed out of that world and moved on to pastures new. Is it as good?

The Ninth Rain follows, for the most part, three characters of wildly different backgrounds as they each deal with their personal and global issues. The land of Sarn has been thwarted by ‘the Wild’, areas of poisoned land that are a result of a war between the people of Sarn and a mysterious enemy that has appeared in their world a number of times throughout their history. For the previous ‘Rains’ (how they denote each arrival of their enemy), the Eborans – vampire-like creatures – have defended the land for all of Sarn’s people. But after the Eighth Rain, the Eborans’ god died, and with it all the Eborans’ strength. The intrepid and curious Vintage, her Eboran ‘muscle’ Tormalin, and an escaped fell-with Noon cross the various lands of Sarn in the hopes they can finally get to the bottom of the mysteries plaguing their lands for generations.

‘Sex and blood: the two were always mingled…’ 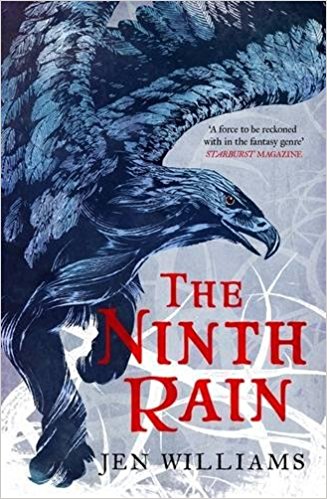 Williams is on form again when it comes to writing in a fun and engaging style that propels the reader on. You will want to put aside all real world responsibilities in favour of reading The Ninth Rain because it is just good damn fun. Having said that, I had a few niggles with her tendency to use tired clichés, for instance, ‘a shark moving through still waters’. Williams has also carried over her reliance on characters with plenty of spunk and attitude who shoot cracking quips at their friends and foes, something I always enjoy.

It is clear that Williams’ strengths lie with ensemble casts of characters. Yet again she is focusing on a main group of three, and again it works well. This set up of three protagonists, all with wildly different personalities and backgrounds is not something new. Vintage, Tormalin, and Noon are the Kirk, Spock, and McCoy for contemporary fantasy readers. The characters have their fair share of quirks to annoy each other while still building a solid friendship that is realistic and enjoyable to watch as they grow and change. Meanwhile, these fleshed out characters are similarly supported by fantastic worldbuilding. When it comes to creating new fantasy worlds, many writers focus too much on what the ‘cool powers’ do. But Williams has actually taken the time to develop a world that is a product of those special abilities. The magic exhibited by the characters is built into the foundation of the world, including the infrastructure (for instance, the train line – ‘winnowline’ – powered by the fell-witches’ winnowfire).

‘There is nothing finer than knowing the truth.’

My main complaint arises from the use of extracts from ‘the journals of Lady Vincenza ‘Vintage’ de Grazon’ as chapter epilogues, which are undisguised exposition dumps. In theory, I don’t mind this kind of approach – intercutting narrative with excerpts from what is basically a history book to give the reader the context of a fictional world. However, it feels rather forced here. Sure, Vintage is set up to be a history buff with an inquisitive mind, but why do her journals read like textbooks? The word ‘journal’ doesn’t imply that she was attempting to write a historical record of events hundreds and thousands of years before her time. I didn’t buy it, which made me resent the exposition drops, despite the interesting world Williams had created. The thought that went into the worldbuilding is top notch, just a shame about the delivery of it. 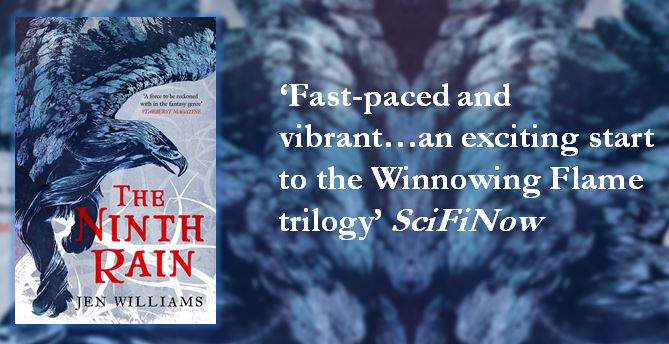 In her first series, Williams struck gold with her protagonist, Wydrin. She was everything you could ever ask for in a protagonist and giving readers an example of a fantastic female character written by a woman that proved beyond a shadow of a doubt that these factors don’t lessen the merits of a fun fantasy novel. For The Ninth Rain, Williams again structures the bulk of the story around a central female character – Vintage. And while she is a lot more interesting than many ‘strong female characters’ we see, she doesn’t have quite the charisma Wydrin did. But my biggest issue – not just against Vintage but with the novel as a whole – is the dialogue affectation Williams uses for the character. Almost every time Vintage addresses another character she will use the phrases ‘my dear’ or ‘my darling’. It gets tedious fast.

Perhaps what I love most about Williams’ work is the way she plays with established genres and tropes, delivering something that always feels fresh and original. With The Copper Cat Trilogy, it was a sword and sorcery, Dungeons and Dragons style fantasy adventure with a woman and a gay knight leading the charge. For The Ninth Rain, she has taken tropes that are often associated with that kind of dark, broody paranormal romance titles and breathed fresh life into them. From dragons and mages in her first series, she is now tackling vampires and witches. But don’t worry, these aren’t sparkly or emotionally melodramatic teenaged vampires, these are bloodsuckers with their own culture, history, and personality. This is exactly the kind of thing fantasy needs more of – writing that takes what we know and love and does something new with it. Other writers should learn from Williams. Risks are worth taking. Have fun and explore what else the genre has to give.

Verdict: Great fun despite a few niggles here and there. I’m definitely looking forward to where Williams’ takes this trilogy.

Previous: Life: Be careful what you search for
Next: Nostalgic Impulse: Network (1976)