Home / Film / The Beguiled: Can I get you anything 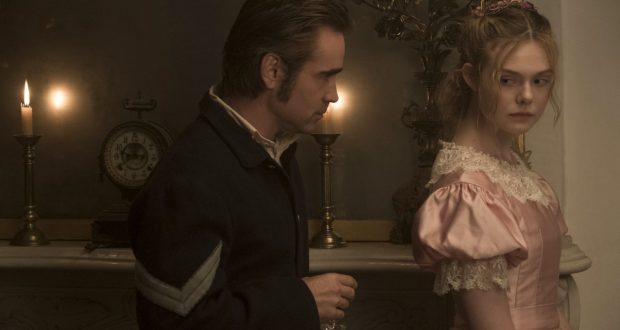 Corporal McBurney is a wounded yankee soldier who throws himself on the mercy on Miss Martha’s secluded girls’ boarding school as the American Civil War rages just beyond the woods. McBurney is Initially treated with disdain by the young Southern maidens and their two wardens, Miss Martha and teacher Miss Edwina Morrow, but that changes in short order. The soldier quickly finds himself the target of schoolgirl crushes, increasingly bold flirtations, and all the pent up energies that an isolated same sex environment can muster.

What sounds like a rather trite male fantasy on paper is framed very sensibly around the female viewpoint to make a much more interesting interpersonal drama.The Beguiled is an adaptation of a novel by Thomas P Cullinan, and has garnered wide attention on the festival circuit. Sofia Coppola, certainly an auteur director but viewed as having a somewhat irregular output, won the Best Director for the film at the Cannes Film Festival and was in contention for the Palme d’Or. The Beguiled is exquisitely shot and has firm grasp of atmosphere and sexual tension. The main issue, if any, is that the film doesn’t stray from the predictable direction of the plot, despite taking other liberties with the tone and content of the source material.

Naturally, the film plays with whom is the one being beguiled in the story 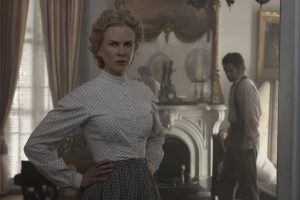 There is in fact a previous adaptation from 1971. That Clint Eastwood vehicle, directed by Don Siegel, was an altogether more exploitative and lurid affair. The route taken by Coppola is to excise the unsavoury incest fantasies, flashbacks and male gaze. Her film is much more about the sexual (re)awakening of these women as they move from reserved conversation to more overt overtures with their patient.

Coppola’s strong eye for environment and stylish shooting is very effective at establishing the mood quickly. There’s a palpable heat and humidity on screen which you can see the buttoned up characters chafing under, and the diaphanous lighting that ripples through the trees furthers the sensuous tone. You can tell things want to get hot and heavy even before Nicole Kidman starts indulgently stripping Colin Farrell and spongeing him thoroughly to ‘clean him up’ *wink*. 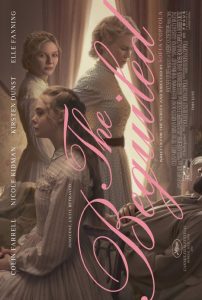 I can see some having a problem with the very blunt or thinly-veiled attempts at flirtation, both on the part of Farrell’s convalescent soldier and by the women themselves. In fairness, the idea is that the soldier fancies himself more of manipulative ladies’ man than he is: he’s largely preying upon the isolation and desperation of these women who are starved of male attention. The schoolgirls and their two guardians are, by that virtue, unpractised in enticing men so their efforts and resultant internecine sniping aren’t too sophisticated.

Ultimately, given the grizzly way the story progresses, The Beguiled is more of a melodrama than the delicate historical drama it may first appear to be. It’s very well-performed, though would be hamstrung without Coppola’s cinematography. The main issue remains that by the end, for all its fine work, The Beguiled doesn’t do much more to the story than invert the male gaze. There’s no biting twist or revelation on the theme which really would have carried it a lot further.

Verdict: An entertaining and well-shot tale of Southern gothic sexual tension that could really use a stinger at its finale.

Previous: Darien by C. F. Iggulden
Next: Dunkirk: You can almost see it from here…