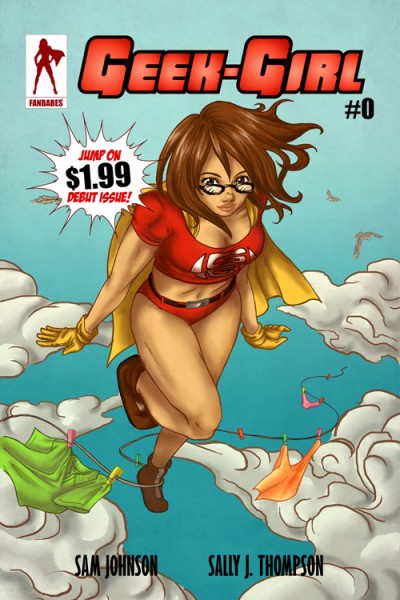 The premise of Geek-Girl is obviously aimed at the typical comic book reader: young males. A man creates a pair of glasses that give him super powers so that he might impress the girl of his dreams. Standard. But before he can reap the benefits of his newfangled invention, an enterprising young woman wins them in a game of strip poker (with the help of some manipulative girl on girl action). Lesson to be learned? Never underestimate us girls (my father taught me to play poker as a very small child, just try me)! As the tag line warns us, however, ‘With great glasses comes great klutziness.’ 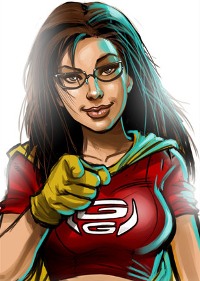 Our protagonist struggles to adjust to her new abilities. Worse than that, she is teased mercilessly by unpleasant, shallow girlfriends. When Geek-Girl is out with her friends, she accidentally spills drinks on outfits and generally causes havoc. The abilities don’t impress anyone; she leaves, head hanging low. Cheer up Geek-Girl, all is not lost! As she is leaving the club, she happens upon a couple arguing – in a situation that looks on the verge of escalating to violence. And thus, a hero is born… and the ridiculous superhero outfit, complete with lycra, soon follows.

One thing that jarred with me is the acquisition of the glasses. Who would give up glasses of that calibre for anything? I mean, really… If I was stupid enough to enter a poker competition for them, I would at least be smart enough to run off at the first sign of me losing. Who is this stupid man who gives them up? Or does he do so without much concern because he knows how to make more? And if so, are we soon going to have a world full of glasses-wearing superheroes?! On the other hand, a side effect of the dishonourable acquisition of the glasses makes for a flawed, more interesting protagonist – a character that has some potential. 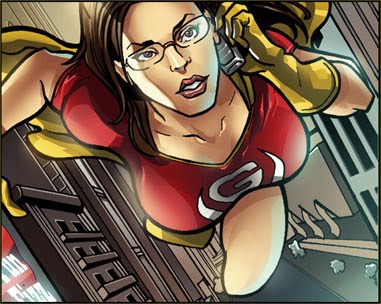 The comic shows a lot of potential, but much like a debut novel, there are certainly teething problems. The character and set-up have a lot of room to grow and it will be interesting to see where the writer takes them. The ‘origin’ – for a superhero – is remarkable pain and angst free (no murdered parents, for one – that we know of anyway), which is a fresh way of approaching an oversubscribed genre. In the final page of issue #0 we get a hint at a real baddie – making me very curious as to the kinds of superhero shenanigans that will follow!

Make sure to check back in at Pop Verse tomorrow for an interview with Geek-Girl’s creator, Sam Johnson!