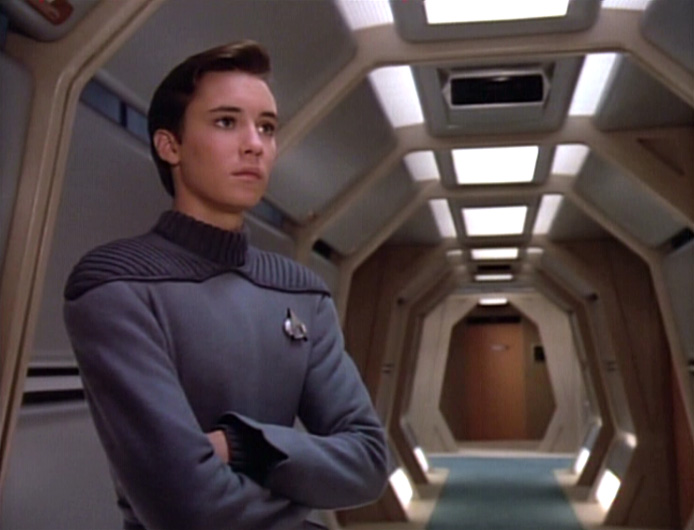 I grew up on a steady diet of science fiction thanks to geeky parents and a firm belief in family time (aka sharing our loves – which just happened to coincide). One show in particular that I loved was Star Trek. While I didn’t get into my (now) favourite series (The Original Series) until I was in University – thanks to an inspired 18th birthday present of the complete first season – I watched The Next Generation, Voyager, and Deep Space Nine as a kid. My particular favourite was TNG, in a large part the result of a mega-crush on Wil Wheaton. 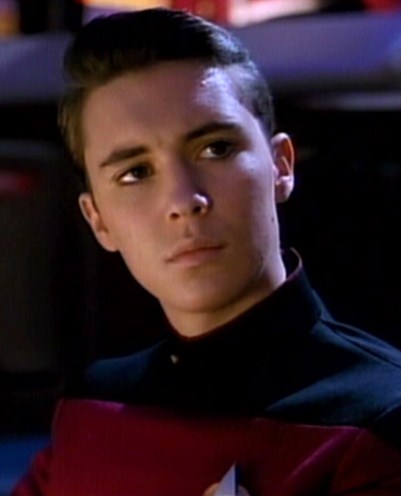 This crush was not limited to Star Trek. I watched Stand By Me constantly (other girls were silly enough to fancy River Pheonix, but I knew where it was really at). Little did I know at the time, another favourite of mine, The Secret of Nimh, also contained a helping of Wheaton. Then I grew up and further indulged my love with constant reading of his blog, rapid consumption of his books, as well as lapping up everything and anything he appeared in, including The Big Bang Theory, The Guild, and Eureka. I can’t get enough of Wil Wheaton.

Without trying to become the TNG version of a Jar Jar Binks apologist, I would like to defend little ol’ Wesley Crusher. When I loved him, I was a kid too, and I wanted to be Wesley.

This life-long love of mine is much maligned in the media. No one seems to look back fondly on Wesley Crusher. But why? Oh sure, he was a little bit whiney, angsty, and certainly arrogant, but I still loved him. He was a kid living the dream – exploring the galaxy on a flagship starship, going on adventures and experimenting with ‘science’.

The character of Wesley is often considered to be Gene Roddenberry’s idealized view of himself – ‘Wesley’ being Gene Roddenberry’s middle name. The character is considered a ‘Mary Sue’ as a result; a trope that also found its genesis in Star Trek fanfiction. Wesley has been so tarred with this brush that for a while, TV Tropes named the trope of ‘Creator’s Pet’ ‘The Wesley’. Roddenberry’s love for the character is quite evident in the time Wesley spent on the enterprise – a main cast member while Rodenberry was alive, but quickly relegated to recurring after his death. 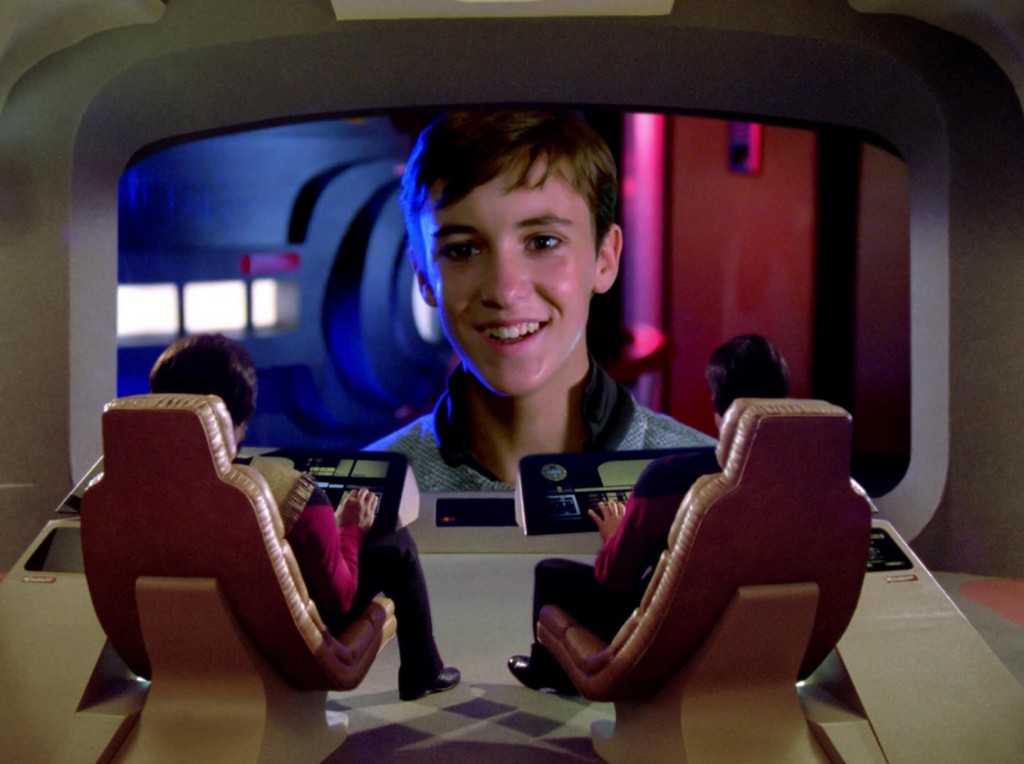 Why Wesley was awesome

Wesley taught me about hard work. He failed his first attempt at passing the Starfleet entrance exams (‘Coming of Age’). The next time he was due to complete the exams, he passed the written but failed to take the oral, as he was off saving Riker, Deanna, and Lwaxana (‘Ménage à Troi’) – you know, as you do. Finally, he earned his place at Starfleet Academy (‘Final Mission’) through hard work and persistence (he was finally recognised for his work as ensign on the enterprise). When his dreams were thwarted, he didn’t give up.

Many of the complaints about Wesley are along the lines of ‘why does the kid on board a star ship full of elite minds always save the day?’ I like to think that because he was a child, he came up with the solutions. Children have curious minds. They don’t dismiss the far off (and highly unlikely) chances quite so easily. The enterprise needed Wesley’s help. Or maybe this was me projecting? I certainly would have liked to be ‘needed’ by an important group of scientists in space!

When Wesley became a man 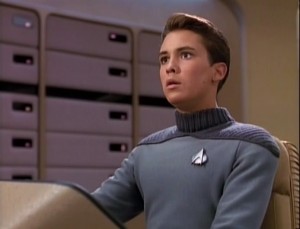 Then there is one of my favourite episodes, ‘The First Duty,’ in season 5 (Wheaton’s first year as a recurring cast member). While away at Starfleet Academy, Wesley is involved in a training accident and must face an inquiry board. His education at Starfleet hinges on the outcome of the case; the stakes could not be higher! What is great in this episode is that we finally see Wesley as a real character, not just a kid. He has his own motivations, difficult decisions, and ultimately chooses to grow up. We meet Robert Duncan McNeill in this episode (Voyager’s future Tom Paris), and he is (as becomes usual) up to no good.

‘The First Duty’ does creep over the line into preachy territory – as Star Trek so often does (sad, but true) – but I still love it. It’s intense! I felt completely invested in Wesley and his welfare. Afterschool specials are not usually my thing, but peer pressure is something that kids need to hear about – and most importantly, know that they aren’t the only ones who have to deal with it. Its ok if you mess up once in a while. When you think about it, hasn’t Star Trek always been dealing with relevant social issues under the guise of ‘science fiction’? Don’t you remember the races of aliens in TOS that are at war – one race with black on the left side of their face and white on the other, the other race with the reverse?

The best jumpers in the galaxy

Oh yeah, there are websites dedicated to the appreciation of these gems… 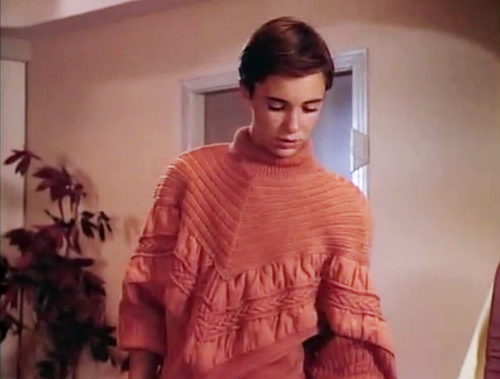 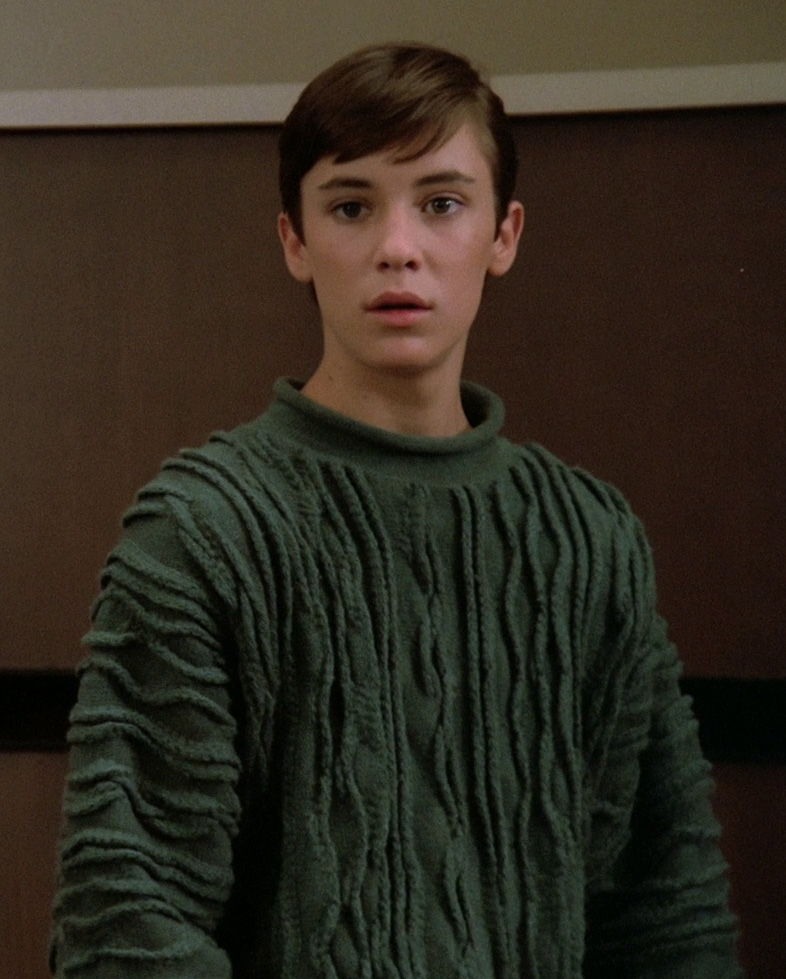 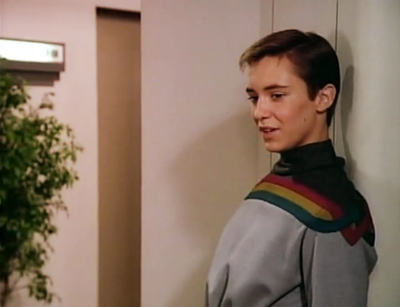 I liked Wesley. I was a kid when watching him solve problems and almost destroy the ship with his nanobot science project. I related to him. Wesley gave me hope that I could be in those worlds, talking with Aliens, and flying through endless space without having to wait to grow up (and for the invention of faster than light travel).