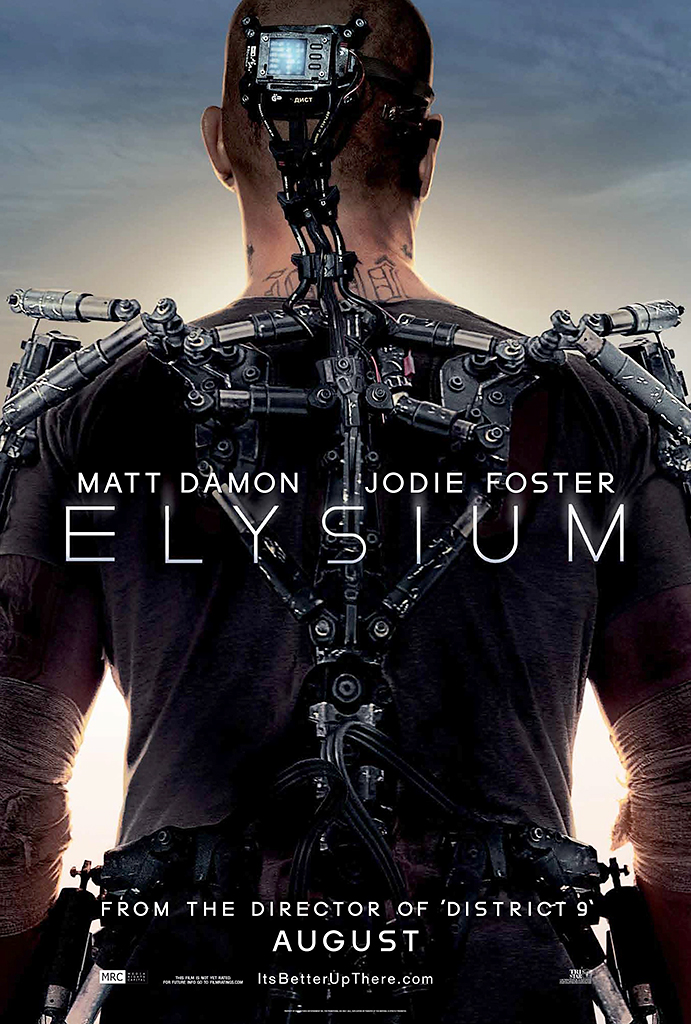 Neill Blomkamp’s debut feature film, District 9, was a complete surprise. It was refreshingly brilliant – a smart, well-made sci-fi that did well with both critics and the box office. District 9 gave me hope that sci-fi at the cinema wasn’t dead, and that maybe we would see a new wave of excellent sci-fi being made. Unfortunately, I’m not sure that was the case. Since 2009, there’s been a distinct lack of good, original sci-fi at the cinema. So, when I saw that Elysium was coming, you can imagine my excitement.

Blomkamp’s box office credentials graduated him from no-name South African actors to Matt Damon, Jodie Foster, and William Fitchner. I had thought, now that he is bigger, Elysium is sure to be grander than District 9. Admittedly it would have been difficult to increase the scale of his debut feature, as it was fantastically epic, Elysium does not come anywhere near it. The ideas are lots amongst the Hollywood action trappings. The message and ideals are unclear, characters are unrealized, there’s not a whole lot of point to a lot of the sci-fi elements introduced to the film. Where District 9 was well constructed and surprisingly sure of itself, Blomkamp’s sophomore effort fails in almost every way that District 9 succeeded.

The world in 2154 is divided – the wealthy live privileged lives on the safety of the space station Elysium, orbiting earth, while the poor remain on Earth’s surface. The Earth is overpopulated and run down, full of crime, poverty, and disease. Max (Matt Damon) is an ex-criminal trying to clean up his life by working at a local factory. Following a violent encounter with some robot police, Max finds himself at the hospital, where he bumps into ex-flame Frey (Alice Braga). He feels things are looking up – he is keeping away from his old life, he has a job, and he’s found Frey. 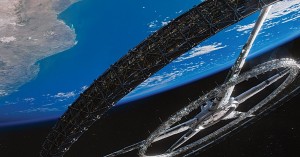 His good luck doesn’t last long, however. A workplace accident exposes him to a lethal dose of radiation, leaving him with five days to live. In a desperate attempt to stay alive, Max throws in with a local gang of criminals who can get him up to Elysium – where they have ‘med-beds’ that can cure any illness. In return for a free ticket up to the space station, Max has to steal information. Stealing this information doesn’t just involve breaking into a government building – his body is augmented with a robotic exoskeleton and the ability to plugin to other people’s brains and download data.

Meanwhile, on Elysium, the Secretary of Defense (Jodie Foster) is planning a coup. Inadvertently, Max steals the code that would allow her to seize power for herself, throwing Max into the deadly path of ex-Government mercenary Kruger (Sharlto Copley) as he tries to clean up the Secretary’s mess.

Who are these people? Characters need characterisation 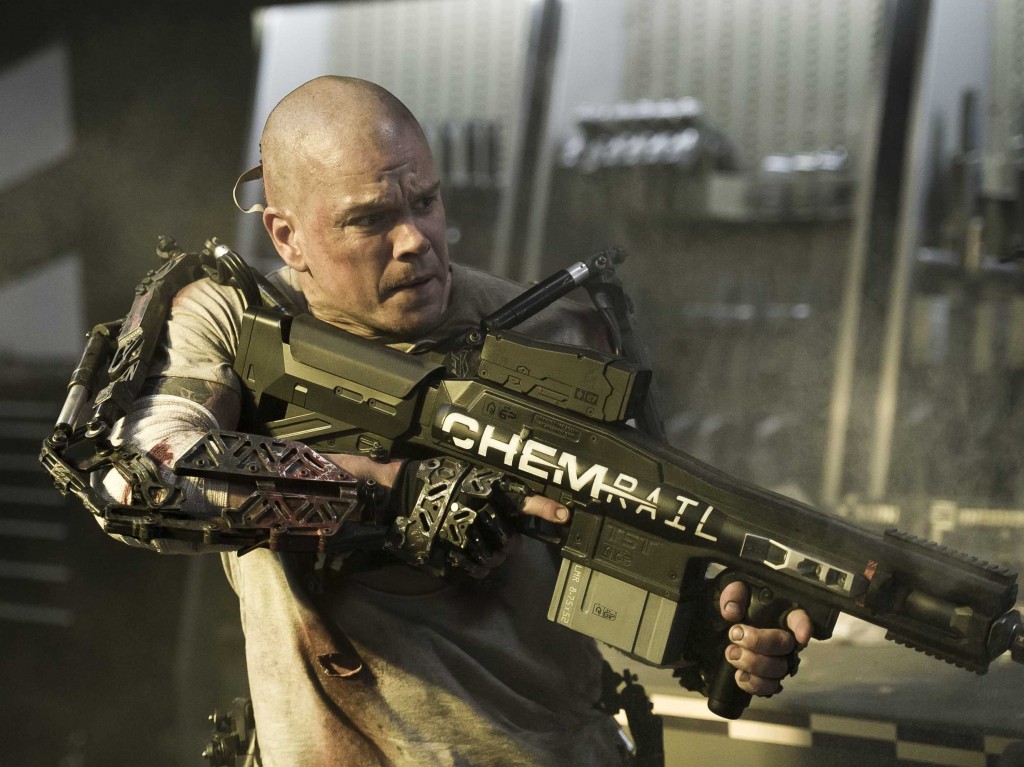 This film suffers from a lack of any well-defined characters. None of the characters have any clearly defined motivations, not even Max. Max is an ex-criminal – a car thief – and we see that he has been a thief since he was a small child. So why did he stop? What made him decide to turn his life around? Just because he didn’t want to go to prison again? We aren’t given any reasons why Max has decided to act the way he does. His motivations carrying him through the bulk of the film are relatively strong – he doesn’t want to die. Ok, sure, I can buy that. But that doesn’t really tell me who he is outside of the exceptional circumstances he is in – or how his general personality influences the decisions he makes once in that situation.

Max’s flame Frey is swept up into all this action for no real reason. She’s just there, so Kruger takes her along with them. And her motivations? Ok, sick kid, got it. But other than that, we are repeatedly told her life is ‘complicated’ but never get any more of an understanding about where she came from or how she ended up in the situation she did. Other than her being fond of Max, loving her daughter, and being a decent nurse – we know nothing about her. And that doesn’t change by the end of the film. There’s no character growth – there’s no real character at all. Why is she included in the first place? Maybe Blomkamp didn’t want it to be too much or a sausage fest or maybe he felt it necessary to include a love interest. But Frey’s story and her character add nothing to the film. 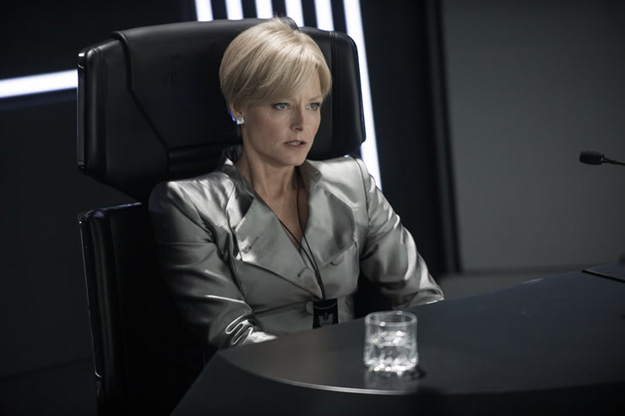 On the other half of the equation we have Secretary of Defense, Delacourt, who wants to overthrow the current president. Why? Well, something about him being a ‘pussy’ – too liberal, perhaps? Soft? It isn’t very clear. And why does she insist on overthrowing him the way she does, rather than calling for an election or debating the issues in a constructive way? Who knows. She’s just your average moustache-twirling bad guy with the motivation of ‘just because… you know, she’s evil’. Hmmm, that just isn’t enough for me. Jodie Foster is a brilliant actress and she could have brought something really interesting to a character like that – if they character had actually been given anything to work with.

In the shady underworld of the future, a gang run by Spider (Wagner Moura), charges top-dollar to transport refugees up to Elysium’s surface. Even when originally sending Max out to send data, all they are hoping to gain is access codes to allow easier entry to Elysium. It is seemingly all about money. And why shouldn’t it be? He’s just a criminal lowlife, right? So why does he become a political activist by the end of the film? That might have been a really interesting transformation for a character like him, but we aren’t given any of it. He was all about money – now he’s all about justice. What?! That makes no sense!

Where did all the sci-fi go? 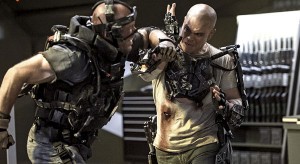 The set-up for this film has a lot of potential. And the opening sequences indicate a high level of science fiction to follow: robot police and servants, a paradise-like space station, and advanced medical technology that can heal any ailment. Along with the technological side of things, Blomkamp introduces a number of interesting philosophical arguments (which are also very important to the sci-fi genre). But as the film carries on, the technology and the philosophy get utterly lost. The robots are forgotten, we learn little to nothing about Elysium or the medical tech, and the ideals/philosophies that might be explored are pushed aside to allow for more standard Blockbuster action sequences.

The robots, so prominent in the early sequences, are set up to be an important part of the story. Spoilers – they’re not. They sell us the idea that Elysium is full of robots servants and protectors, and yet when the battle rages on Elysium, the robots are few and far between. Where did they go? Why make a big deal of them early on if they mean nothing to the story? What is the point? The tech in general is meaningless. Max gets an enhanced robot exoskeleton that turns him into a ninja badass – and that’s it. It is never mentioned again, the origins of the device are never discussed. Nothing. Oh, but Kruger gets one too – for the purposes of a robot-enhanced human fight sequence. But the tech isn’t really necessary, it doesn’t move the plot along, it is just kinda cool. Forgive me for wanting the tech elements of a sci-fi story to mean a little more than ‘Hey, that’s a cool gadget.’ This isn’t a tech expo people!

The various philosophical and political agendas Blomkamp addresses in the film are neither original nor fleshed-out. I enjoyed this comment on The Guardian, ‘The symbolism is about as subtle as dysentery.’ It really is fairly standard stuff – the wealthy keeping down the less fortunate. Bad, bad rich people. Aren’t they evil! Why not say something a little more interesting? Or approach it from a new angle? Or even come up with a new way for the downtrodden to deal with their oppressors? Nope, we just get bog-standard approaches to everything.

Verdict: Despite my overall negative criticism of this film, it is still relatively enjoyable. But it plays better as an action-thriller than a sci-fi. Fun in parts, bleak most of the time, and thoroughly unoriginal sci-fi.

Previous: The Spy Game: Spies, lies, and legends
Next: The Acquirers: Trust Me