Home / Film / CHAPPiE: An AI gangsta with a heart of gold 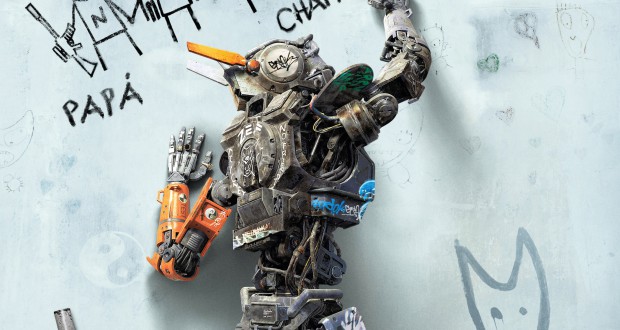 Since Neill Blomkamp’s stellar debut, District 9 (2009), he has continued to be an active voice in science fiction cinema. While Elyisum (2013), with it’s heavy handed moralistic metaphors, was a disappointment (knowing Blomkamp was capable of producing so much more), 2015’s Chappie is a refreshing return to form. While not quite as startling or original as District 9, Chappie is great fun to watch, keeping the tension cranked up to 11 throughout.

The film’s premise is relatively simple, and on the surface appears rather stereotypical. A large tech corporation is finding success building ‘scout’ robots used by the Johannesburg police force to bring down the crime rate. When their senior developer Deon (Dev Patel) thinks he has cracked true AI, he steals a robot marked for the trash heap. But before Deon can get the robot home, he is kidnapped. His kidnappers, Ninja, Yolandi, and Amerika, force Deon to create Chappie (motion captured by Sharlto Copley) for them. They want to use the police robot to help them pull off a heist. Meanwhile, jealous rival engineer Vincent (Hugh Jackman – using his real accent!) is determined to bring Deon and his successful creations down.

This is a new kind of life form, a new step in evolution. 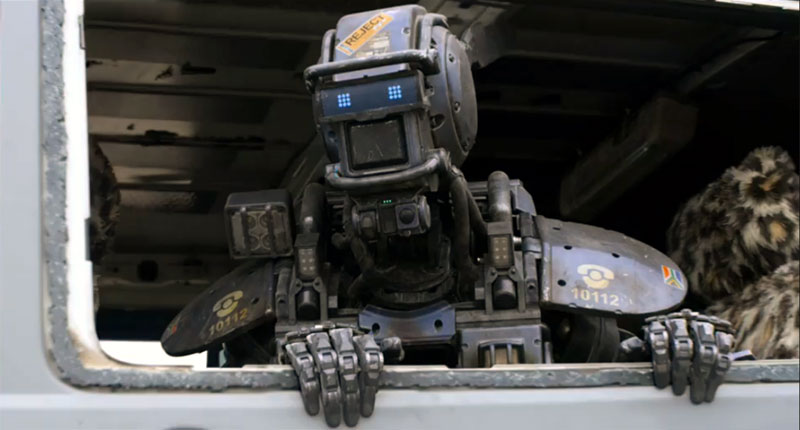 While the AI theme in science fiction is hardly a new concept (or underdone), what’s fun and different about Chappie is that it is never a question of whether true AI is possible – in the fictional world of the film it just is. Instead of getting bogged down in heavy philosophical debates of whether it is truly a replication of human intelligence, Blomkamp gets on with the story assuming that everyone accepts the premise. This take on the premise allows for a very different story to be told from those more commonly found in AI films. 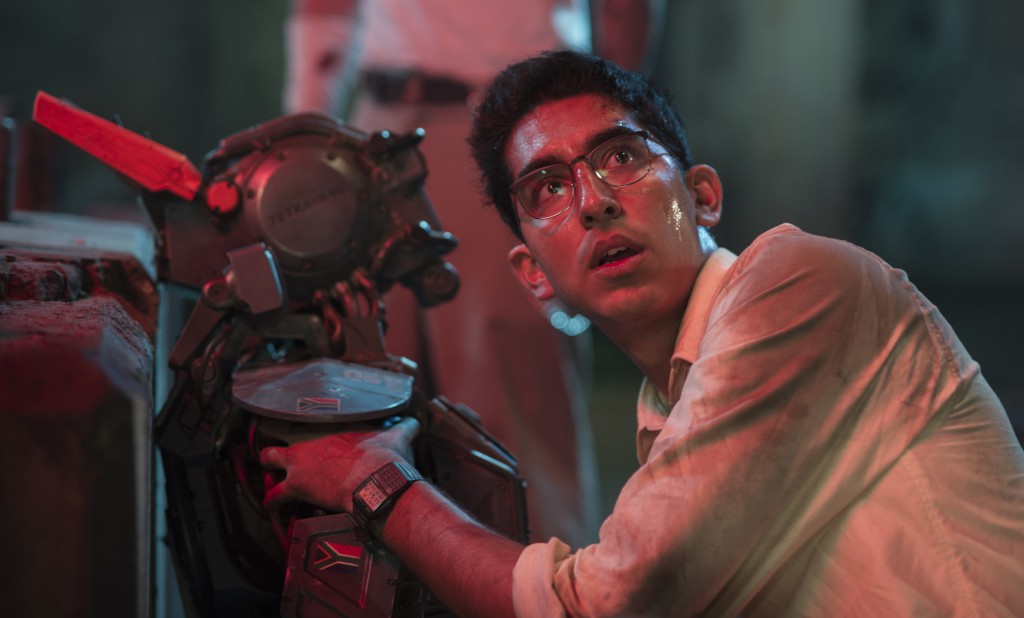 The AI that Deon builds is delivered to the robot shell as an infant. He needs to learn and adapt to his environment as he goes, thereby developing his own personality based on his set of experiences. While Deon attempts to ensure that Chappie does only good, his petty criminal ‘parents’ have other ideas for him. This allows Blomkamp to take a cursory look at a kind of nature vs nurture debate, and how easily naïve, trusting minds can be corrupted and taken advantage of. The film also takes a rather sinister turn when it uses Vincent’s kidnapping of Chappie as a comment on child kidnappings, when Chappie is taken ‘by a man in a van’.

The problem with artificial intelligence is it’s way too unpredictable. 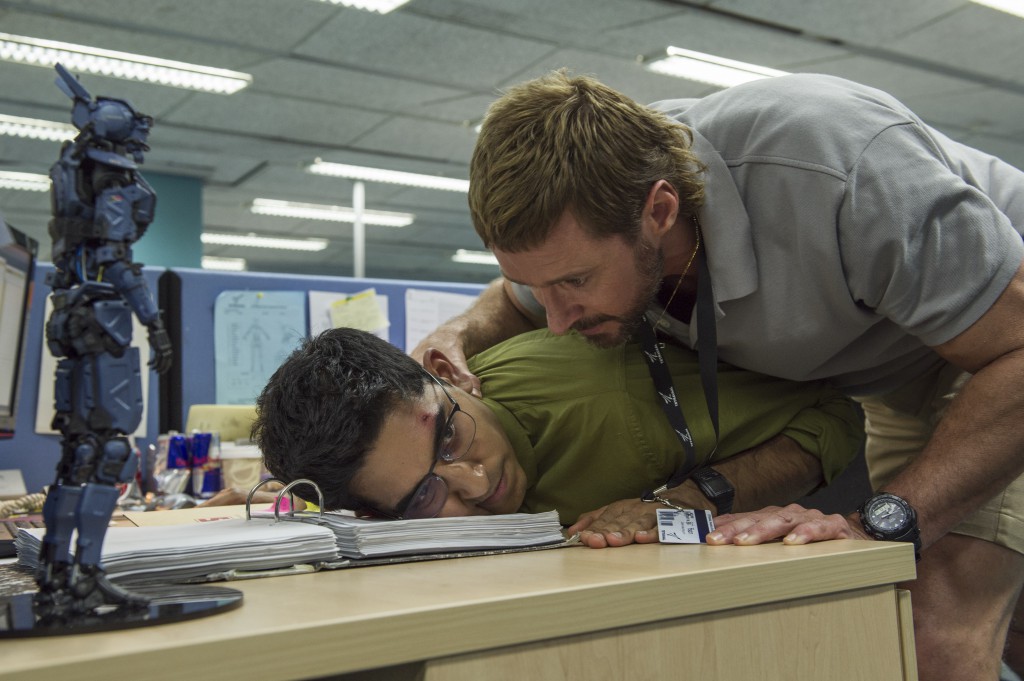 Chappie is the core of this film. He is the most well-developed and interesting character of the lot, bringing life to every scene he is in. In many ways, he is the most human character of the lot. Where the human characters tend to fit more into broad stroke stereotypes – focused geeky programmer, jealous evil ex-military engineer, gangstas, etc – Chappie’s personality is more fluid in a way that represents most of us. He is unsure of himself and what everything means, and is happy to learn and change his mind if the situation deems it necessary.

On occasion, some of the characters make decisions and logical leaps that seem forced or out of character, easiest the film’s weakest element. And without being spoilery, there are a few occasions where potential consequences are brought up to hover over the heads of characters and up the tension, then they never pan out into anything further. While Vincent’s comment that AI is too unpredictable might fly in terms of national security, it’s curious that the unpredictability of Chappie as opposed to his human friends is what gives the film life. On this occasion, being predictable is a handicap, leaving the audience bored by most of the characters other than titular Chappie. 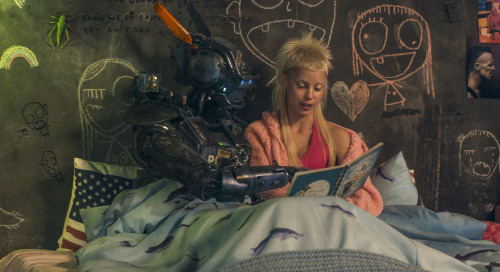 My favourite thematic element of the film is something that I tend to see more in Disney films than science fiction dystopias – but isn’t this what Ursula Le Guin was urging for at the National Book Awards last year? More positivity from SF rather than constant drudgery of worst possible scenarios? Despite the gritty urban setting amongst one of the world’s most violent, crime ridden cities, the film does manage a rather optimistic view of an individual’s potential. Deon is determined not to limit Chappie – where most people would think that an AI couldn’t be an artist or poet, Deon believes Chappie is capable of anything he puts his mind to.

Again, like many of my favourite Disney films (Lilo and Stitch comes instantly to mind), Chappie is the tale of an ugly duckling. Someone who is different from everyone else he meets and must try to find where he fits into the wider world around him. While so many other lesser films struggle to give their characters real agency, having them be reactive rather than active, Chappie manages to have one of those most agency-rich characters I’ve seen in a long time. Once Chappie is experienced enough to be more than an infantile consciousness, he more than chooses what he does, he actively seeks out his future. This makes him one of the strongest, empathetic characters I’ve seen in a long time, and a truly inspiring tale of an outsider finding a place for himself. 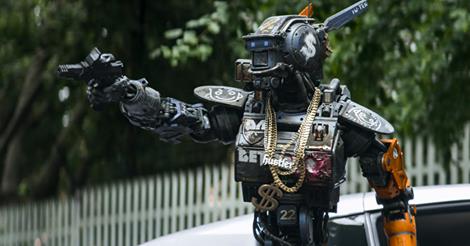 Verdict: While not perfect, Chappie is a fun, tense science fiction thriller that will have you wishing more human characters in films were as interesting as Chappie’s juvenile AI.