Home / Comics/Graphic Novels / Saga: Some monsters are worse than others 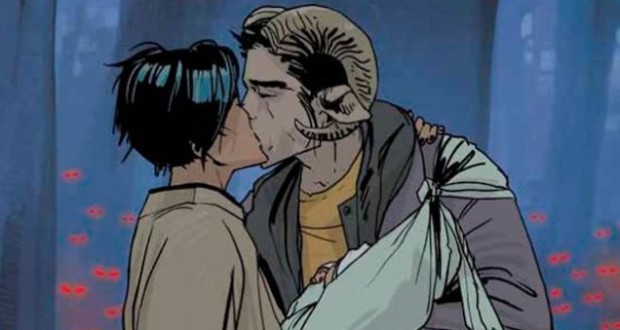 I know it’s a controversial opinion to have, but I hated Y: The Last Man. Yes, hated. That said, the premise of Saga was just too intriguing not to give Brian K. Vaughan another chance. I wasn’t sorry. Saga (trade paperback #1) is brilliant. Anyone who has read this and doesn’t think it completely blows Y: The Last Man out of the water is clinically insane. Fact.

When two soldiers from opposite sides of a never-ending galactic war fall in love, they risk everything to bring a fragile new life into a dangerous old world. 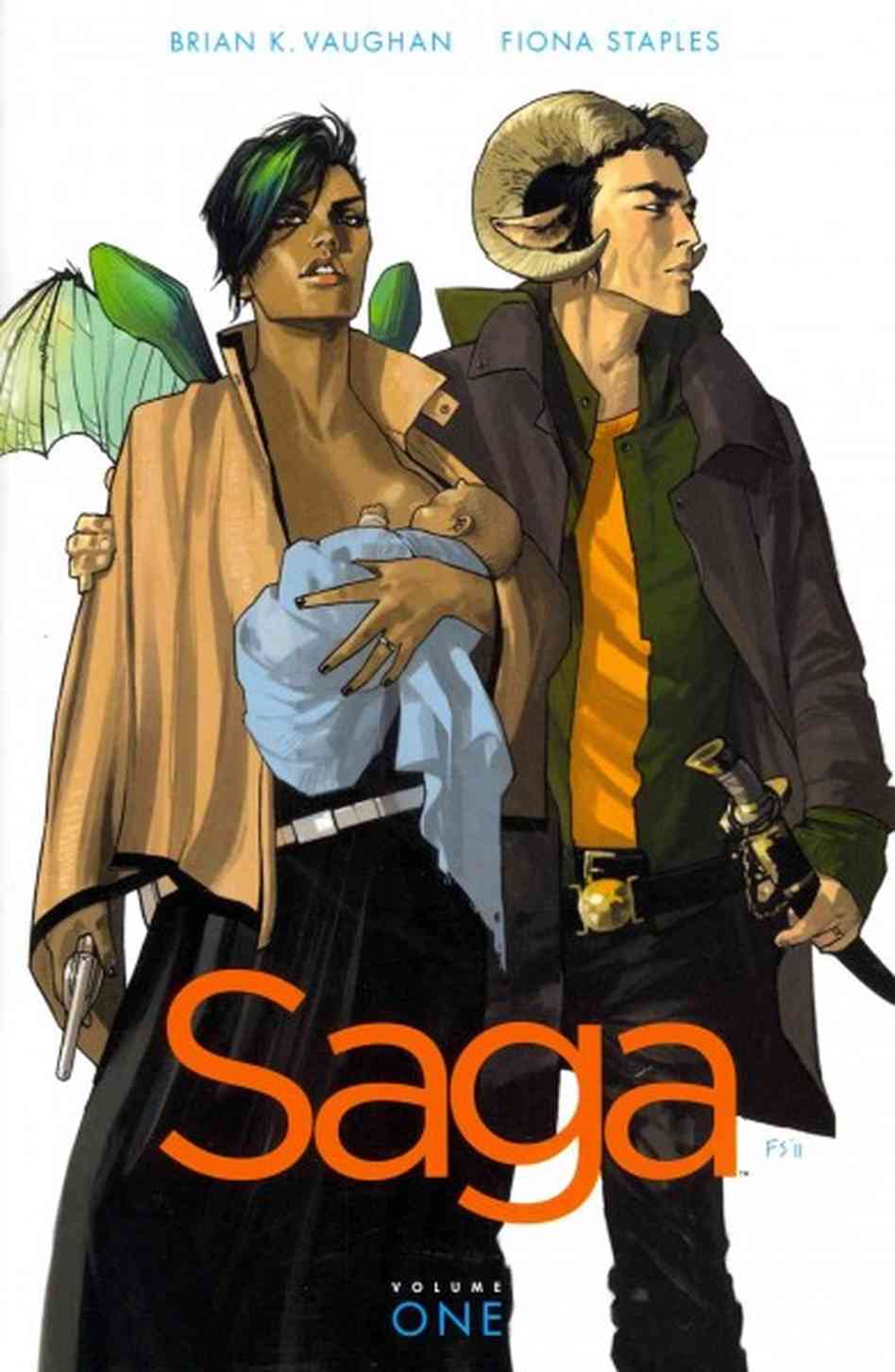 Planet Landfall and its moon, Wreath, have been at war for as long as anyone can remember. Two soldiers on opposing sides, Alana and Marko, fall in love and have a child. Their new-family bliss is swiftly curtailed, as both of them are wanted for desertion.

While running from the authorities and their hired guns, Alana and Marko have to avoid the war that rages on the planet Cleave, navigate their way through the native flora and fauna of the planet, and find a way to escape the planet, all while keeping their newborn alive and well.

What I have always loved about science fiction (and fantasy to some extent) is how it is often used to explore controversial issues and subject matter in a way that forces readers to look at the issue from another angle. It makes sense that comic books are a perfect medium for this kind of storytelling as well, and Saga does it better than most. The story touches on issues of race, war, sexuality, pedophilia, family, culture, religion… there’s very little it doesn’t touch on. And yet it never feels as though the writer is sacrificing story to get his ideology across. 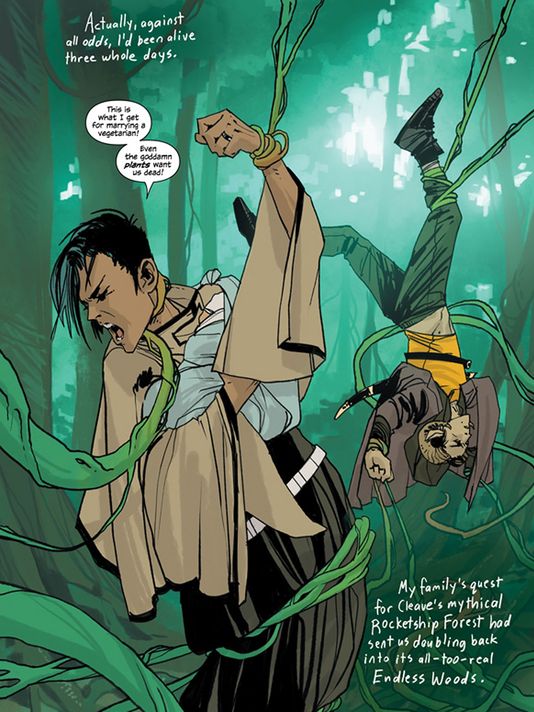 The main plot driver of the story is the star-crossed lovers angle of Alana and Marko. But it’s more than that, more than lovers from opposing sides of a war (a war that no one can remember how or why it started), but of different species. The war is basically presented as a race war – opposed to anyone who was born on the ‘other’, but it could be extended to cultural and religious wars as well, with both worlds having their own traditions. So what is the answer to that? Bring together those different races and traditions with an epic interracial romance.

More than this, the story is open to all kinds of loving relationships. Another interspecies romance is portrayed between rival bounty hunters as well as an open-minded approach to sexual exploration and fetishism. When freelancer The Will visits planet Sextillion in order to get his broken-hearted rocks off, there are all manor of sexual experiences available on offer. He is accepting of all but one: pedophilia. While he himself is portrayed as a kind of villain, or ‘monster’, he draws the line at pedophilia. The young girl’s pimp points out the potential hypocrisy in being a bounty hunter who would potentially murder children, but he’s too moral to fuck one. It makes for a more interesting character – after all, we all have our limits.

Art is one half of the medium 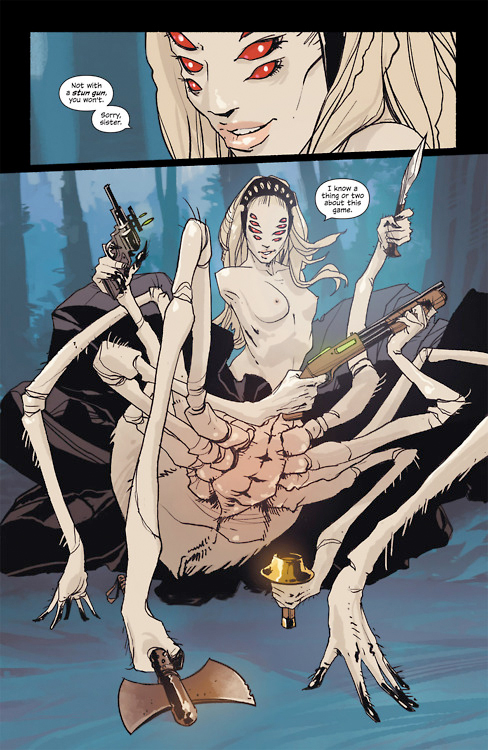 Comic books are both written and visual in nature. The story is presented both by the written word and visually represented action. The art in Saga is by Fiona Staples, with lettering and design by Fonografiks. Staples is spectacular throughout the volume. The creature design within the comic is truly inspired. Not limited to the usual fantasy or science fiction beasts, we have an original combination of the two speculative genres. From a lie-detecting cat, to humanoid unicorns, robot species with humanoid bodies and TV’s for heads, winged and horned creatures, dismembered ghosts, purple aliens, winged horses, giant spider women… the imaginative creations explode off the page.

What delineates a good comic book artist from an exceptional one is their ability to not only create the characters in the foreground, but to ground them within a real-feeling world, with it’s own quirks and traditions. With a story so embedded in different (and opposing) cultures, it’s imperative that the art reflects this opposition, something that Staples takes in her stride. Her talent is particularly on show with the juxtaposition of the futuristic robot race with their French aristocratic fashion sensibilities.

The story is presented in a traditional comic book format, with dialogue in speech bubbles and expository or 3rd person style narration in boxes, but what separates Saga is the narrative perspective of the outer story. Yup, you guessed it, this one’s a bit of a story within a story number a la Joseph Conrad. The overall story is being retold by the daughter of Alana and Marko, all grown up. Including her commentary in the art itself, rather than the usual superimposed lettering most common in comic books gives it a nice ethereal, disembodied feel. She’s there throughout the story, but at least at this point, it isn’t really her story. Not yet anyway. 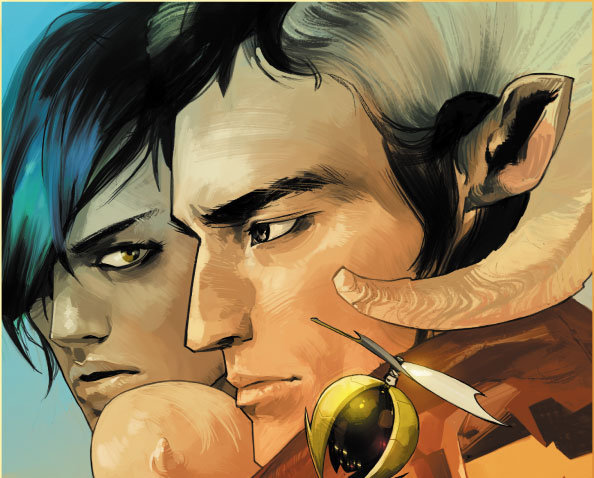 Verdict: Great comic book series. Definitely for more mature readers. I can’t wait to get the next few TP in the post…

Previous: Misogyny, stereotypes, and the gaming industry
Next: An antihero love affair: How the morally ambiguous can make for fascinating stories