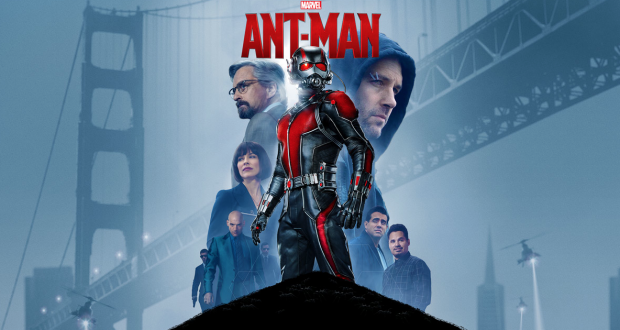 I was well positioned to be disappointed with this film. A studio having ‘artistic differences’ with the writer/director is never good – add the fact that the auteur in question was geek superman Edgar Wright and that Ant-Man was a passion project for him – it spells almost inevitable doom. But then again, the project still had Paul Rudd, the best on-screen everyman there ever was. So maybe all hope wasn’t lost. 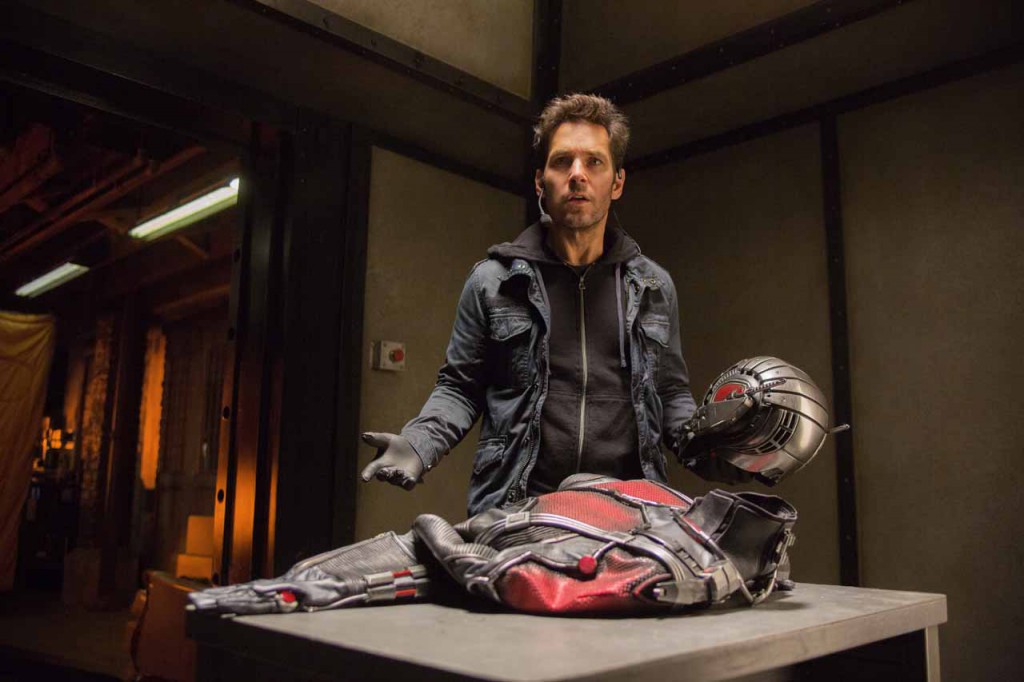 In fairness to Peyton Reed, the film is perfectly passable. But it really is just that: passable. Ant-Man is average in almost every way. And while Paul Rudd is likeable, he’s given very little of interest to do. The film falls into every superhero film cliché and plotting trouble, including having cool visual effects just for the sake of it (cue disabling the server room while flying on an insect through rogue bolts of electricity). The romance is forced and there’s no chemistry – though I have started to wonder if Evangeline Lilly has chemistry with anyone.

There are occasional glimpses of the film attempting to assert its own personality but they are quickly pushed aside for the mundane and run of the mill. The film lands best when Scott Lang’s sidekicks, Michael Peña, T.I., and David Dastmalchian are given (too little) screen time, and the cynic in me feels that these lovely interludes of fun dialogue are the leftovers from Wright’s original screenplay.

The film’s core theme is a simple one: good guy has made mistakes but tries to mend his ways. Of course, life isn’t quite as black and white as that. For Scott Lang (Paul Rudd) to get back on the straight and narrow, he might have to go back to what he does best: stealing. 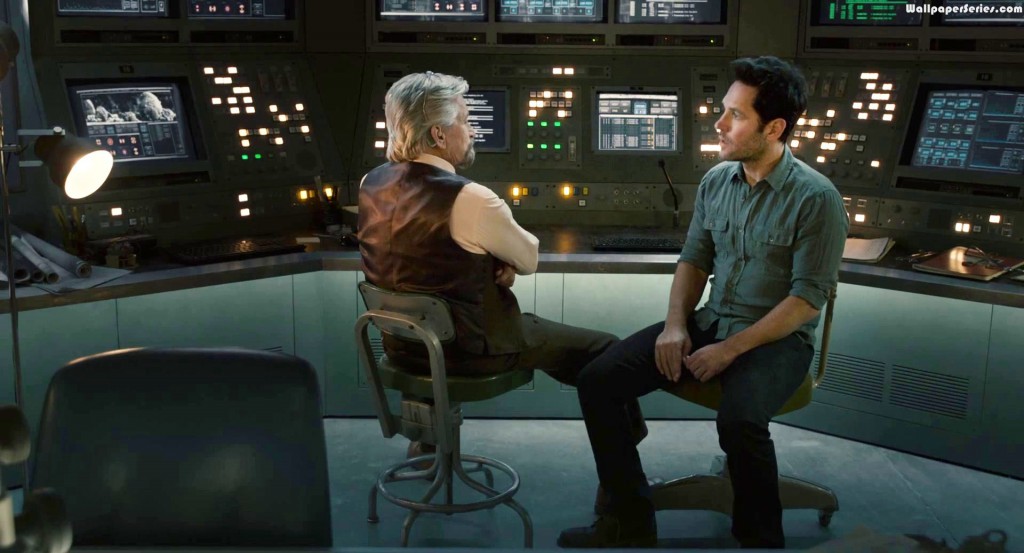 Hank Pym (Michael Douglas), retired SHIELD scientist, has kept his formula for changing the space between molecules a secret for a long time, determined to keep it out of the hands of the wrong people. Hank’s former protégé Darren Cross (Corey Stoll), however, has made it his life’s work to replicate Hank’s formula and he’s almost cracked it. Hank and his daughter Hope (Evangeline Lilly) plan to destroy all of Cross’s research before he can sell the weapon to Hydra – in comes Scott.

Hank’s ludicrously complex scheme is to have Scott become the new Ant-Man. Using Hank’s old suit, Scott needs to break into Pym Tech and steal all of Cross’s research, including the new suit Cross has built… thereby saving the world, of course! 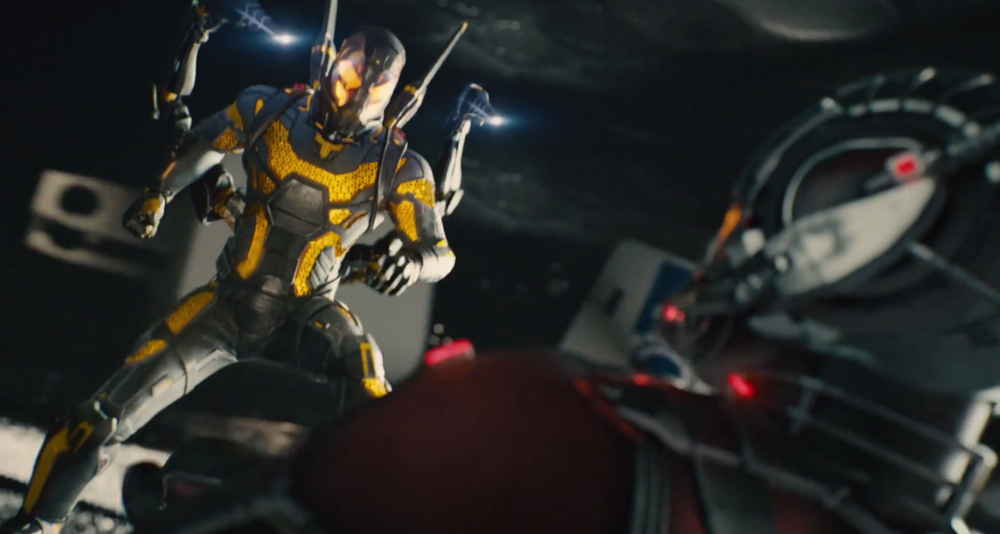 Think of a totally cliché trope of the superhero genre and you’ll probably find it somewhere in Ant-Man. Scott Lang is the epitome of the protagonist overcoming all odds to make good. On top of that, he has responsibilities – a cute little girl! Doesn’t it just melt your heart?! Even the crime that originally put him in prison was sort of noble, setting him up as a kind of modern day Robin Hood. How could the audience not be on side with this guy?

Hank Pym is the wise older man who spouts overblown nonsense advice while still being fatally flawed by his own personal hang-ups. Pym talks so much bullshit in the film I wonder how Michael Douglas managed to keep a straight face. He couldn’t be any more high and mighty if he tried, which makes the occasional attempts at humour unbelievably laboured. Bad guy Darren Cross is brought down by his own invention (with the nicely vague issue of the suit altering your brain chemistry – let’s not get bogged down in the details or even try to make it plausible folks!) and a lack of love from his adopted father figure (daddy and abandonment issues!). Meanwhile Hope has to deal with a distant father after the death of her mother – and, surprise surprise, she becomes a cold overachiever (with a very stiff wig).

A separate entity within a wider universe 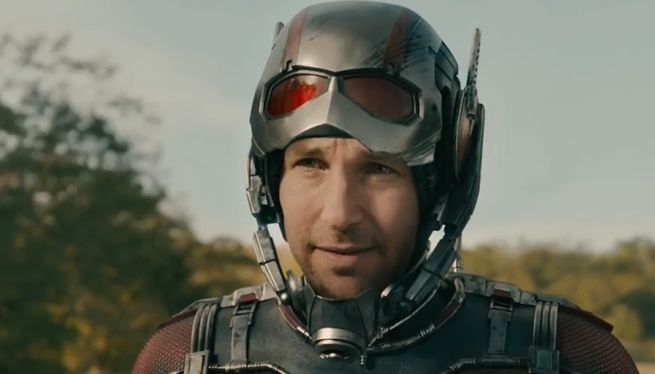 Marvel’s Cinematic Universe is a truly sprawling beast at this point. So far, they have stuck to characters and lore that have distinct personalities. Iron Man, Captain America, Thor, they all have very separate identities, archetypes almost, and are instantly recognizable to the audience. Then we were given Star-Lord, someone new to movie-going audiences but who was an instant hit – he’s the Han Solo of Marvel, how could it go wrong? Ant-Man had a much bigger question mark hovering over his head. Who is he and what makes him different to the other Marvel characters? After seeing the film, I wonder if they just went for bland – all the others have big personalities (except perhaps poor neglected Hawkeye), so we’ll just make Scott Lang bland… that makes him different!

Along with the titular character, the film itself also has very little in the way of personality to distinguish itself. Marvel has recognized that a lighter, more humourous touch works for them and pays dividends in the Box Office, but they failed to get a unique voice for the humour within Ant-Man. Without someone like Wright – or James Gunn – at the helm, all we have is the most average, ordinary superhero film a big corporation could churn out. Is this spelling the end of Marvel’s domination of the superhero film? I hope not. But perhaps they’ll learn that it might be worth their while to work with visionary directors rather than their current approach to filmmaking – by committee.

Verdict: Entirely average though entertaining enough. More for a Sunday afternoon than splashing out at the cinema though.

Previous: The Whispering Swarm by Michael Moorcock
Next: Not another live-action Disney remake