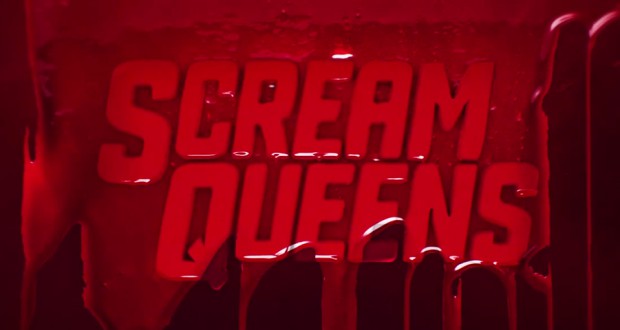 Were you missing watching a regular TV series that was kitsch, embraced clichés, and was hopelessly over the top? Ryan Murphy – as always – has the answer. Following his success with Glee and American Horror Story, Murphy (along with Glee co-creators Brad Falchuk and Ian Brennan) have mushed the two concepts together: horror with their own brand of outrageous, ridiculous humour. 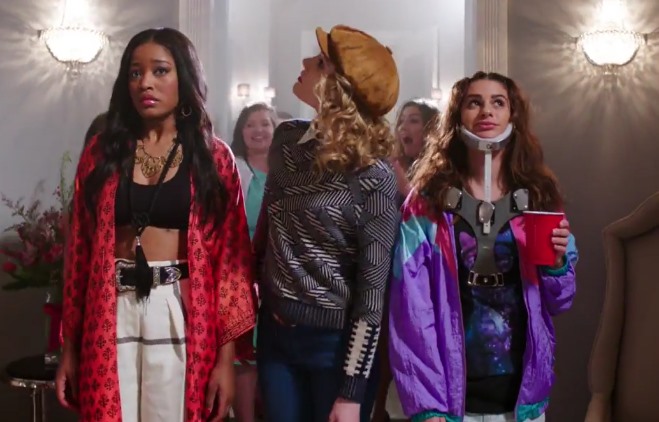 With all these well known genre tropes (from slasher to sorority films), there is a hell of a lot going on in the opening two episodes of the series. But like a lot of Murphy’s work, especially the hugely successful Glee, the reliance on stereotypes and caricatures (such as ‘deaf Taylor Swift’, ‘Neckbrace’, the Candle vlogger, the mindless minions, the insufferably stupid hot guy, and the sassy black roommate) never reaches parody status and instead feels mean-spirited. There are flashes of fun piss taking but ultimately these moments are neither original enough nor obviously social commentary to earn their place. And after the first two episodes, I’ve seen little in the way of subverting the genres the show is apparently lampooning (the Dean is exactly like any other Dean in a sorority film, Chanel is like any mean hot girl ever, and Grace’s ‘final girl’ fits the trop to a t).

The show is entertaining, but there is so much introduced in these initial episodes, you are left wondering where the story is going (other than the obvious places), where the focus is meant to be (Mean girls make nice? Revenge? Bad people get what’s coming to them?), and why we should care about any of these characters. Scream Queens is so surreal you are never able to believe it is taking place in our world, but rather some alternate Ryan Murphy world where slick production values win out over three-dimensional characterization every time.

The premise of Scream Queens is very simple. It is a comedic, sorority slasher series. Twenty years ago a mysterious death took place in the Kappa Kappa Tau house while a party raged. Today, a serial killer in on the loose. Coincidence? Of course not! Girls begin to die one by one. But who is the killer? And will any of them survive? 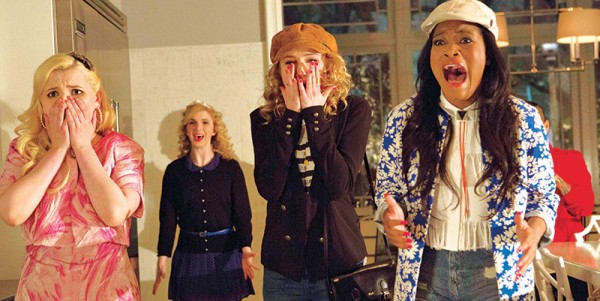 There’s no denying it is a fun premise for a series with plenty of plot and comedy potential. However, there is one glaringly obvious problem: this is a one-series premise. Scream Queens is not being sold as an anthology series like Murphy’s American Horror Story. Instead, this feels like Glee (where it quickly ran out of steam) or Desperate Housewives – these shows that have innovative set-ups that only last for one story arc. What happens once this mystery is solved? I can’t see how this could possibly make more than a season. 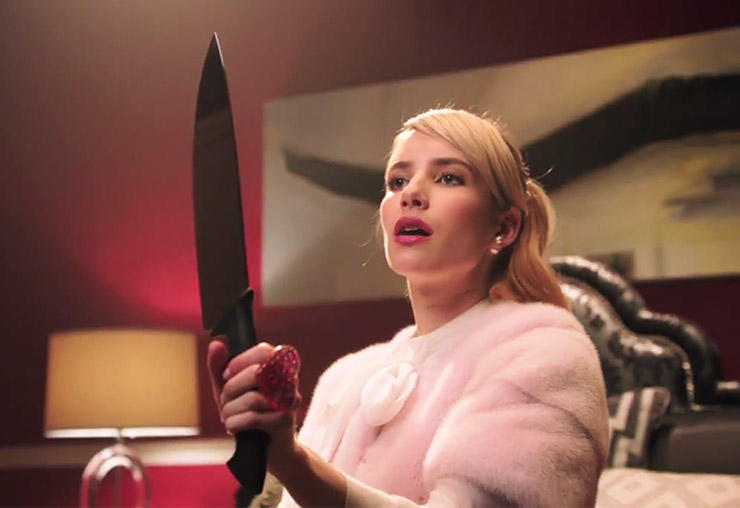 Another major problem with a series like this is sustaining audience interest. It is one thing for viewers to enjoy a slasher film, 90-minutes of killing off characters. But how do you keep that same audience rooting for people over such a long period when chances are the characters will die before the end? Of course, most of the characters are either deliberately heinous and unlikable or so under developed as obvious ‘Red Shirts’, so are we meant to root for any of them? Final girl Grace is so obvious and dull as to make her a very poor central protagonist, and so far I’m not getting the impression that Emma Roberts’ Chanel will go through a kind of mean girl transformation (though we know she can do it well, she was great fun in Wild Child). So why should I care about any of these caricatures? 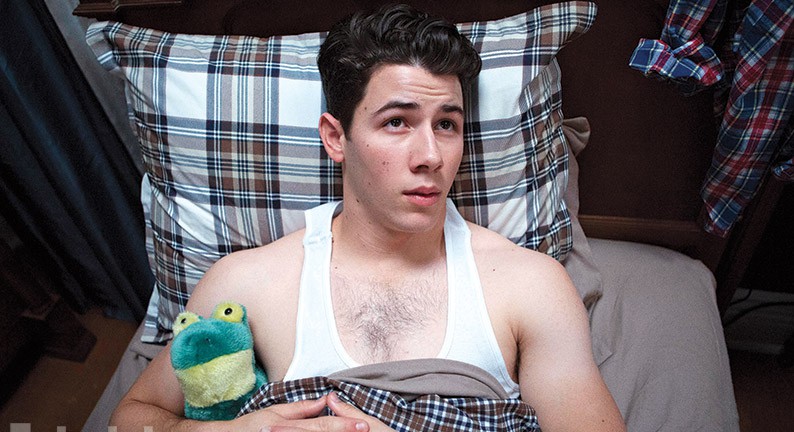 Scream Queens, despite its flaws, has a lot going for it. The production values are unbelievably slick. The soundtrack is brilliant, using just the right pop songs for the mood while invoking the horror films it takes off at just the right moments. On top of this, the cast is littered with real talent. Jamie Lee Curtis is an obvious highlight and delivers whenever she’s on screen. Meanwhile Emma Roberts commits to her queen bitch role with relish but never quite seems to pull us in. We all know Abigail Breslin is capable of great things, yet here she falls flat in every scene – unsure of where to pitch her character – is she a secret nice girl or the empty follower we’re lead to believe? Throwing in Nick Jonas as a ‘secret gay’ was a nice unexpected twist – I have to wonder what his evangelical family think of it?!

There’s no doubt that the series is entertaining. It sweeps you along with its outrageous dialogue and ridiculous plot. But the show’s creators need to decide what they are trying to achieve. If this is meant to be as empty-headed as a straight up comedy slasher, then do that, but if it is meant to be lampooning these stereotypes, they need to up their game significantly. Give us something subversive, something different, something ludicrously fun. At the moment, Scream Queens is teetering on the edge of hilarious and humdrum; it could easily go either way by the end of the season. 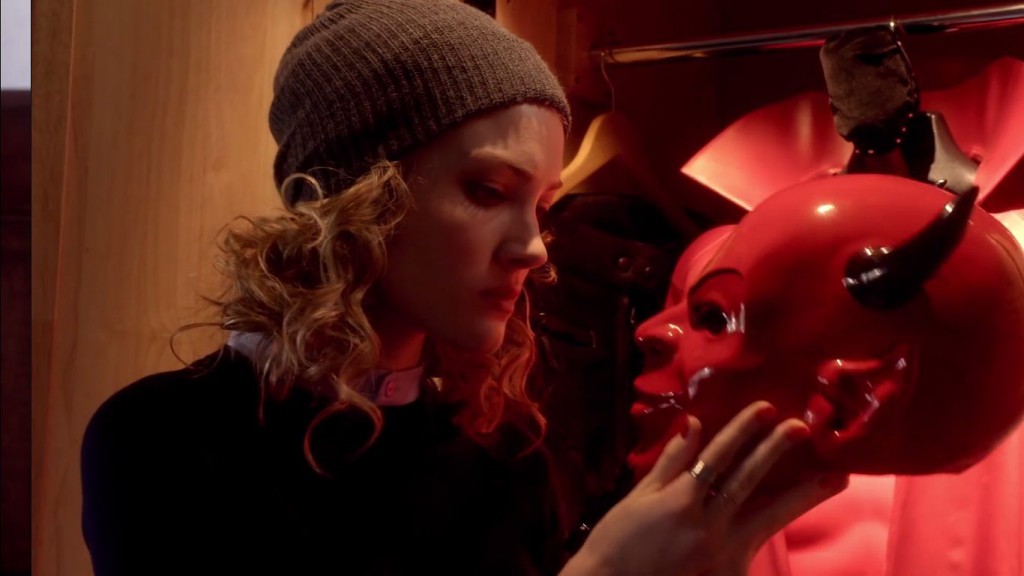 Verdict: The first two episodes of Scream Queens delivers on high production values but disappoints where it counts. While thoroughly entertaining, it is never so funny as to have you in stitches nor subversive enough to pique audience interests.

Previous: It Ain’t Trickin’ If You Got It: Music-Making For The Money
Next: The outrageous sexism of The Big Bang Theory