Home / Comment / Do andriods dream of Tom Cruise in glitter? 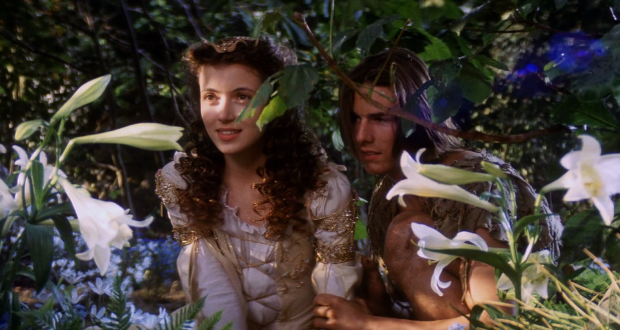 Within three years, Ridley Scott created one of the best science fiction films of all time and one of the worst fantasy films. How did this happen? What was he thinking? And why was Legend (1985) so awful?

When the film was first released, the general consensus was that it was woeful, being both a critical and commercial flop. Scott, and the film’s star, Tom Cruise, tended to blame this on the studio’s cuts. The studio required Scott cut the film down by a half hour, then there were different releases (including different endings) depending on the region. And the studio didn’t stop there either. The Jerry Goldsmith soundtrack appeared on the European cut but was replaced with pop music in America. Audiences have since claimed that the ‘Director’s Cut’ of the film is far superior – an opinion I don’t share (you can’t polish a turd, after all).

Ridley Scott is both a household name and well-respected director, and rightly so. He has directed some brilliant films, including Alien, Blade Runner, Thelma & Louise, Gladiator, and The Martian. But his oeuvre is not without its duds – and Legend is easily towards the bottom of that fetid pile. If you haven’t seen the film, let me just say this: there is only the barest hint of a coherent narrative in this jumbled, confusing, and nonsensical film. The actions of the characters make little sense, they hold beliefs for plot purposes only, and if it weren’t for Tim Curry’s captivating swagger, this film would likely have been entirely forgotten.

So how did the man who gave us Blade Runner get things so entirely wrong with Legend?

While I am never one to approve of Hollywood’s constant cycle of adaptations and remakes – I mean, come up with an original idea once in a while! ­– I have to acknowledge that Ridley Scott benefits from having a proven narrative to guide his films. Although Blade Runner was a heavily altered adaptation of Philip K. Dick’s Do Androids Dream of Electric Sheep?, the outline of the plot was provided. When it came to making Legend, he has been quoted as specifically wanting an original screenplay – not an adaptation – as “it was far easier to design a story to fit the medium of cinema than bend the medium for an established story”.

There’s no denying that Scott has a good directorial eye – his visuals are stunning. He understands tone and theme, giving each of his films a unique look and feel. But perhaps he is not as talented when it comes to generating story ideas. While the script was written by William Hjortsberg, Scott was the driving force behind the original idea. In future, perhaps Scott should stick to adaptations or original screenplays that exist without him directly engaging a writer.

You call that a plot?

Scott began work on the screenplay for Legend in the weeks leading up to Blade Runner’s pre-production. He approached novelist and yet un-filmed screenwriter, William Hjortsberg, for the job. Together, they developed the bare bones of an idea based on classic fairytales. While Scott filmed Blade Runner, Hjortsberg wrote the first few drafts of Legend. The script apparently went through fifteen drafts. I find it baffling that something they clearly edited and reworked a lot before beginning production could still turn out so completely nonsensical.

The film is a series of forced plot points that don’t even make sense as discrete scenes. What sets the story off is Princess Lily touching a unicorn, something that should apparently never be done. If that’s the case, why does the Unicorn approach her, bow his head, and let her stroke him? And why, after revealing that goblins shot the unicorn with a poison dart, does everyone still blame Lily for the world plummeting into darkness? None of the characters ever have any real plan other than to ‘fix’ the problem (or for the Lord of Darkness to make it so the world remains in darkness always, forevermore). But if your entire narrative motivation is based on a fallacy (at least, one that is never addressed as such) – that Lily caused the problem – everything that follows after it is frustrating for the viewer. And while Mia Sara’s facial expressions are powerful, they do not make up for the lack of context for her various decisions and character changes.

Both Blade Runner and Legend have very distinct, coherent, and imaginative visual worlds. Scott’s vision of a dystopian future tapped into noir and cyberpunk counter-culture. It was dark, gritty, and dirty – a world that was lived in and felt both futuristic and used at the same time. Meanwhile, his fantasy ideal had very different sensibilities. Where Blade Runner went for grime, Legend went for glitter. All over glitter. So much glitter that Mia Sara and Tom Cruise would have been picking the stuff out of cracks and crannies for years after.

As far as creating an immersive and coherent world, Legend is a success. The world is practically high on fairytales, with a surreal indulgence in bright colours, garish decorations, and going OTT on the ‘enchanted forest’ feel (the forest was built as a giant set, including trees built to truly enormous dimensions – 60 ft high and 30 ft in diameter). The constructed nature of the sets adds to the bizarre unreal feeling of the entire film. But somehow it works. All of the glitter and fakery is coherent within the film and does succeed in completely transporting the audience into Scott’s fantastical realm.

Despite the obvious accomplishment with the visuals (not to mention the brilliant make-up and creature design which won an Academy Award), the setting never manages to establish itself as a developed entity. This may have something to do with the deliberately surreal setting, but Scott’s decision to show as little of the ‘world’ as possible is a baffling one. As far as the viewers are concerned, there are only three locations – the clockmaker’s cottage, the forest, and the home of the Lord of Darkness. We see no indication of other humans or an established society. Lily is called a ‘Princess’, but we have no contextual clues to indicate that this world even has royalty…

The excess of the set design is mirrored by the indulgent script. While Scott’s plan to make a visually captivating art film set in a fantasy realm might have been a noble idea, its execution was half-baked. There is so much wrong with this film that I could go on… I could talk about the wooden performance by Tom Cruise, the twee and lengthy shots of unicorns frolicking, or the excessive use of terrible fake snow… but I won’t. Legend is an awful fantasy film by a talented director. Why he ever made the decisions that led him to create such dross will forever be one of the great mysteries of our time… or maybe we’ll just forget he ever made Legend. Yeah, let’s go with that.

Previous: Allied: Being good at this kind of work is not very beautiful
Next: Your Name: I feel like I’ve been in a strange dream