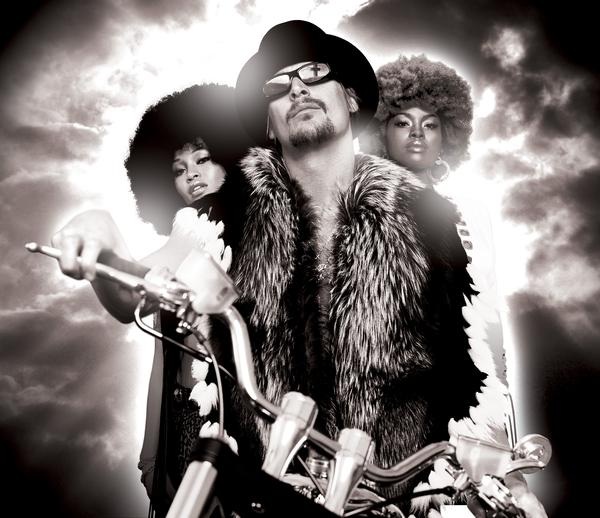 The last time I told somebody I was a Kid Rock fan, they prodded me in the chest and said ‘Odd – you seem real’.

Britain’s never really known what to do with Bob Ritchie. Aside from his breakout album and one hit single (the Lynyrd Skynyrd/Warren Zevon mash-up ‘All Summer Long’), he’s barely been on the radar here, even as a shorthand hate figure – that position taken by more straightforward transatlantic success stories, like Nickelback’s bluster rock or the hamfisted tantrums of Fred Durst. Kid Rock is an altogether more complex proposition. 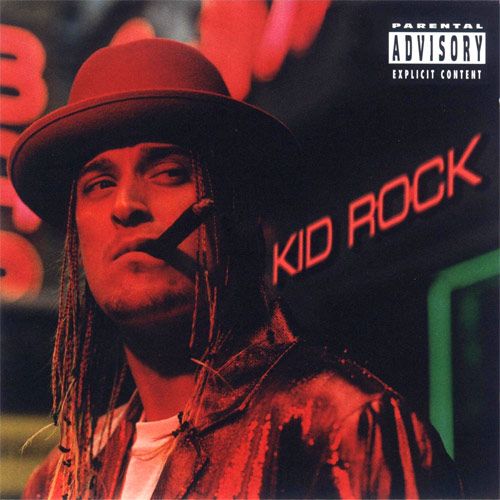 At nu-metal’s millennial peak, Kid Rock arrived with 1998’s Devil Without A Cause and the inherently ridiculous circus travelling behind it. Sporting full length fur coats, braids and a red fedora, and playing up the ‘white trash’ angle (‘I ain’t straight outta Compton/I’m straight out the trailer!’), Kid was still visually outdone by hypeman Joe C, stunted by coeliac disease to a height of 3’9 (‘with a ten foot dick’). DWAC was a good-time grab-bag of musical elements in the mould of that most postmodern musical genre, hip hop. It casts Kid as broke and arrogant, on the blag in modern urban life’s sweetshop of vice. It also, as nu-metal did, illustrated how segregated musical styles had become in the States, transgressing the boundary between hard rock and hip hop being seen as so revolutionary (despite myriad precedents) in an era bringing mainstream success to artists like Tricky, Radiohead and Bjork.

It wasn’t just rap and rock Kid combined though. DWAC set out his stall as an everyman. Recognisable musical archetypes Kid laid claim to on record and in image were as an inner city rapper and DJ, a stoner, pimp, rock star, and the neurotic angst of grunge; but also a working single father and increasingly a backwoods country man, a suburban rock fan, a Southern rocker and a celebrity. His image was caricaturesque enough to easily allow Warholian doubles: white vest, red fedora, long hair, wraparound shades and anyone could be the everyman. (He became a Simpsons character with ease.) But rock stars dressing up in easily recognisable roles for videos has become a tired idea. So which was the true Bob? Well, actually kind of all of them.

Born in the suburban small town of Romeo, Michigan, Bob Ritchie grew up the son of a car dealer, on a property with a six acre orchard, but at 15 ran off to the larger town of St Clemens, becoming a dj in the Beast Crew (and sporting what Fresh Prince fans know to be the ultimate ‘do – the high top fade). As his career took off, extensive touring and a raft of open drug use established the rock star reputation, but at the same time Kid was raising his son as a single father. The relationship that produced his son, his relationship with his own father and his high school girlfriend’s termination all led to more confessional tracks – the most striking of which being the tortured ‘Abortion’, in which Kid considers killing himself to reunite with his unborn child, the second coming of Jesus, rendered ‘God himself in a jar’ by the procedure. Even the only identity foisted on him – celebrity – is due to a five month relationship with Pamela Anderson, and success brought him a 50 acre ranch in rural Northern Michigan. Each of these facets of the life of Bob Ritchie is blown up with signifiers to create another side of the Kid Rock persona. The only role not supported in fact is that of pimp, used in a way since familiar – not unproblematically – in mainstream culture through Xzibit’s Pimp My Ride show and the persona of (confessed actual pimp for a time) Snoop Dogg.

Kid wasn’t short of co-signs for these claims either. Even before fame broke, he’d toured with Ice Cube and Too $hort at 19. He joined Aerosmith behind the decks while inducting them into the Rock And Roll Hall Of Fame and is personal friends with top of the metal tree Metallica, joining them onstage for covers of Bob Seger’s ‘Turn The Page’. He’s appeared on record with ‘the Beatles of rap’ Run-D.M.C., Slash, Snoop Dogg and Eminem (who appears on DWAC in return for Kid’s scratching on The Slim Shady LP), as well as newer figures like Yelawolf.

There was always a suspicion in nu-metal that these whiteboys would revert to rock, with its career longevity, when trends moved on, and there’s a stark shift between the cover of DWAC (Kid in braids and leather jacket, peering suspiciously from beneath the brim of his fedora, in a nocturnal scramble of neon signs) and that of 2010’s Born Free (kicking back in a convertible under sunny blue skies as fields roll into the distance). Age, success and the passing of Joe C may have all contributed to the atmosphere of that album, but the country elements in the Kid Rock sound had been becoming more pronounced since Devil’s awkwardly balanced official follow-up, Cocky. The Southern rocker persona may be the most unfeasible – Romeo, Michigan sitting 40 miles from the Canadian border – but while critics scoffed at Kid cheapening the obvious ‘Sweet Home Alabama’ sample of ‘All Summer Long’ as the song sold trailerloads, they overlooked that Skynyrd’s own Billy Powell had been happy to re-record his piano parts for it! And ZZ Top’s Billy Gibbons features on the tune that is Kid’s ‘Hillbilly Stomp’, featuring surely the most country hip hop boast in ‘Where I come from mudflaps come stock!’

Such collaborations, and heavy genre identification, also make good marketing sense – Kid offering a cross-pollinating crossing point to younger, untapped audiences. And the tropes don’t just suit music marketing, Kid currently endorsing Jim Beam and Harley Davidson. In many ways the postmodern stramash of Kid Rock’s pick-n-mix assemblage looks like the epitome of bad taste, but his populist approach, and the fact genres rarely appear in isolation in the oeuvre, mean he’s managed changes in direction without losing his audience. And success affirms his validity. The success of the ‘Picture’ duet with Cheryl Crow opened the doors of country music, for collaborations with Willie Nelson and Hank Williams Jr. (It’s interesting to note though that Hank Williams III, a frequent collaborator with metal frontman Phil Anselmo, was critical of his father working with Rock, not on the grounds that he wasn’t country but that he was pretending to be something he wasn’t.) 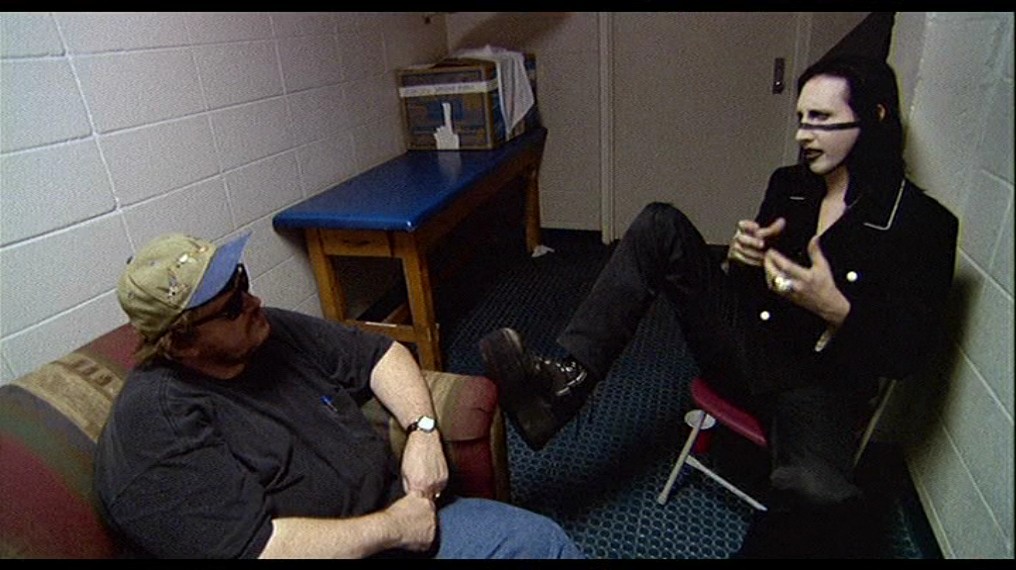 Marilyn Manson’s appearance in Bowling For Columbine gained him widespread respect but neutered the satirical power of his persona. The country music persona of Born Free didn’t renounce anything that came before, but just added another side to the Kid Rock character. Compared to mixing rock and rap, Kid’s palette is far wider. He performed with Lil Wayne at the Country Music Awards! No matter the more complex ideas and emotions the more mature Kid might venture into though, there’s always part of the character that appreciating the simple pleasures of strippers, beer and cocaine, motorbikes and cigars. He can follow up a serious emotional point with a lowbrow sex gag, just as a postmodern novelist will. It’s fitting that this core of the Kid Rock persona is best encapsulated in a song not written by, or even for, him, in his cover of John Eddie’s ‘Lowlife (Living The High Life)’ (sample lyric ‘I got kids I never seen, and their momma’s seventeen – I’m a lowlife’). 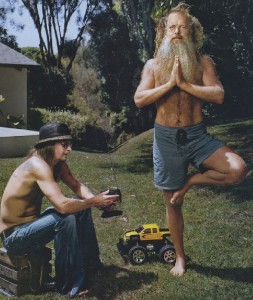 When production guru Rick Rubin assembled a crack team of musicians (from Los Lobos, Red Hot Chilli Peppers, Tom Petty’s Heartbreakers) for the Born Free sessions in 2010, it made for Kid Rock’s most consistent, if not his most interesting, record. It’s worth noting that all other Kid Rock albums have been produced by the man himself. From hip hop to hard rock, country to gospel, these performances are being created and assembled, not just recorded. Credit for the adaptability of the Kid Rock sound is also due to the amorphous band of musicians he’s assembled in the Twisted Brown Trucker band. Unrestricted by time period – frequently dipping into styles such as a ‘70s rock feel – Kid’s musical adventures are unstuck in time. The heavy referencing of other bands from Cocky on acts like he’s writing himself into the pantheon of rock history, as well as letting slip this is a man who could tour you around a large and beloved record collection. He’s an auteur of sleaze rock. A curator of American musical culture. 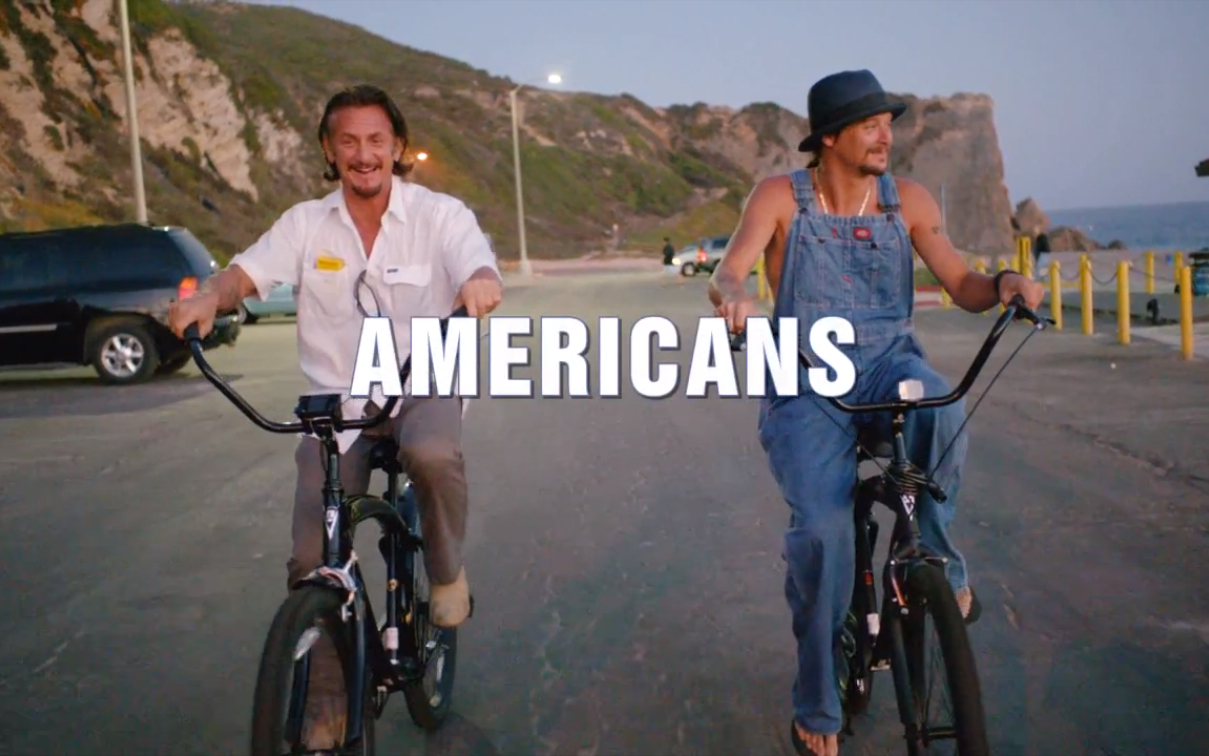 Maybe you’re not convinced. Ok, he uses all of these tropes; he gathers this mixing pot of musical elements from across types and time. But he’s so humble and down home in interviews. Is he really doing this stuff deliberately? Maybe he’s just postmodern through virtue of living in the postmodern age? Well, I give you the short film Americans, initiated by Rock and co-starring Sean Penn. Kid Rock has met virtually every living US president. One of the things about him that chimes oddly with Brits is his patriotism. The earnest pride and celebration of landscape seen in the ‘Born Free’ video would suggest a tourist board ad or outright parody from a British perspective. But while the flag waving of a Kid Rock stage set might bring to mind BNP rallies if done with union jacks, it’s something still taken very seriously by Americans, as Lil Wayne illustrated recently. (The US interestingly allowed itself a air of pessimistic millennial self-criticism just as the UK engaged in some uncharacteristic flag-waving optimism.) This isn’t to say Kid is a straightforward Republican either. In favour of smaller government, pro-gun and in the ‘don’t care’ camp on equal marriage, he’s also openly pro-choice and inevitably not a supporter of the war on drugs; a staunch supporter of US troops, performing regularly for the USO, but not necessarily of the wars they’re fighting. 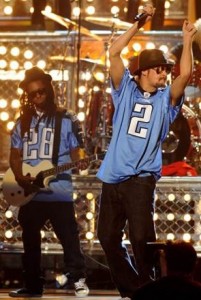 Another stark example of Kid’s ability to switch markets is his public endorsement of Obama in ’08… and Romney in ’12. Americans is a response to reactions that Romney endorsement received, using an awareness of the Kid Rock stereotype. As he and Penn embody all the negative aspects of their public personas, the point is made that overly rigid partisanship – as there was in music; as there often is in politics on both sides of the Atlantic – needlessly prevents dialogue and stifles debate. The Kid Rock sound is above all open to new influences (he credits Atlantic Records president Ahmet Ertegun with his appreciation of jazz). While his music toyed with the rigid archetypes of musical styles, it also transgresses them for a richer sound, in much the same way as rather than narrow political definitions, people should be engaged with as people, inconsistent and expansive as they may be. In our own way, maybe we could all benefit from putting Lil Wayne onstage at our Country Music Awards. Even if he is shit-awful on guitar.