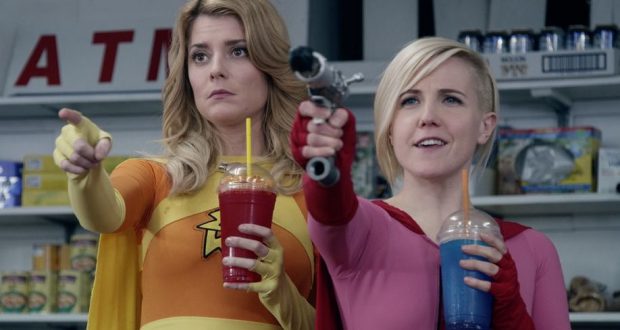 Superhero spoofs have been done before, from the broody to the ridiculous, tackling issues inherent in the tropes of the genre to those that shy away from controversy entirely. Being unaware of Grace Helbig or Hannah Hart and their YouTube fame, as well as the 1970’s TV show on which the film is based, I went into the feature film incarnation of Electra Woman and Dyna Girl eager to see a feminist take-down of familiar superhero tropes. And up to a point, there are some nods in that direction (the outfits aren’t overly revealing or completely impractical!). Unfortunately, it never goes far enough. When all is said and done, the film is an entirely predictable tale of fame and fortune splitting up the gang – the tale of a thousand struggling bands made into a story of female superheroes. Snore. 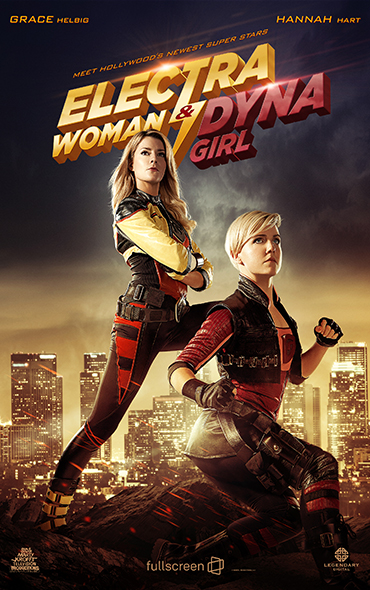 It’s a difficult field to step into. Parody is always a tricky line to tread and the superhero parody landscape is already well-populated. Watching the film, I felt Helbig and Hart were aiming for something along the lines of My Super Ex-Girlfriend and a non-musical version of Dr Horrible’s Sing-Along Blog. The trouble is, it wasn’t batshit crazy enough to get what few laughs the Uma Thurman film made nor as subversive and downright funny as Dr Horrible to make much of an impact. To be honest, not once was I moved to laugh out loud. And I love to laugh loud and free in the comfort of my own living room (there’s only the cat to judge me).

I really wanted to like this film. Two women creating their own properties and moving from YouTube to a film produced by Legendary Entertainment (aka a Hollywood studio)? Hell yes! Go girls! And while Helbig and Hart are likable, the plot was so completely unoriginal and added nothing to either the superhero genre itself or parodies of it. It simply wasn’t very good.

The world is full of superheroes after the fallout from a large superhero war. Since the war, there haven’t been any supervillains. The result? The heroes have become complacent.

While many of the superheroes do have superpowers, some still claim the ‘super’ title without any extraordinary abilities. Two of these heroes policing the streets of Ohio are Electra Woman (Grace Helbig) and Dyna Girl (Hannah Hart). When they see their fellow superheroes cashing in on crime fighting, the two women head to Hollywood to find fame, fortune, and more opportunities to make a difference. But success comes at a price and their friendship is quickly pushed to the limits. 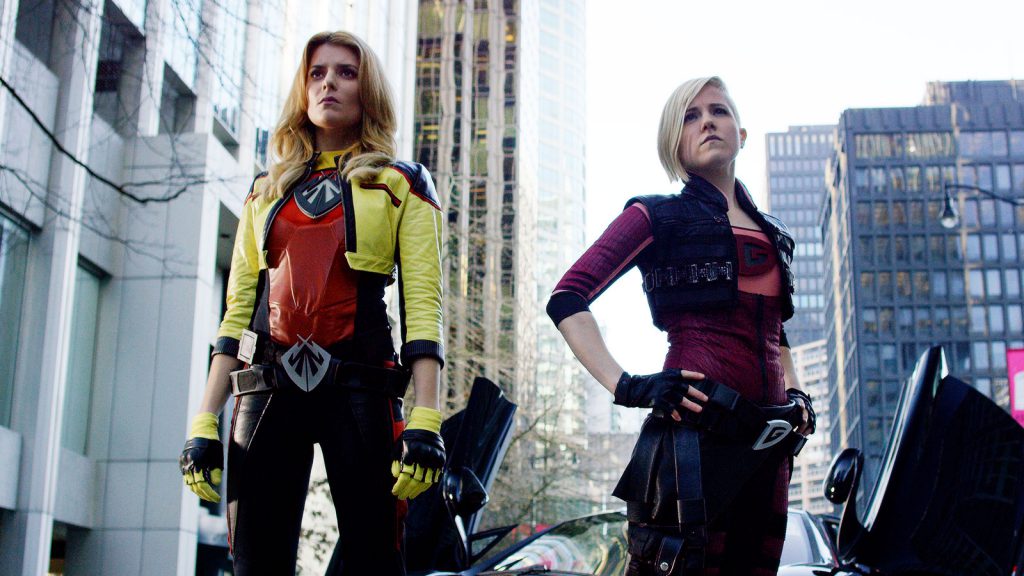 The story reads like a straight out of a community college course on scriptwriting. The most basic rules of storytelling are used here (for instance, never introduce named characters that won’t be important later). And yes, those rules are good to learn, but if you want to make something different or interesting, you need to move past them. Beat by beat, any scriptwriter schooled in the basics could plot out this film given only a high-level impression of the premise. Perhaps my issue with the regurgitative, unoriginal story is my own fault, after all, I went into the film looking for something that had something to say. However, when you start a film and after five minutes can predict exactly how things will turn out, the experience won’t be one of your most memorable.

There’s no clever or particularly funny humour at all. The only points where the script managed to get me to even crack a smile involved childish, gross-out humour. Yep, you guessed it: poo and fart jokes. You can’t go wrong with them. Otherwise, the jokes were so obvious, they were hardly jokes at all.

Having said all that, it is nice that the film remains staunchly grounded in issues of friendship, staying clear of any romance. Who needs it? This, along with the chemistry of the two leads is what makes this film average rather than appalling. It’s at least watchable, which is more than I can say for a lot of big budget Hollywood films. 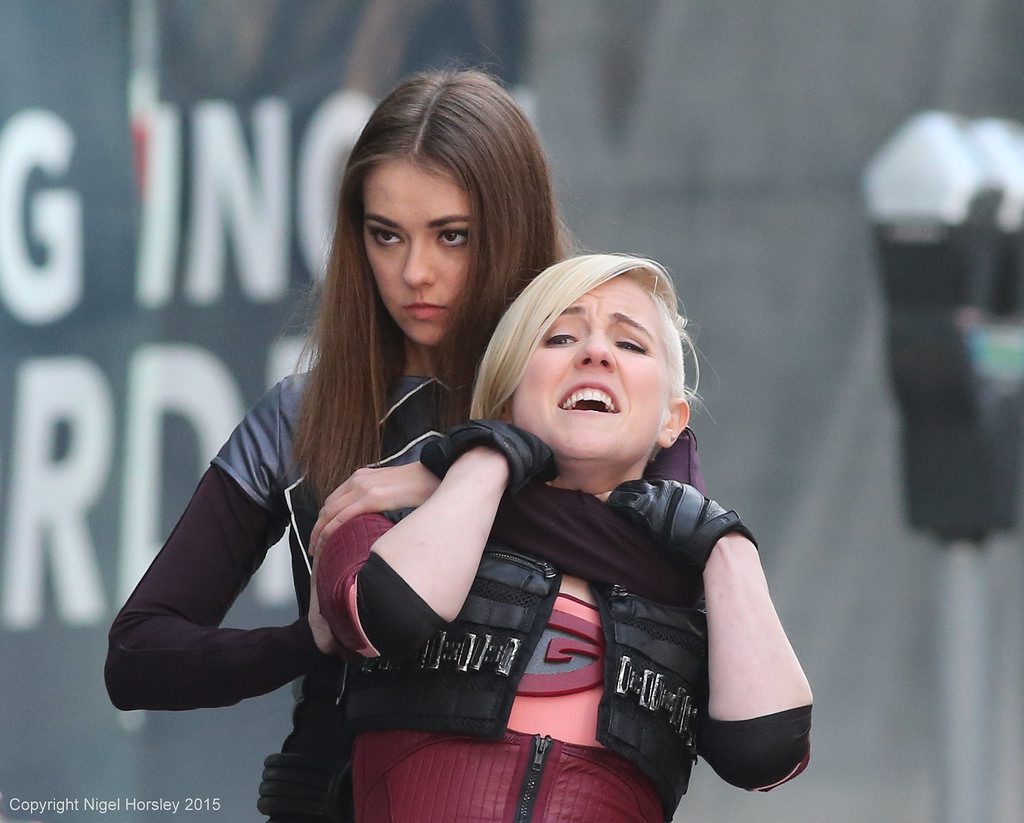 A tale as old as… capitalism?! In our age of constantly vying for the attention of others, be it as a pop star, actor, writer, or social media user, the allure of fame calls to many. But we must be careful what we wish for. Just like lottery winners might have to worry about murderous family members, anyone seeking fame and success needs to watch their back. Not only will others be out to get you, you may fall prey to the dreaded ‘change’ that, if we believe the Hollywood drivel always happens, you may destroy yourself. Don’t worry, this is still Hollywood. You’ll let success go to your head, you’ll act like a tosser for 15 minutes before realising what really matters in life. SOMEONE GET ME A BARF BAG.

Similar to the recent Jem and the Holograms film that was so awful the studio pulled it from general release early, Electra Woman and Dyna Girl is the story of friends making it big and bailing on their original ideals. I know they say there are only a handful of stories, so we will necessarily constantly recycle them, but this kind of regurgitation of something we’ve seen 100 times before is lazy, dull, and insulting to anyone who pays good money to be entertained for 81 minutes of their life.

Verdict: Electra Woman and Dyna Girl is entertaining as long as you aren’t looking for anything original. It’s never truly bad, but it also never manages to lift itself out of the realm of entirely average.

Electra Woman and Dyna Girl is available on iTunes or from their website.

Previous: Breaking the Glass Slipper: Interview with Ben Peek
Next: How to write an action blockbuster according to Independence Day