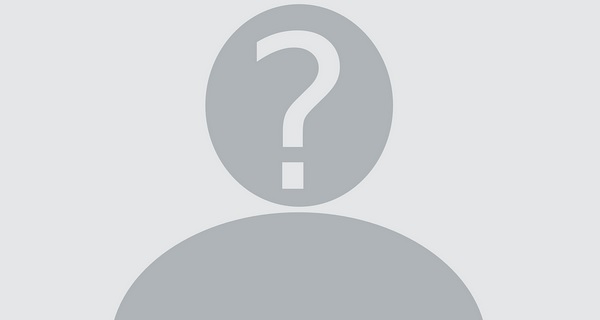 ‘What’s in a name? That which we call a rose
By any other name would smell as sweet’
– Juliet, Shakespeare’s Romeo and Juliet 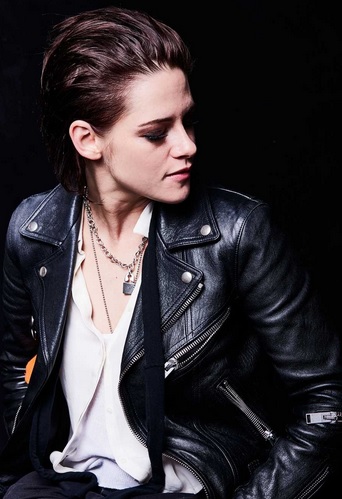 I want you to close your eyes. Now, one at a time, I want you to picture each of your friends; each close friend that’s important to you. And now, in the same order, I want you to picture their genitals. I mean, you can do that, right? It’s really the only way to know their gender for sure (aside from DNA testing) and if you don’t know who they are for sure, how could you really trust them?

It’s 2017 and culture is being asked to get to grips with the question of ‘What do you identify as?’, which is a more polite form that falls somewhere between ‘What are you supposed to be?’ and ‘Who the hell do you think you are?’ In a world where children are routinely told ‘Be yourself’ and ‘You can be anything you want to be!’, the terms and conditions of those offers are being brought sharply to light.

‘I’m both and I’m neither, and I’m a ladyboy and I’m a lady, and […] I will punch you in your fucking face if you touch me’ – Mina Caputo, Life of Agony 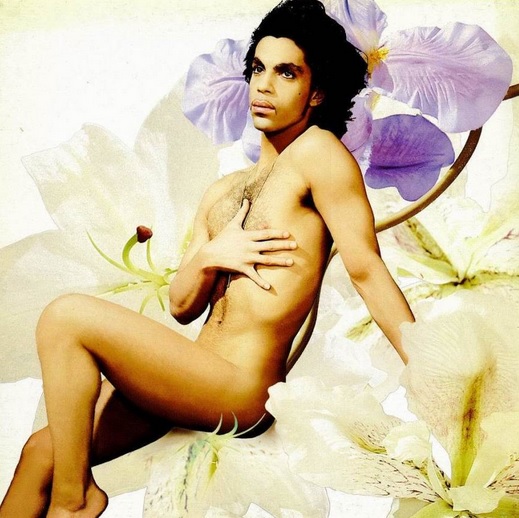 Of course, creating your own identity is nothing new to pop culture. Last year saw praises being heaped on the transgressions and reinventions of both Prince and Bowie – or Misters Nelson and Jones, by birth. (Even if that arm around Mick Ronson’s shoulder during ‘Starman’ and the cover of Dirty Mind did later give way to having always been a ‘closet heterosexual’ and telling Wendy & Lisa they could rejoin the band if they ‘renounced’ homosexuality.) The year zero attitude of punk brought the creation of new identities to more freely speak their truth: larger than life but all too believable figures like Johnny Rotten and Eve Libertine, Darby Crash and Jello Biafra, Richard Hell, Lux Interior and, of course, The Ramones. Self-identification could cut the apron strings to all that society told you that you would have to be. It lets you tear up the role that had been written for you and compose your own newer, truer character from scratch. What could be more punk rock than that? 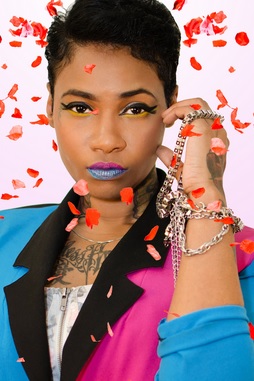 At the same time, a fondness for personas and aliases grew to be a central feature in hip-hop, just as it had been for blues players like Muddy Waters and Howlin’ Wolf. Much as Nation of Islam members like Muhammad Ali (formerly Cassius Clay) and el-Hajj Malik el-Shabazz (Malcolm Little, or Malcolm X) cast off the ‘slave names’ bequeathed to them by American history, in favour of names reflecting their faith, so rappers have long discarded their ‘government name’ in favour of ones they chose. Names drawn from tv and comic books, wordplay and true crime; from pop culture in general. There’s a very real reason why Ghostface Killah (a.k.a. Iron Man, a.k.a. Pretty Toney) wore a stocking over his face during the photo shoot for Wu-Tang Clan’s 1993 debut, Enter the Wu-Tang (36 Chambers) – his real life alter ego Dennis Coles had warrants!

‘I wanna put the whole world in drag but
I’m starting to realize it’s already like that’
– ‘Serving Goffman’, PWR BTTM 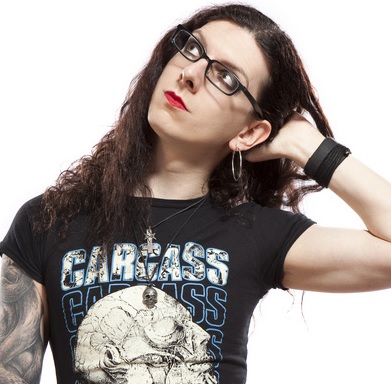 Self-made identities are a central feature of western individualism’s mythology, from cowboys and gangsters through superheroes to hackers, but it’s also standard practice on the social periphery, where society can reduce who you are to just what you do. Like entertainers and internet trolls, drag queens, porn actors and sex workers all routinely adopt a new name, and persona, with their occupation, to put some distance between themselves and the ‘straight’ world. As Oscar Wilde noted, a mask may not just protect you but also let you more freely express your true feelings. Consider the drab homogeny of a British car park. Couldn’t life use a little more unguarded self-expression?

Building new identities is also increasingly necessary in our postmodern collapse of time. While web 2.0 gathers us in isolated silos and social media echo chambers, it also ensures that everything we do is recorded, surveilled and displayed. We live in a world where, within hours of someone being elected leader of a political party, we can verify their opinion on the last instalment of the Fast and Furious franchise. Tom Hardy’s vanity project Taboo may have been a gothically atmospheric tour de force of incest and witchcraft, anti-colonialism and oversized hats, but it can’t erase the fact that he once told MySpace ‘I’m cooking a turkey yo’ while doing this face. The internet has developed an omniscient ‘I kent yer faither’ attitude to keep you in check and stop you rising above your station. So to put some distance between who you find you truly are and a past that you had no control over, why wouldn’t you demark a new you?

‘I’m more impressionable when my cement is wet’
– ‘Greetings to the New Brunette’, Billy Bragg 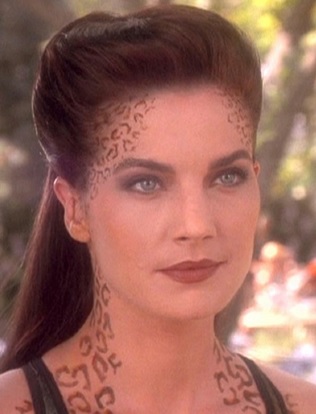 Pop culture offers a space to explode and explore the concept and possibilities of identity. A perfect example being Star Trek: Deep Space Nine’s Jadzia Dax (and yes, lest we forget, those markings do go ‘all the way’ down). A product of the Trill species’ biological equivalent of reincarnation, Dax is a dazzlingly attractive young female with more than 300 years’ worth of memories, frequently addressed by the captain as ‘old man’. Age, ability, species, experience, appearance, behaviour – all aspects of identity are open in fiction, offering the opportunity to experience life from vantage points vastly different to your own. Groups of people are still individuals – complex within themselves rather than moving in murmurations – and the fastest route to understanding can often be walking in their shoes. Fiction can give us disembodied consciousness, artificial lifeforms, shapeshifters and those with a non-linear perception of time, but for every bipedal creature we still need to be certain of whether they’re boy or girl? How uninteresting can characterisation be that central to your characters’ appeal has to be the thought that the reader could possibly want to fuck them? 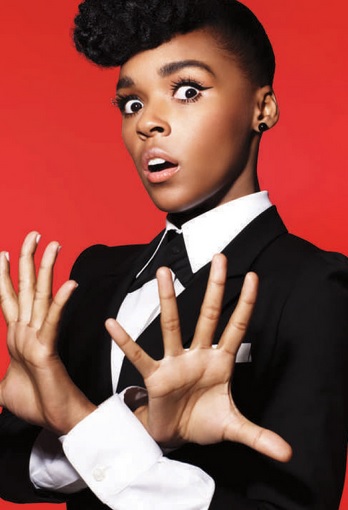 So who’s really getting ‘offended’ here? Those claiming censorship for not being allowed to say whatever they want, to whoever they want, while demanding that others restrict their appearance because difference might make them uncomfortable? Getting used to new names or changing pronouns is difficult, it’s a new skill to be learned, but is a different name really a big enough inconvenience to have an actual impact on strangers’ lives? How can you be expected to create the world around you if you’re not even permitted to recreate yourself?

When it comes to society’s understanding of identity, bathroom doors may sport the simple shapes commonly used to convey ‘men’ or ‘women’ but the situation’s actually a lot more nuanced than that. The range and variety of humanity is far broader than pop culture all too often reflects, and maybe this is just the first of many overdue questions of identity that it can help society chew over.

Surely it’s time to recognise that this is a world where in fact, as Hamell on Trial has the brutally murdered Matthew Shepard say in his crushingly beautiful song ‘Hail’, ‘No, we can be who we want to be’. And equally, as questions are being asked and conclusions considered, it’s important not to get caught up on terminology over intentions; don’t rush to fill a liminal space with rules, as some punks did. As self-identified ‘old cis white motherfucker’ Patton Oswalt noted, ‘evil people learn the correct terms really quickly’, to turn them to their advantage. When meeting new people in this age of self-discovery, always ‘listen to their heart’. 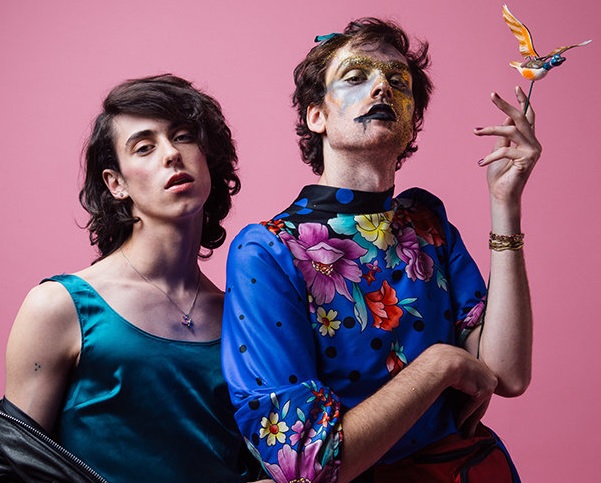