Home / Film / The Death of Stalin: We need change 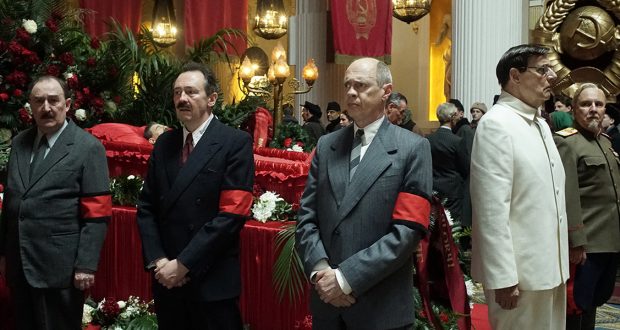 The Death of Stalin: We need change

Censorship! State execution! Gulags! This is the stuff great comedy is made of. The Death of Stalin is an adaptation of a French graphic novel being brought to the screen by satirical maestro Armando Iannucci. The helmsman behind The Thick of It and Veep turns his gaze to a historical setting for once, where he picks apart the brutal absurdity of Stalinist Russia and the grasping power struggles that commenced immediately after the dictator’s death.

The Death of Stalin is unequivocally funny. Some of this is rooted in historical fact: the film opens with a broadcast classical concert which must be performed again from scratch when it turns out the great leader himself wants a recording of the live performance. At other times, we rely on Iannucci’s ability to make the terrifying and powerful seem utterly ridiculous. The desire to bask in glory as you abuse your power and neglect your responsibility is a worthy reason to be mocked.

A veritable collective of laughter 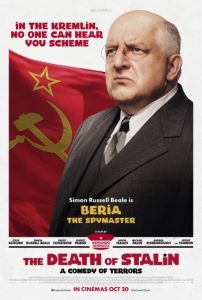 The film and its source material offers a truncated view of the events following Stalin’s death with the crucial conniving compressed into a few days. The trailer would have you believe that this is a free-for-all between a host of potential successors. Although the story does feature an array of characters who are cartoonishly embellished from history, this swiftly becomes a two-way conflict between the ever-exasperated Chairman of the Central Committee – Nikita Khrushchev – and the sinister head of the NKVD – Lavrentiy Beria.

The cast is strong across the board and Iannucci recognises the necessity of having very different personalities clashing for the drama and comedy to be optimised. You can only do so much with every character being a self-interested master manipulator. As such the pompous and ineffectual Malenkov (Jeffrey Tambor) vacillates to great (by which I mean ‘little’) effect, whilst the wiley Molotov (Michael Palin) flounders after decades of being cowed by the Stalinist party line. Amongst the supporting cast, Jason Isaacs and Andrea Riseborough standout for their impeccable ability to deliver absurd lines with utter conviction.

The backbone of the film is deflating the self-importance of, essentially, monsters 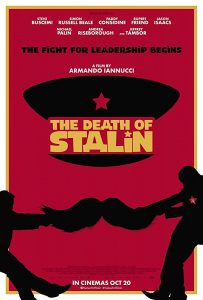 But in the end, in both plot and performance this is a showdown between Steve Buscemi’s Khrushchev and Simon Russell Beale’s Beria. Buscemi does a great job of showing Khrushchev’s emergence from hapless second-tier bureaucrat to an ambitious politician, but Beale surely wins out. Whilst this film is riven with humour, it makes no attempt to mask the horrors of the Stalinist regime, which were in large part orchestrated by Lavrentiy Beria: Beale is more than a match to play up to this. His reptilian spymaster is utterly chilling and the most exemplary part of the film.

If anything the greatest distinction about The Death of Stalin is that it satirises a brutal dictatorship but never trivialises its subject matter. Every scene is riven with the fear that has flourished in this mad power structure. Whilst by no means graphic, the film doesn’t shy away from dark territory. Gulags and executions aside, the horrific amount of rape and sexual abuse conducted by the leader of the NKVD is made an explicit element, and one which some might be sensitive to with the ongoing Weinstein scandal. The film is not a bleak or harrowing experience, but it walks a fine line between its satire and its commentary on cruelty. Those expecting something as chipper as Veep had best be warned.

Verdict: The most fun I have ever had in a film about an authoritarian terror state.

Previous: Calls for Submission by Selena Chambers
Next: The Snowman: He’s taunting us…